Voyager vs the Asteroids.   Originally broadcast on Feb 26, 1997 this is Rise. 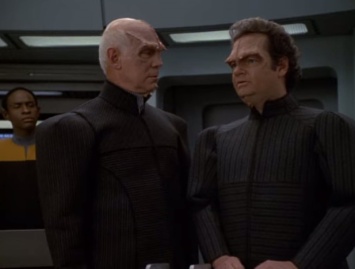 While defending a planet from Asteroids, Voyager only manages to fragment the incoming rock of doom causing it to scatter across the planet. Thankfully the fragments land in unpopulated areas…yes lucky…but another asteroid is on its way and is expected to hit a largely populated area.  Getting an unclear message from Doctor Vatm indicating that the asteroids may be artificial, Voyagers sends a squadron of shuttles to find him and bring him back.

Tuvok and Neelix accompany Ambassador Sklar’s assistant to the surface but are forced to make an emergency landing.  While inspecting the damage they are greeted by the very man they are looking for, Dr Vatm, but he refuses to reveal his information around the others nearby. Since it seems their shuttle is unable to contact Voyager, Neelix suggests using a nearby Orbital Tether to grt into the atmosphere and contact Voyager to complete their mission.  While it seems the Tether is damaged, Neelix is convinced that he can fix it as he spent two years on Rynax on a Tether maintenance team.  They are soon attacked by a woman named Lillias who is using the broken Tether transport as a home.  Although reluctant to let them in, she finally gives in when the group offer to take her with them.

On Voyager Torres discovers the secret that Sklar is protecting when they beam aboard some of the Asteroid fragments…it seems the Asteroids are artificial. Things get worse when they learn that a large asteroid is expected to hit the planet in less that two hours and Tuvok’s team is missing. Things get even worse when an alien ship arrives claiming the planet for themselves and begins to attack Voyager.

Back on the surface, Tuvok and his group begin their accent, after a scuffle with Sklar who is desperate to get to Voyager with his findings. With a damaged oxygen converter, Tuvok and Neelix do all they can to ensure that they make it to the atmosphere. As Neelix works on the repairs he finally admits that he has never actually worked on full size carriages but models which were identical but much smaller. Just as Tuvok is about to retort, they are interrupted by a fight between Lillias and Vatn.  Lillias is attempting to toss Vatm out of the carriage but is stopped by Tuvok.  Hanjuan, a miner who was accompanying them, insists on getting Vatm’s data, threatening to throw him out if the data is not supplied.

Tuvok manages to get the situation settled but the group soon begins to start suffering from carbon dioxide poisoning.  Soon Dr. Vatm tries to jump out of the carriage, claiming he has to do something on the roof but, before he can get out, he dies of shock.  Finding traces of the coolant used on the tether couplings in the Doctor’s water bottle, Tuvok surmises that the man has been murdered by someone on board.  Neelix insists that they stop the carriage to investigate what Vatm was concerned with which sparks an argument with Tuvok.  The two have a heated argument, with Neelix basically calling Tuvok out on the Vulcan’s tendency to be a condescending jerk, causing the Tallaxian to stop the carriage anyhow in order to check the roof.

Tuvok goes to the roof to find a data pad but is attacked by Sklar who attacks Tuvok.  The two grapple but Tuvok is pushed from the carriage only to hold on at the last moment. Sklar returns to the group and demands that they continue their ascent but it seems that Neelix is too hurt to respond.  As Sklar and the others attempt to get the carriage going again, Neelix spots Tuvok in the window and lets him in.  After a brief fight, Sklar falls out of the carriage and Tuvok contacts Voyager with information to defeat the aliens.

On Voyager Neelix explains the situation to Lillias indicating that these aliens known as the Etanian Order create ‘natural’ desasters in order to invade planets for theimselves.  Vatm found out about this but was killed by Sklar who was in cahoots with the Etanians/  Tuvok presents Neelix with a commendation, and the Talaxian gets a kiss from Lillias for his bravery. Neelix and Tuvok bicker again about Tuvok always wanting the last word….which he does in fact get.

No.  No.  Not at all. This is a terrible episode that honestly does not make any sense when lined up with the rest of the series.  While writer Jimmy Diggs did manage to write a solid episode for DS9….his Voyager attempts have been…lackluster at best.  So far he has introduced the ridiculous Teen Pregnancy Episode Elogium and now this… 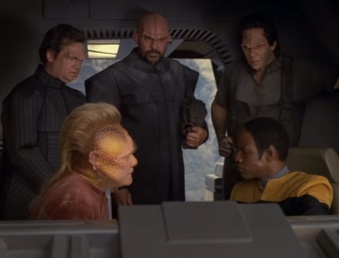 The problem with Rise is that it feels like it was written by someone who really hasn’t been watching the show and is not intimately familiar with the characters.  The confrontation between Neelix and Tuvok is fun and all but, it seemed to have been solved already with no need to bring it back…yet here we are.  Not only that, the plot is straight out of the film Flight of the Phoenix even down to the model building lie.  I mean.  Sure, Phoenix was a great story but it really didn’t work here…especially so late in the series.  Plus nearly every event, from the convenient premature launch of the mag-lift to even the invading aliens all seemed less plotted and more convenient making this episode feel disingenuous at best.

While the story is pretty terrible, we do get a little more development for Neelix, despite his ridiculous confrontations with Tuvok.  This shows his continued attempts to work closer with the crew of Voyager and gain a true purpose on the ship.  It is admirable for this little troll doll of an alien and Ethan Philips really manages to get his needs and wants across very clearly.  While Neelix was really quite annoying early on,  I have to say his character is starting to grow on me now that he has been humbled a bit from his past experiences.

All in all, this is a rather disappointing entry for this season and one that can ultimately be skipped with no loss to the overall narrative. It’s bad.  That’s the nicest thing I can say.

Thanks for reading the Retro TV Review,  I look forward to discussing the rest of the series with you, one episode at a time every Monday, Wednesday and Friday!  Next Review: Favorite Son