Ancient aliens, possession and above all Masks.   Originally airing on February 21,1994, this is Masks.

Data is possessed by an entire ancient culture and the crew of the Enterprise must find a way to stop him before he destroys the entire ship. 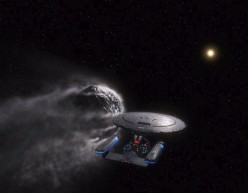 The Enterprise encounters a rogue comet that was not expected to be in the area.  As Data scans the comet an intense sensor echo is reflected back unexpectedly. Meanwhile,  Troi and Crusher prepare for their workout and a strange statue appears in Troi Quarters.  Unaware of where is came from, she leaves it behind to investigate later.

Later that day Data returns to his sculpting class and begins sculpting a strange mask with a symbol that looks exactly like the one on the statue in Troi’s Quarters. Suddenly similar symbols begin showing up all around the ship on screens in an unknown alien language. For some reason Data believes he understands the symbols but unsure as of why.

In an attempt to determine what in the comet they are scanning, the Enterprise fires phasers on the celestial object only to discover an ancient structure underneath the ice. Data seems to understand more than he should and identifies the device as an informational archive.  It is possible that he is somehow in communication with the device but in order to discover why, he requests a level four diagnostic. 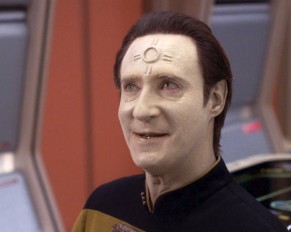 Picard begins to investigate the artifacts that are appearing throughout the ship. He finds certain symbols repeating in the artifacts and begins to wonder what the purpose of these pieces are.  Meanwhile in Engineering Data suddenly asks Geordi what it feels like to lose your mind.  Concerned, LaForge disconnects Data from the computer only to discover he has been infected.  Data turns to LaForge and, in a strange voice says ‘Masaka is Waking!’.

Soon Picard arrives and confronts Data who is now calling himself Ihat.  However when Troi arrives, Ihat immediately takes a knee and refers to her as Masaka. La Forge discovers that the alien archive has taken over Data giving him the equivalent to a multiple personality disorder.   Picard decides to talk with the personalities to find out more.  Picard begins talking to the various people who inhabit Data’s mind.  As he talks with them the archive attaches tractor beam to the Enterprise, drawing it in.  At that same moment Worf discovers that Ten-Forward has been transformed into some sort of temple.  Picard arrives and is informed that the ship is being transformed.  Reluctantly he realizes that they must destroy the archive before it destroys them.

As Worf and Geordi work on a torpedo, they soon discover it is filled with Snakes and the Engineering deck is transformed into something else.  It seems that the archive is transforming the ship into an ancient temple or city of some sort.  Picard determines that they need to contact Masaka in order to stop the transformation from continuing.  Picard returns to Data to discuss the matter with the beings in Data’s head.  Ihat informs Picard that they must build Masaka’s temple and Masaka will come.  Then and only then can they hope to talk with her but she is an evil one that will not be easy to talk with.  Ihat suddenly says that Masaka has found him and an elderly man appears claiming to be Masaka’s father.  He tells Picard that only Korgano can stop Masaka. Picard learns Korgano’s symbol and begins the work on Masaka’s temple. 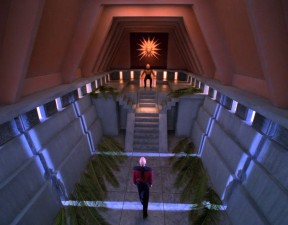 Activating the symbol, the temple is formed and Picard, Troi and Worf begin the wait for Masaka.  Meanwhile Data puts on the mask he made in art class and works his way to the temple. Data arrives and is now clearly possessed by Masaka.  She indicates that she can not hear them, they now know that they need to find Korgano. Locating the symbol in the archive, they activate it and receive  another mask. Picard decides to impersonate Korgano in order to stop Masaka.  It is a risk but one that he knows he must take.  After talking to Masaka, Picard manages to talk her down and the ship is safe.

This is a very interesting episode, one that is really underappreciated in it’s complexity.  This is one of those episodes that really pushes the boundaries of science fiction and does so admirably.

Taking a nod from the classic mythology of the sun and moon, this episode manages to create a villain from a mythical being that comes from an Aztec like space faring race. Thanks to Picard’s love of archaeology and folklore, he is able to discern what they are dealing with and how to resolve the crisis.  This is one of the few where the ship was in real danger but the solution wasn’t just a fight but an understanding of culture instead.

Brent Spiner once again gets a chance to portray multiple characters in a single episode and does so admirably.  He is one of the best actors on the show yet it seems his talents are criminally underused.

I remember hating this episode as a kid as I really didn’t understand what they were trying to accomplish.  It was strange and did not seem to fit into the series at all.  Now I have to say this is one of the most original and interesting entries into the STNG series.

We never see nor hear from the ancient archive again.  I would have loved to have seen a followup on DS9 or Voyager.

Thanks for reading the Retro TV Review,  I look forward to discussing the rest of the series with you, one episode at a time every Monday, Wednesday and Friday!  Next Review: Eye of the Beholder