It’s theft on the high seas…space…errr…high stars…ugh nevermind.  Voyager faces piracy in the episode that was originally broadcast on November 26, 1997.  This is Concerning Flight.

Voyager’s Main Computer is stolen and Janeway has to get it back….with a little help from an unexpected friend. 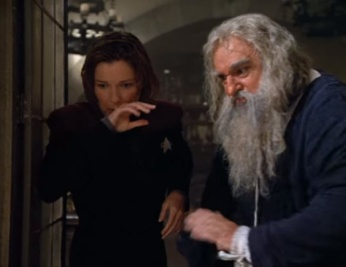 Janeway spends some time with de Vinci on the holodeck as they attempt to use one of the great creator’s inventions.  Her time with the master is interrupted when Voyager comes under attack by unknown aliens.

After the attack it appears that several items have gone missing including the mobile emitter, the main computer processor and sever other important and irreplaceable items. Utilizing the newly built astrometrics lab, they soon track their items down to a planet that is apparently know for it’s interplanetary trade.  Identifying some of their stolen items, Janeway and Tuvok beam to the one area of the planet while Paris and Neelix head to the other.   Upon arrival, Janeway is shocked to run into Leonardo da Vinci who believes that he has arrived in America.

Noticing that he has the Doctor’s mobile emitter on, Janeway asks how it is that he has arrived in America.  Suspecting that he had been kidnapped by Spaniards, he reveals that he is now working for a patron who Janeway is interested in speaking to.  Taking them to his workshop, Janeway and Tuvok learn that this patron awards Leonardo for his inventions by giving him the stolen equipment.

Returning to Voyager with a trader, Neelix and Paris manage to get information from him revealing that it is a man named Tau that is responsible for the thefts.  Soon Janeway and Tuvok find Tau and begin a deal with him to recover their stolen items.

To cut to the chase, they end up having what amounts to a game of cat and mouse and, naturally, Janeway is able to get their items back from Tau.   During the adventure da Vinci realizes that there is more going on and asks Janeway to explain the situation.  She does as much as she can and the two make their escape using one of his inventions.  Eventually, back on the ship, she finds de Vinci preparing for an adventure that will take him to France.

It’s fun.  While my episode description sure doesn’t do it justice this is one of those episodes that you really can’t describe properly without sounding like you are running in circles.  It’s an adventure story that takes the ‘malfunctioning hologram’ trope and turns it upside down.  I really like how they use da Vinci in this one and, frankly, any episode with John Rhys-Davis is a good one in my book.  They guy has such a wonderful demeanor and stage presence that it is hard to look down on anything he is in.  Yes, even the really bad Sliders episodes he was in because man did that series come to a screeching halt the moment he left it.  When he and Kate Mulgrew share the screen it is nothing short of magic on the screen.

The only problem I have with this episode is that the da Vinci character shows that it is practically as sentient as The Doctor only it believes it is da Vinci.  It could be argued that he is just a program responding to the stimuli based on it’s programming but when he begins questioning his own existence something changes in him.  The sad thing is, Janeway pretty much ignores this evolution instead suggesting that his mind is too small to understand the realities he is facing.  So she just tells him is ignorant and keeps him as her personal entertainment.  Shame on you Katheryn, you have new life forming right in front of you and you don’t even recognize it.

Overall this episode does nothing to move the story forward but man it is a blast of an adventure.I do love how we get a fun episode for Janeway.  After all she has been through, this Captain surely needed something a little more light hearted.  While Space Pirates are certainly nothing to laugh at and there was no doubt that Voyager would get it’s property back, this one is just plain fun.   While I would normally recommend skipping over the more filler episodes, this one is such a delight that it would be a shame for you to miss it.  This is one of my favorite filler episodes and well worth watching.

Thanks for reading the Retro TV Review,  I look forward to discussing the rest of the series with you, one episode at a time every Monday, Wednesday and Friday!  Next Review: Mortal Coil