There were key movies in my life that helped to make me who I am today. Movies that I have loved from the moment the opening credit rolled and still love now. This blog series is about those, My guilty pleasures, my favorites, my escapes. Some were very popular, others not so much. Some of these will have some real life take-aways, others are just for fun. Today, we discuss….THE STUFF!

A tasty goop is found bubbling up from the ground and is soon sold as a highly addictive dessert known only as The Stuff. However, when it is consumed it might be consuming you instead. Starring Michael Moriarty, Andrea Marcovicci, Garret Morris, Paul Sorvino and Scott Bloom this film warns of the dangers of not being careful of the things you eat…

As I have mentioned numerous times before, horror was a mainstay in my home. We watched it all, from the classic Universal Monster films to the classic direct to video films from Full Moon Video. So, of course, our viewing habits were filled with the classic 80’s horror schlock that permeated the market. One of my all time favorites is a lesser known film called The Stuff.

What is the Stuff exactly? Well, no one seems to know and that is the key to this film. The Stuff starts off as some strange new food fad that ultimately ends up eating it’s consumers from the inside out. Yeah, I know I tend to avoid spoilers but, if you can’t glean that from a horror film called The Stuff, well, you just aren’t trying.

The Stuff is one of those films that defies description. Billed as a horror film, at it’s core it is really a satire on the rampant consumerism and the dangers of food additives in the US. The Stuff is a strange film, one that jumps from genuine horror moments to pure camp only to bounce around somewhere in between throughout the 90 minutes of it’s entirety. 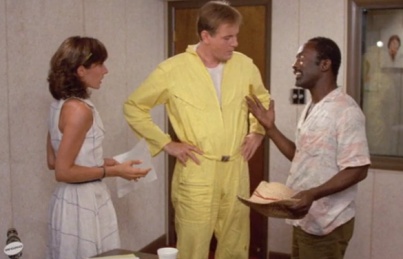 To say it’s a good film is really a matter of taste. To me, I love this film. Is it campy? Absolutely, but in only the best way possible. Does it make any sense at all? Actually, yeah it does. I mean, It’s not a masterpiece by any stretch of the word, but it is an absolute delight to watch as long as you are fully aware that this is not to be taken seriously. From the opening moments where some rando eats a bubbling white goo from the ground without hesitating, to characters with names like ‘Chocolate Chip Charlie’ and ‘Mo’ (because he always wants ‘mo’…yeah…I’m not kidding), this film is filled with the absurd and that is what makes it so very fun. Amazingly, even with the rather silly characters and melodramatic acting, this film actually manages to tell a full and coherent story serving as a warning about the addictive and dangerous chemicals that are added to our foods every day. Now don’t get me wrong, I am not one to demand everything I eat be all natural but, with all the preservatives in foods these days…well you have to wonder.

Much like it’s subject matter, The Stuff is a film that you can’t stop consuming the moment you hit play. It’s absurd, it’s insane and it is an absolute addictive blast of a campy 80’s horror flick. In fact, I would love to see an update to this film in the modern era. Maybe the Stuff is rediscovered and becomes a fad diet… or does The Stuff have an App? Who knows, The Stuff Returns might just be the comeback we have all wanted.

Incredibly, this is a film you can still find and is even available digitally. If you love 80’s horror and love a really well made B-movie, this is the film for you, it’s batshit crazy in every way possible but only in the best ways.

Get The Stuff because ‘enough is never enough’.