We are going to do something a little different with this one.  You see, back on March 4, 1998 UPN aired both of these episodes back to back.  So, with them technically being shown as a feature length, I am just going to combine the reviews so that you get it all at once.   That being said, I will truncate the episode synopsis significantly as this is really a very basic story when you boil it down.   Not saying it’s a bad one, mind you.  Just fairly basic.   So, without further adieu,  this is The Killing Game.

The Hirogen have taken over Voyager and are using the holodeck and the crew to recreate the hunt in an attempt to learn about their prey.  Soon, however, the crew begin to revolt, even though they do not remember who they actually are. 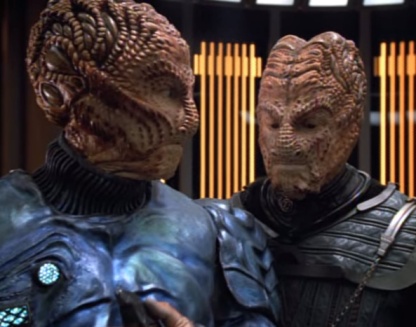 The ship has been taken by the Hirogen who have begun transforming Voyager into one large holodeck. Using the ships database, the aliens have created key events and scenarios such as a Klingon battle and a World War II simulation in order to allow the Hirogen hunters a chance to hunt while learning about their new prey.   Overseen by Alpha Hirogen Karr, the Voyager crew, with their memories altered, are subjected to brutal deaths being saved over and over by an exhausted Doctor.

Things begin to get out of control when the Doctor devises a plan allowing Seven of Nine to regain her memories as she is sent to the World War II simulator.  Soon the war breaks out of the holodeck and into the halls of the ship causing chaos all around.  With holographic Allies, Nazis and even Klingons filling the halls, Harry Kim, who has been forced to expand the holodeck throughout the ship, warns the Hirogen that the program has gotten out of hand. 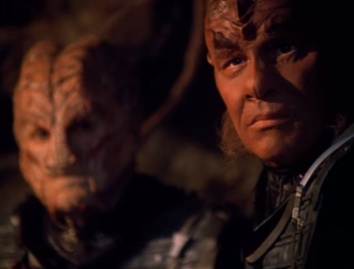 As the simulation continues to get worse, Turanj (one of the Hirogen) suggests simply killing the crew and continuing their hunt but is rejected by Karr who sees potential in the holographic technology. Soon Janeway regains her memories and is confronted by Karr who tells her his plans. He wishes to use the holographic tech as a way to save his people from extinction as he fears that their hunting will ultimately destroy them all. He has found an admiration for Humanity and wishes to unite his people instead of having them scattered throughout the galaxy.  Janeway and Karr agree to a seize fire with Janeway agreeing to give the Hirogen the holographic technology. Turanj refuses to follow the agreement having gotten accustomed to his role as a Nazi soldier.  He is convinced by one of the holographic Nazi’s to continue the battle despite the danger. He soon confronts and kills Karr and begins his hunt for Janeway.    Janeway and her mind altered crew, continue to fight back eventually killing Turanj and overloading the holodeck itself forcing an end to the hostilities.

With everyone restored, Janeway honors her promise to Karr and presents the remaining Hirogen with the technology to create their own holodeck.

Despite the fact that this two hour (2 part) episode could be boiled down into a quick recap, it remains one of my favorite two-part episodes of the series.

I love a good holodeck story, especially when it is not simply a rehash of a ‘holodeck malfunction’ so seeing someone use the holodeck as essentially a live action video game is pretty great.  Not only that, with the Hirogen using the crew-members as their own pawns, gives this a much more dangerous and intense story.  For the first time the entire crew has been fully captured, subjugated with little chance to escape what would be a living hell and, by the end of the first half, we had to wonder how they were going to get out of this mess. 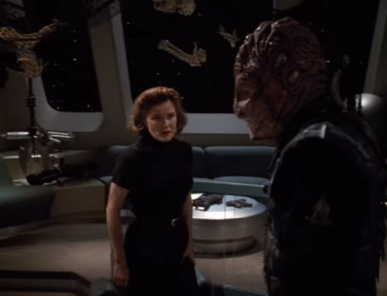 This story takes the Hirogen in a very different direction than what where they appeared to be going.  Having been established as a race of hunters, it seemed that they were being setup as a continual foil for Voyager as it made it’s way through the Delta Quadrant.  Having faced the Kazon, the Borg, the Vidiians and Species 8472, having a new villain was not unexpected and, although the Hirogen were essentially The Predator, they presented a threat that Voyager might not have survived.  So, opening the story with them having taken over Voyager, utilizing it as their own personal video game, was wholly unexpected.  If anything, I would have expected us to find the crew hanging from the ceiling, gutted with their skulls being polished, but it seems this new species wanted something…different.  It seems that Karr is a Hirogen visionary, someone who wishes to take his people in a new direction.  The problem is, while we are meant to sympathize with Karr and his vision, we are lacking some deep context for him and his people.  This, to me is a lost opportunity to really develop the Hirogen into a much more developed species, one that could have been as impactful to Star Trek as the Klingons or The Borg.    Imagine the season consisting of constant attacks by the Hirogen only for one of them to discover Holodeck Technology while being on board.  He takes the information back to his people where Karr gets the idea that they could use this tech as something beneficial. Karr sees that his people are not going to survive as individual hunting parties and decides to change things.  This is when they launch a coordinated attack, something Voyager is not expecting as they have been fending of smaller groups through the season.  Then the events of this episode transpires wrapping the season with a question of who survives and how.  It could have been a great way to build this development for the Hirogen but, alas, we are exposed to yet another rushed and rather two dimensional villain who all but disappears after this episode.  They come back…but not for a while.

One thing I find cool is that, even in the simulation, the senior staff of the ship manage to find themselves as members of the resistance or as part of the allied invasion.  While it is never clear if this was on purpose or just happenstance in the simulation, this shows just how close the members of the crew are with one another. Even when they have their memories wiped they find a way to connect and work to thwart those who have taken over.   I do find it interesting, however, that even though it is implied that the entire crew is participating in the forced hunting simulations, we never really see any of the alien members of the crew save Tuvok, Neelix and B’Elanna.   Where are the Bolians, the Vulcans, and the rest?  I would think we would see some among them but they are no where to be seen.  Could there be other simulations running outside of the Klingon and WW2 programs…maybe…but it seems unlikely.  We will just say we didn’t see them or they were placed in custody as the implants didn’t work…I guess.

Overall, I love this episode despite itself. It is a fun story that works and seeing the crew in new roles is always a blast.   I especially love how both Janeway and Neelix get into some Klingon fun themselves and this will not be the last time we see Kate Mulgrew as a Klingon.  While the story is solid, I really think it could have been so much better.  While the Hirogen are obviously inspired by the Predator, they could have been turned into both a tremendous villain and an unlikely ally over time.  Voyager has it’s flaws and one of the biggest glaring flaws is that it seems to hate follow-through on any single major event.  There are repercussions when it serves the narrative but they are far and few between.

Thanks for reading the Retro TV Review,  I look forward to discussing the rest of the series with you, one episode at a time every Monday, Wednesday and Friday!  Next Review: Vis a Vis