With only four episodes remaining, Picard gets a great story with the return of an old foe, the revelation of a possible child and more on the episode that originally aired on May 2, 1994. This is Bloodlines.

DaiMon Bok returns for revenge against Picard, only this time the Ferengi is threatening the life of a son Picard never knew he had.

The Enterprise encounters a probe that hails Captain Picard by name.  When he answers, the probe transmits a hologram of DaiMon Bok who claims that he is going to kill Picard’s son, just like Picard killed Bok’s. Dumbfounded, Picard has no clue who Bok is talking about so he figures Bok is insane and goes on his way…

Picard of course, leaps into action and attempts to do some research into Jason Vigo, the man Bok claims to be Picard’s son, and his mother Miranda.  Picard fills Riker in and admits that there is a possibility that he has a son but Miranda never told him she was pregnant.  If it is his son, Miranda kept it quiet or, it is entirely possible that DaiMon Bok is mistaken.  Either way, Jason Vigo is in danger and Picard has to try to rescue him. 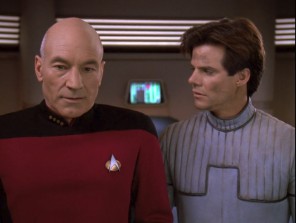 They immediately begin searching in the last place Miranda and Jason were last seen.  They locate Jason underground and beam him aboard the Enterprise.  Picard reveals to the young man that it is possible that Picard is Jason’s father. Jason acknowledges that his mother never told him who his mother was but all he knows is that his father was in Starfleet.   Jason gives in to a DNA test and Crusher confirms that Jason is in fact, Picard’s son.

Picard begins to try to connect to his newfound child.  Jason seems to immediately resent his father and acts like being in Picard’s presence is an inconvenience.  Reluctantly Jason agrees to stay aboard until they hunt down Bok but clearly isn’t happy about it.  After contacting the Ferengi homeworld, Picard learns that Bok was stripped of his rank years prior but was set free not long ago.  They learn the Ferengi’s last location and begin pursuit.

That evening, Picard has a visit from Bok himself but, when he calls for security, Bok has vanished.  After working with LaForge and Worf to determine how Bok got on-board, they discover that the Ferengi could not have been aboard the ship.  Soon Picard is informed that Jason has a storied past of criminal activity and the Captain decides to discuss this with his son. In Ten Forward, Picard and Jason discuss the danger at hand.  Just before Picard arrives, Jason shows signs of some illness but hides it quickly.  When Picard attempts to get acquainted with his son, the Captain is quickly rebuffed much to his dismay.

The Enterprise arrives in the Xindi-Cabo system where they encounter another probe.  Upon meeting with it, the probe explodes and leaves a message reading ‘my revenge is at hand’.  Frustrated, Picard continues the search for Bok but only finds himself becoming more and more frustrated at the situation. As Picard contemplates the situation, Bok appears in the Captain’s office.   Bok demands that Picard pay the Ferengi back with Jason’s life.  Bok tells Picard that he demands to be paid and nothing will stop him.  Suddenly, in another part of the ship, Jason begins to convulse on the floor.

Beverly checks Jason out in sickbay and discovers that Jason has a disease called Forester-Trent Syndrome.  The syndrome is hereditary but Picard doesn’t have it and, since Jason’s mother has passed away, it is assumed that he inherited it from her. Soon, Data and LaForge discover that Bok has been transporting himself aboard via subspace.  Now that they know how he is getting on board, they can track him the next time he appears.

Picard soon finds Jason on the holodeck rock-climbing and decides to join him.  Picard tries once again to bond with his estranged son.  Jason tells Picard of Miranda’s death and Picard asks Jason how he can be a father to him.  Picard never had a chance to bond with his own father and doesn’t want to miss the chance to get to know his own.  Jason attempts to push Picard away and the Captain informs Jason that, no matter what, he will be there for him. 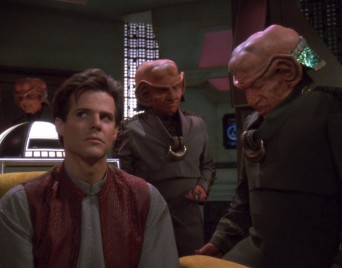 Soon Crusher calls Picard to sickbay where she tells Picard something about Jason.   Just as she tells him the details, Bok begins an attempt to beam Jason from the ship.   LaForge manages to stop the transporter beam and, just as Picard arrives, Jason is beamed away.  Soon, another probe appears and Bok tells Picard that his revenge is at hand.  He holds a knife to Jason and Picard decides to beam aboard Bok’s ship with Data using the same method Bok boarded the Enterprise.  Upon arriving Picard challenges Bok and informs the Ferengi that Jason Vigo is in not in fact his son.  Bok has re-sequenced Jason’s DNA and lied to his crew about a ransom.  Bok’s crew, knowing there is no profit in the deal, turn on Bok and let Picard and Jason go free.   Jason leaves the ship although Picard offers him a chance to stay.  Picard gives Jason a parting gift and the two go their separate ways. 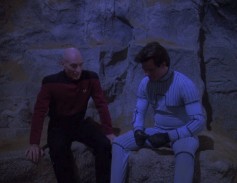 This is a great episode that really gives Picard a chance to show that he regrets not having a family, a theme that will return to haunt him later in his life.  Picard made a decision years before to give himself over to his career and, even though he is happy with the life he has, in the back of his mind he always wondered, ‘what if?’

When it becomes clear that there is a chance he actually has an son, unlike Worf, Picard embraces the chance to be a Father. While he knows he can never make up for the 23 year absence in Jason’s life, he feels that he can, in fact, offer the young man something, even if it is just a familiar connection.   For Picard, this is his chance to make up for something he had all but given up on and so, when it becomes known that Jason is in fact not his son, it is rather heartbreaking for our intrepid Captain.  For a fleeting moment, Jean Luc Picard had a legacy beyond himself and then it was gone.  In the final moments of the episode, you really feel the sense of loss in Picard, something that only Patrick Stewart and his incredible acting can pull off.

Speaking of Fathers and Sons, the episode itself was Written by Nicholas Sagan, son of the famous astronomer Carl Sagan.

There is a moment when Troi visits Jason and finds him to be a bit of a flirt.  For a moment I had to wonder if Jason wasn’t in fact Riker’s son.

We learn more about Picard’s backstory and another of his past romances.

The episode itself serves as a sequel to the Season One episode, The Battle.  Bok, once again, gets his comeuppance.

Thanks for reading the Retro TV Review,  I look forward to discussing the rest of the series with you, one episode at a time every Monday, Wednesday and Friday!  Next Review: Emergence