As the series comes to a close, we get one more holodeck adventure, but this time the stakes are higher than ever before.    Originally airing on May 9,1994, this is Emergence.

After strange events plague the ship, Picard and crew discover that the Enterprise herself may be having a child and this could pose a threat to the very crew that must keep it alive. 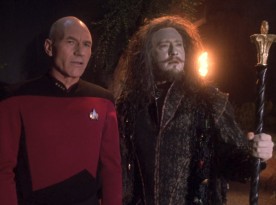 The episode opens with more of Data rehearsing The Tempest with Captain Picard,  things get strange though when a train runs through the holodeck simulation nearly hitting both Picard and Data.  Immediately they begin to investigate only to find that the train that appeared in their program came from one of Doctor Crushers programs about the Murder on the Orient Express.  Picard has all of the holodecks shut down until they can determine the issue at hand.

The Enterprise begins a survey mission to find new locations for Federation colonies when the ship suddenly goes into warp with no warning.  Just as Geordi is about to cut power on the engine, the Enterprise drops out of Warp and continues along the way.   Geordi discovers that it appears the ship saved the crew with it’s Warp jump, and no one is sure how or why the ship reacted without instruction.

As Geordi investigates the cause of the sudden, but serendipitous, Warp Jump, he discovers a node in the system that was not originally part of the ship.  It appears that the ship itself is building nodes that are connected to every part of the Enterprise.  Upon further investigation, they find that all of the mysterious nodes intersect in Holodeck 3.  Upon entering the Holodeck, they find themselves on the Orient Express with a strange eclectic group of travelers. Soon the conductor arrives and begins to ask everyone for their tickets.  When Data and Riker begin to investigate the node, they are confronted by the conductor, demanding their tickets.  Just as things get stranger, the Engineer arrives insisting that the Conductor leave the away team alone.  The Engineer is then shot by a mob boss over a brick (confusing but just follow me).  It soon becomes clear that the Orient Express and its passengers are in control of the Enterprise.  Knowing that they are in danger, Data, Riker and Worf leave the holodeck.

Data surmises that the Enterprise is forming an intelligence and that these nodes are the beginning of a neural net.  Armed with this knowledge, the team returns to the holodeck to find out what exactly is going on.  This time Troi accompanies the group and they find themselves arriving in Keystone city, when the conductor finds that they do not have tickets, they are asked to depart at Keystone City.   As it would have it, the mob boss has a brick he is protecting the brick that he killed the engineer over.  Troi tracks the Mob Boss down and finds him placing the brick into a building, claiming that he is ‘laying the foundation’.  At that exact moment, Geordi finds that one of the cargo bays have depressurized and a strange node is beginning to grow there.

Data begins to depolarize the power grid and, at that very same moment the ship begins to lose structural integrity.   Just as Data stops, the ship reacts and stops the damage. They soon begin to realize that the ship is building something but what that something is is still a mystery.  Returning to the train for some answers, Worf, Data and Troi work on the train to help keep the ship running.   As the train is heading toward Vertiform City, the ship stops near a a dwarf star and begins to pull back Vertion Particles.  There seems to be an issue however as the star doesn’t have enough Vertion Particles so the node the ship is building seems to be dying. Geordi discovers that whatever the ship is building has organic components and may be creating a life form.  The ship redirects to find another white dwarf star but the crew will not survive the trip and so the ship must be diverted somehow.

Geordi finds a way to create Vertion particles in a nebula and stops the ship from it’s journey to the white dwarf.   The Enterprise gets it’s vertion particles and has it’s baby. The crew is saved and the ship is back to normal.

I have no idea what they were trying to do in this episode.  With everything this crew has seen and done, for them to just let the Enterprise itself take over and create a life form and then let said life-form ‘go about it’s merry way’ just seems insane.   I mean, when Picard files his report with Starfleet, the first thing they will ask is if the life-form is secure.  When he can’t answer that, surely there will be a formal investigation.   Unlike Data, the Enterprise is indeed Federation property so, by all rights, that new life-form is as well.  Picard would have likely been brought up on charges for not protecting the assets of the Federation.

Okay, let’s be honest, I do know what they were trying to do here, the whole ‘new life and new civilizations’ part of the speech, showing us that not all life is the same but haven’t we already done that story a thousand times over? From what I understand, this was also meant to be one last Holodeck episode and, if that was the actual intent, it failed catastrophically.  To be honest, this is probably the second worst episode of the season, just behind the Crusher Rapey Ghost episode.

Well, Only two episodes left, is the ship headed for disaster or was this just a simple misstep?  Yeah, we know that it does get better but still, the first time we saw this one, we though they had just given up since the series was coming to a close.

We never see nor hear from Enterprise Junior again, we never even learn what it really was.  My best guess is that it and Gomtuu are hanging out with the giant floaty heads in the center of the galaxy.

There is one scene in the episode that I will call out as one that I have loved since I was a kid.  It’s the one where Data is holding back a car with his bare hands.   That image is classic.

Thanks for reading the Retro TV Review,  I look forward to discussing the rest of the series with you, one episode at a time every Monday, Wednesday and Friday!  Next Review: Preemptive Strike