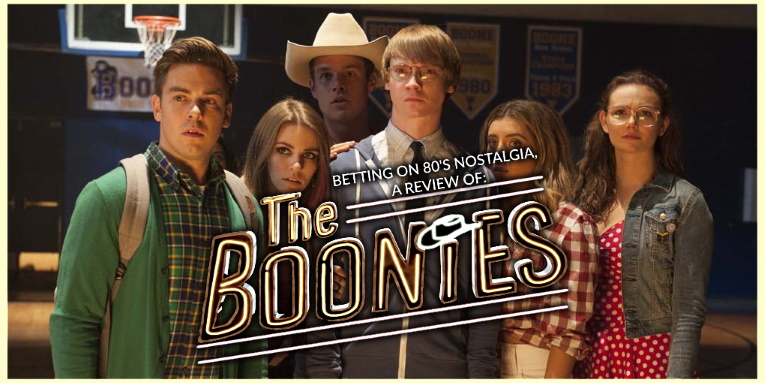 The adage that ‘everything old is new again’ is more poignant than ever before as filmmakers rush to remake, reboot or just bring back classic and beloved films, hoping to cash in on the emotional attachment to the classics so many of us have.  The problem with most of these nostalgia grabs is that they fail to recapture much, if any, of what made the original films so special.  Enter The Boonies.  The Boonies is a love letter written by a teenager to all of the 80’s coming of age films that somehow manages to be a perfectly modern version of the classic teen movie from yesteryear.

A group of former friends receive a  message from a deceased friend who sends them on one last adventure in search of money they all thought had been lost years before. Starring Andi Matichak (Halloween), Calum Worthy (The Act), Emilio Garcia-Sanchez (The Society), Cody Ko, Lauren Elisabeth and Amy-Marie Gaertner, this is a fun, and silly, nostalgia ride for the modern age.

From the beginning it is abundantly obvious that you are not meant to take this film seriously.  Embracing every teen movie cliche, we dive in head first with a group of  common archetypes including the popular girl, the cute geeky girl, the stupid jock (or in this case hick), the Goth girl, the ‘good guy’ and, of course, the super nerd.  Unsurprisingly all of these characters share a past and, through that past they are forced to reacquaint with one another after having drifted apart once they all hit puberty.

Incredibly, the cast is pretty fantastic for a cliched teen film.  Also falling under the trope of ‘adults playing teens’, this cast manages to perfectly capture the tone and feel of their predecessors while not ever completely falling into the deep pit of camp.  Sure, they do manage to create a rather melodramatic tone but this honestly gives the film a charm that just seems to work. 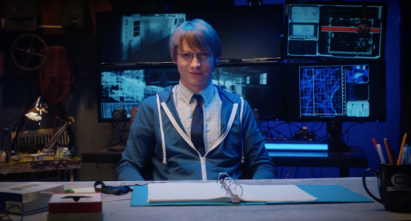 Leading the story is Calum Worthy as Doug the recently murdered teen.  Channeling a blend of Corey Feldman and River Phoenix he narrates the adventure leading his former friends using a series of posthumous videos while also filling the audience in with important plot points.  Calum is solid in his role and, having heard that he is expected to play Speedball in the upcoming New Warriors TV series, I am excited to see what he can do.

Playing Doug’s sadistic posthumous game are his treasure hunting friends played by Lauren Elizabeth (as Stephanie the ‘queen bitch’), Cody Ko (as Teddy the best friend of Doug), Andi Matichak (as Holly the ‘hot nerd girl’), Kyle Jones (playing Chuck the ‘dumb jock/hick) and Amymarie Gaertner (as Elektra the ‘goth girl’.) For an ensemble cast, the chemistry between them all is solid. Not once did I feel that they had not been friends at some time in their lives especially with how easily they insult one another yet manage to pull together in the heat of the moment.  While much of this could be attributed by the witty script by writer director Brad T Gottfred, it takes skilled quality delivery to make the script work and this group has the timing and skills down to a tee. While most of the cast are rather new to the screen in their careers, you would never know it by their performances.  They are all solid and, frankly each have a strong career ahead of them if they keep this level of performances up.

Researching this release, I found that The Boonies was initially intended as a tv series.  While the production is clearly on a budget, Gottfred manages to take this series and turn it into a rather well edited and paced feature film.  Had I not discovered it’s serial roots I would never have known that it was not intended to be a feature film in the first place.

Distilling all of the most treasured moments from the films of our past, including it’s namesake The Goonies, Adventure in Babysitting, Can’t By Me Love and many others, The Boonies somehow manages to feel like a film right out of time yet somehow modern as well. It is silly, it is completely unbelievable but yet, somehow, it is a very fun and rather enjoyable movie.

I look forward to more from Writer/Director Brad T Gottfred and from the cast in this his latest film.  While this is not a blockbuster in any sense of the word, if you like campy teen films that manage to hit that twinge of 80’s nostalgia, this is one for you.  It’s fun, irreverent, silly, sometimes slightly offensive but honestly a good time.  Turn your brain off, sit back and enjoy one last adventure with The Boonies.