I don’t really remember how I discovered this band.  It may have been on a compilation disk or even on download.com back when they offered music, but regardless, they came across my desk one day and instantly became a band I really liked.

Being a fan of the 80’s and 90’s music scene, this quartet feel like something right out of those years and evoke a near sense of time travel when you listen to this album.  They almost feel like a band you knew back in the day, but missed somehow. 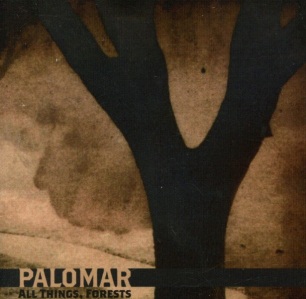 Like I said earlier, I don’t know how I came across this one but the instant I heard it, I knew it was for me.

There is something familiar about each and every track on this album that a child of the 80’s and 90’s will immediately recognize but wont be able to put their finger on.  It is there between the lyrics, under the notes and hovering above the drum beats.  It may be the unassuming vocals or the amazing music by the rest of the band, I don’t know, but it is there. Rachel, Dake, Brockett and Christina are amazing and could have easily headlined with The Breeders, Sleater-Kinney and many others without seeming out of place in the least.

I think the thing that really makes me love this band is that they don’t try to be something they are not.  Too many times bands try to copy someone or be ‘in the vein of’ another band, instantly stifling their individuality as a band, Palomar has none of this, they are simply Palomar and that is good.

The album itself is an impactful and emotional journey touching on relationships, life, quiet moments and even death.  It is one of the most well produced indie albums I have run across with the album sounding like it could have been produced by Steve Albini himself.  It is a sonic dream wrapped in the pleasant yet powerful vocals provided by Brockett covered in the shear 90’s alt rock.

On a side note, the band themselves are actually really cool folk.  When I found out about them and tracked down this album, I sent them an email thanking them for their music and just basically telling them how much I dug the band. (I am strange like that, I like people to know they make cool things). Not expecting a response, I forgot about the email and moved on.   Over a year later I received an email.  For grins and giggles, here is the correspondence below, because it’s rare for a band to be this cool and respond even after a year and a half.

Hi Kheas,
I realize that this message is about a year and a half old…are you still alive?? But I didn’t see it until now! We’ve been working on a new album so I haven’t been looking at the palomar email much. But still, you’d think I would have seen it in the past year and a half. This has to be the longest reply time of any non-famous band, ever.
Anyway, thank you very much for your kind words. To be honest we just finished our new album and we’re trying to figure out what to do with it, label or no label, how to put it out, etc, and things have changed so much since we put out the last one we’re kind of confused and discouraged, so it’s good timing to get such a nice email.
Anyway, it’ll be out in a month or two in some format, and I’ll keep you posted on what we do with it and where to get it–or feel free to check in again if you don’t hear, and I promise to respond within a calendar year. No really, within a normal amount of time.
And–find us on facebook, here!
http://www.facebook.com/#!/pages/Palomar/8498544879
Thanks again and take care.

Rachel and the other Palomars, Christina, Brockett, and Dale

Wow, where do I start?  I heard “Our Haunt” while surfing the web one day, don’t ask me where I can’t remember, and I instantly fell in love with your sound.  I tried finding your album in the local record store but it was only available for special order.  I really couldn’t wait so i jumped on my Zune marketplace and found, much to my pleasure, your work.  After convincing my wife that I would die if I didn’t buy “All things, Forest”, she finally gave in and now I have been listening to this album non-stop.
Basically, thanks for such an amazing album.  It’s such a refreshing sound that digs back into my past.  It’s almost as if I were 15 again (sometime ago I assure you) and music was good just because it was.  I’m not saying there are not ANY good bands that exist today, there are just not that many that care enough to put something worth while out.  I’m glad to see that there are still bands that are just good, not because they want to be like everyone else, but because they seem to enjoy what they do.
I wish you success, what ever that means to you. If that means a major label one day, or just an underground following, then so be it.  I’m just glad I found your music.  That makes me happy.  Every chance I get, I let someone else hear this amazing work and if they like it, great!  If they don’t, oh well, their loss.

So, in a nut shell, I guess I could have avoided the lengthy story and just said this, Thank You.    Thank You for allowing your music to be heard.  I don’t think artists hear that enough, so I just wanted to let you know that you all are appreciated.   Thank You.

The Air Between us channels a touch of The Postal Service without all of the electronica.  It is a gorgeous song that will take you away.

The opening track, Bury Me Closer is a great one opening with a cool bit of studio chatter making the album feel like you just stepped in on a jam session only to receive the concert of the ages.

Surprise Us.  Man, just listen to it.  It is pretty astonishing.

This is a hard one to find but you can grab a copy here for around $15.  It is totally worth it and honestly, I think you will find it spinning quite often.  And, you can listen here, on Spotify.    Be sure to give their earlier works a try as well, just know, All Things, Forest sets the bar high.