The penultimate episode of Star Trek the Next Generation in which we see the return of an old friend.   Originally airing on May 16, 1994, this is Preemptive Strike.

Ensign Ro returns to help with the emerging Maquis threat only to find herself sympathetic to their cause. 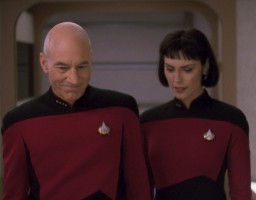 Ensign Ro returns to the Enterprise but this time as a Lieutenant and returning for duty.  Facing a reception in Ten Forward, Captain Picard rescues his new Lieutenant from the engagement only to be interrupted by a Cardassian ship who is broadcasting a distress call.  Upon investigating, they discover that the Cardassian ship is being attacked by Federation ships. It is soon discovered that the attacking ships belong to the splinter group known as The Maquis.   When the Enterprise arrives, they manage to chase off the attackers and are able to rescue the Cardassians.

Picard meets with Gul Evek in sick bay where they discuss the Maquis threat.  After their discussion, Picard leaves to meet with Admiral Nechayev where he learns that the Federation plans to infiltrate the Maquis and they want Lt. Ro to be the spy.  Ro reluctantly agrees to the mission and immediately begins her mission.  Donning a civilian disguise, Ro finds herself in a seedy bar where Worf and Data follow behind ‘searching’ for a bajoran woman who is wanted for the death of a Cardassian.   She is soon confronted by a Maquis operative and is taken to their cell.  There, she offers to join their cause.

While touring the Maqui stronghold, Ro begins to see in their leader, Macias, a father figure.  He is a kindly old man who has experienced the worst from the Cardassians have had to offer.  After checking her background, the Maquis welcome her into the fold and allow her to join their cause.   Planning a strike against the Cardassians, Ro volunteers to steal medical supplies from the Enterprise.  Asking for a ship, she and fellow Maquis member, Kalita, set up a trap and wait for the Enterprise to arrive.

Getting a distress call from a Science Vessel in the Topin System, the Enterprise enters the system where they find themselves without sensors.  Using their weakness, Ro sends a signal using the fake distress signal.   Picard receives her message and allows her to steal the medical supplies and makes it look as if they try to stop them at the last minute.  Ro escapes and proves to the Maquis that she is indeed one of them.

Soon, Ro meets with Picard where he informs her of the plan to capture the Maquis leaders.  The Federation is going to set up a target too big for the Maquis to ignore.  She returns with information that the Cardassians are planning to build a biogenic weapon that could spell the end of the Maquis.   Jumping into action, Macias and the others take Ro at her word and begin to pull the Maquis cells together.  However, as she gets to know the cell members better, she begins to realize that they are not entirely in the wrong.  Just as things are looking up, a group of Cardassians attack the Maquis stronghold inadvertently killing Macias.

Ro continues her mission and meets with Picard at a small bar.  There they exchange information about the Maquis threat.  Ro asks Picard to cancel the mission and admits to Picard that she is having doubts concerning the Maquis.  She is unsure of where she stands and wants to end the mission before she makes a decision she will regret.  Picard talks her into carrying out her orders. 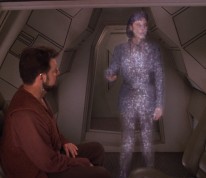 Riker joins Ro in her mission under the disguise of a Bajoran Maquis sympathist.  While the Maquis begin their attack, Ro reveals her treachery and exposes the Enterprises presence in the area of the attack.  The Maquis withdrawals and Ro leaves with them.  Riker reports back to Picard, where the Captain doesn’t seem to be taking the betrayal very well.

Directed by Stewart himself, this is a great send off for one of the best secondary characters of the later half of the Series, Ro Laren.   Ro was never one to conform to Star Fleet and, just when it looked like she was getting her career together, she is thrust into a situation that causes her to question her path in life.   Picard took this betrayal pretty hard in the end as he had really believed that she was coming around as an officer aboard the Enterprise. In a way though, he should be proud of her that she finally found what she was looking for.

I wonder if any of this will be brought back around in the new Picard series.  There is a lot of mystery surrounding that show and any of these loose ties could easily be picked up and revisited.  If Ro managed to survive all of the events that took place during DS9, which is doubtful but possible, it would be fascinating to explore how Picard would deal with her some twenty plus years later..

As the penultimate episode of STNG, this one does a wonderful job setting up things to come in the Star Trek franchise, from establishing more with the Maquis to even setting up some groundwork for Star Trek Voyager by showing the variety of people involved in the rebel cels. 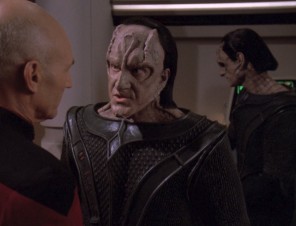 While she wasn’t in this episode much, we do see Kalita again though in an episode of DS9 that also includes another certain Riker.

We get a brief but important cameo from Gul Evek,  we haven’t seen the last of him.

Only one more to go…

Thanks for reading the Retro TV Review,  I look forward to discussing the rest of the series with you, one episode at a time every Monday, Wednesday and Friday!  Next Review: Series Finale: All Good Things…