The Doctor makes a choice with B’Elanna’s life in the balance.  Originally broadcast on December 2, 1998 this is Nothing Human.

When B’Elanna’s life is threatened after an alien attaches itself to her, The Doctor must consult with the program of a possible war criminal in order to save her life. 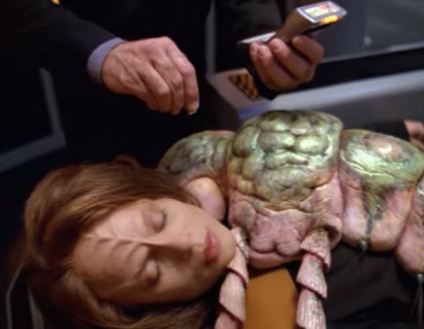 After a rather boring presentation from the Doctor about his recent away mission, the ship is buffeted by a strange energy wave.  After it passes they detect a signal that leads them to a damaged alien ship with a single life-sign aboard.  Beaming the non-humanoid being to sickbay it is clear that this strange bug-like creature is badly wounded.  As the Doctor begins to attempt treatment, Torres arrives to assist in finding a way to communicate with the creature as it’s ship is run through chemical interface.  No sooner does she arrive than the creature leaps onto her attaching itself to her neck and body.

With the alien firmly attached, a now unconscious Torres is scanned by the Doctor.  He determines that the alien has interfaced with her lungs and heart keeping alive through her body functions, however this is damaging her kidneys.  Despite Paris’ demands to remove the alien, the Doctor informs them that if they were to remove the alien now, it would kill both the patient and the bug like creature. 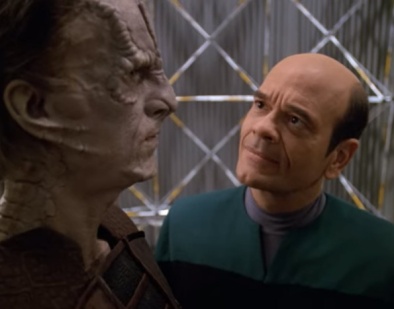 The Doctor confides in Janeway that he needs a exobiologist to assist as his programming is limited in this subject matter. Kim agrees to help build a holographic consultant using the information on the leading exobiologist, one Crell Moset.  Only, when activated, Kim realizes that Torres may have an issue with him as he is a Cardassian.

The Doctor begins working with Moset when things get even more difficult. Seven, working in engineering as the temporary Chief Engineer, attempts to access the aliens ship database but ultimately causes it’s destruction, preventing any information that may be of use to be destroyed. In sick bay, Torres wakes only to be upset at the fact that a Cardassian is working on her but is assured by Paris that Moset may be their only hope. 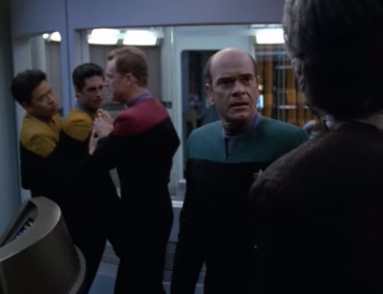 Things get back underway but just when things are looking up, the hologram of Moset begins to destabilize.  The situation gets even worse when Ensign Tabor, a Bajoran on board, arrives to help Kim with the hologram malfunction only to see the person who killed his grandfather, brother and many others during the Occupation of Bajor.

Attacking Moset and accusing him of being a murderer, Paris and Kim hold him back as the Doctor attempts to explain that this is only a hologram.  Clearly not helping the matter, Moset is sent back to the holodeck in order to allow Tabor time to explain.  Soon Tabor informs them that the real Moset was a butcher who experimented on Bajoran people during the Occupation and, although he was responsible for finding cures to viruses and ailments, he did so by infecting innocent people.  Tabor begs the Doctor to delete Moset and all of his research from the system as using it validates the horrendous actions that were committed.

Leaning about who Moset is, Torres makes it clear that she wants nothing to do with him in assisting to save her life.  However she soon goes into shock and may require the assistance of Moset or die.  As the Doctor attempts to stabilize Torres, Kim and Seven confirm the truth about Moset and inform the senior staff.  The Doctor is torn, knowing that this butcher may be the only person who can save Torres but would be using knowledge gained from evil.

Janeway calls a staff meeting where she learns that Ensign Tabor has resigned his commission and other Maquis and Bajoran crew-members are planning to do the same.  She listens to the arguments about using the program to save Torres and, in the end, agrees that, while Moset’s methods were unforgivable, they have no choice but to use it under the extreme circumstances they are in.  If they had access to other options they would use them but being lost in the Delta quadrant prevents this and the Doctor is instructed to finish the procedure with Moset.

Soon another similar alien shop arrives and, Janeway attempts to communicate with the aliens but to no avail.  In sickbay Moset begins his procedure which results in nothing but screams from the alien parasite indicating that all that is being done is torture.  The Doctor stops Moset and finds a way to get the same results without causing pain or death on the alien.   Just then, the new alien ship begins to attack.

As the attack commences, The Doctor is soon able to remove the alien without killing it or Torres.  He has the alien beamed over to the attacking ship and it soon leaves with a brief screech in response.

With B’Elanna safe and the alien away, Janeway visits the Chief Engineer who is quite upset at the decision to use Moset to save her.  Janeway explains that there was no option to lose their Chief Engineer and that it was Janeway’s decision to proceed.  She informs Torres that she did what she had to to protect her ship and crew and that Torres will have to learn to accept this fact.   Janeway then informs the Doctor that it is up to him to decide what to do with Moset and his data.

The Doctor reports to the holographic lab and, activating Moset, he tells the Cardassian that he has decided to delete his program.  The Doctor cannot, in good conscience, continue to use Moset’s research regardless of the knowledge that will be lost.   After a brief confrontation, the Doctor deletes the program and leaves.

This is a great episode…or would be if it had taken place on Deep Space Nine. 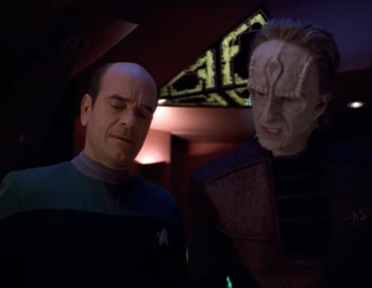 Seriously this episode makes no sense at all as a Voyager episode. The Doctor literally has access to the entire ships database.  This has been established time and again.  Not only that but the EMH program was built to be able to use this information to perform any and all medical procedures as needed. Sure, they try to establish that the Doctor can’t simply access everything but seriously, we’ve even seen the Doctor put someones consciousness back in their body so I call shenanigans!  Seriously it makes no sense AT ALL.

Not only that but the revelation that Crell Marset was a war criminal should have not been much of a surprise.  Seriously,  Voyager has all of this data in their ships systems, including the shipping requisition logs from Bajor for some reason (seriously how much data does this ship hold?!), but in no time did anyone with this data put two and two together even though it was clearly well known that he was doing experiments on Bajorans.  Even the freakin convenient Bajoran Ensign we have never seen before knows who he is for goodness sake!  This could have worked if it were a non-holographic Doctor who was not part of the ships systems or if the Doctor had been taken off line and Paris had to save B’Elanna instead.  Heck, it would have been a terrific DS9 episode where Doctor Bashir has to face his own limitations only to realize that he is taking the advice of a known war criminal.  Imagine Kira’s response to this revelation and how it would have played out!?

Instead we got a wonderfully written episode that tackles the classic ‘means vs ends’ conundrum but in a series it simply doesn’t work for.  That’s what makes this episode so frustrating.  It’s a terrific story for the entirely wrong series.  Heck, this would have made a WONDERFUL Star  Trek Enterprise story as well by swapping out a few species to fit the timeline.  But no, it’s the most out of place and plot hole filled story this season so far.

All this aside, character wise this episode is terrific. The Doctor is forced to confront the conundrum of means vs ends when it comes to using knowledge gained from horrible methods while B’Elanna is forced to reckon with her mortality as she refuses to be treated by a Cardassian.  The real surprise in this episode is the hard decision made by Janeway when it comes to choosing between the survival of her crew and their personal wishes.  Janeway has faced some difficult challenges regarding the prime directive and their separation from Star Fleet time and again, but this is really the first time she has had to choose to ignore the cultural and personal wishes of her own crew-members.  B’Elanna specifically refused treatment if Moset was used to save her yet, despite this request, as well as the issues others in the crew had against Crell Moset, she allowed him to be used.  Sure, his program was deleted in the end but not by her choice, but at the Doctor’s.  Was this to separate herself from this hard choice or to allow the Doctor to experience growth?  Who knows?

Sadly, despite the excellent story and the wonderful character development, this episode simply doesn’t work.  It’s broken simply because it is a misplaced adventure on the wrong series.

Thanks for reading the Retro TV Review,  I look forward to discussing the rest of the series with you, one episode at a time every Monday, Wednesday and Friday!  Next Review: Thirty Days