Two pairs of new friends face different challenges in the episode that originally aired on May 2, 1993.  This is The Storyteller.

Miles O’Brien finds himself forced to act as the Storyteller for a small Bajoran Village. Jake and Nog find themselves assisting a new friend as she is forced to settle a dispute between two Bajoran settlements.

Story A: O’Brien the Storyteller

Much to O’Brien’s dismay, he is forced to travel with Julian Bashir to the surface of Bajor in order to assist in preventing the extinction of the people in a small village.

On their way to the village, O’Brien finds himself forced into small talk with Doctor Bashir who is painfully aware of O’Briens dislike for him.  Trying to get O’Brien to open up, Bashir asks Miles to refer to the Doctor as Julian.  Upon arrival they find that the crisis is that the Sirah is ill and in danger of dying.   Thinking that this is a plague, Julian and O’Brien are shocked to learn that the only one affected is the old man who may be the only one who can save the village from an unknown threat. 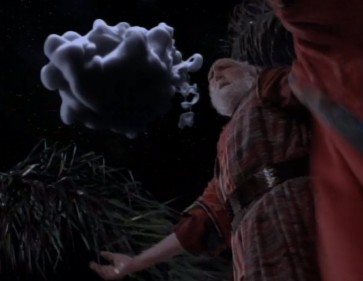 When Bashir indicates that there is nothing he can do to save the Sirah much to the dismay of the village Leader. That night, against Bashir’s advice, the Sirag accompanies his assistant to face a creature known as the Dal’Rok which appears in the form of a storm-like cloud.   In order to dismiss the being, the Sirah begins a story about the Dal’Rok and the villages strength against the being.  As he tells his story he collapses causing the Dal’Rok to attack, harming many of the villagers in the process. The Sirah begs O’Brien to perform as his successor telling him the words to say to face the Dal’Rok and save the village.   His words appear to work and the cloud-like creature is banished for the time being. Unfortunately, just as the Dal’Rok is defeated, the Sirah dies.  Much to O’Brien’s dismay, the village name him the new Sirah. 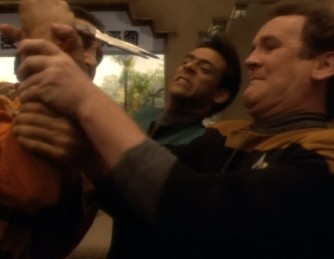 O’Brien finds himself in shock of his new position and Julian finds it humorous.  O’Brien is worried that he will not be able to fulfill his new duty as Sirah, indicating to Faren, the village leader, that he can not remain to be the Sirah. With no choice, he decides he needs to find out what the Dal’Rok is and how to defeat it permanently.  As he investigates, O’Brien finds it impossible to work with all of the attention.  He is soon confronted by the Sirah’s old assistant who is hellbent on revenge.  Bashir arrives in the nick of time and the two of them manage to get the truth out of the young apprentice.

Hovath, the apprentice, indicates that he is bitter that the Sirah had no faith in him and dismissed his apprentice due to a mishap.   It appears that the Dal’Rok’s visit is created by both the Sirah and the fears of the villagers.  O’brien tries to hand off the mantle of Sirah to Hovath only for the notion to be rejected by the village leader.   That night, the Dal’Rok returns and O’brien proves he can not control the beast.  In the last moments, Hovath rushes in and saves them all from destruction by the conjured beast.

O’Brien and Bashir leave the village, happy to be free of their brief responsibility as village saviors.

The Bajoran Government requests that Ben Sisko mediate a dispute between two warring settlements on Bajor.  Much to his surprise, the leader of one of the villages is a 15 year old girl who is rather, abrupt.

After storming out of the negotiations,  the 15 year old Varis Sul finds herself in the presence of Jake Sisko and Nog after they see her on the promenade.  Visiting her in her quarters, the duo take Varis to view the Wormhole.   Nog finds himself infatuated by the young Bajoran woman.

Ben Sisko and Varis exchange words about the issue at hand.  It seems that during the Cardassian occupation a river was diverted causing a border between two villages to change according to an old treaty.  The young woman is not willing to give up the newly acquired land even though it was acquired through an unnatural act by the Cardassian people. She doesn’t want to give up the land and is determined to stand her ground.

Soon she finds solace in her newfound friends, Nog and Jake.  She shares that her parents were killed by the Cardassians and she has no person to give her the guidance she craves. Before long they all become friends and Nog indicates that there is an opportunity for Varis to negotiate with her rival village’s leader.  In order to celebrate, Nog steals Odo’s bucket and plays a trick on Jake pouring oatmeal on his friend pretending it is Odo.  The Constable, of course, catches them in the act at the same moment Ben Sisko appears much to the dismay of Jake.

Varis apologizes to Ben Sisko for their actions and indicates that she wants to learn more about the Commander based on Jake’s trust of his father.  She asks the Commander for help in the situation at hand, indicating that she is out of her depth.   She indicates that there is an opportunity for both villages to share the land for the greater good of them both and is now willing to negotiate with Commander Sisko’s help.

Two friendships bloom in this episode, one between Sisko and Bashir and one between Jake and Nog.  These friendships will grow throughout the next seven years into very deep and lasting relationships.

Overall the episode is a much lighter tone than we have seen for much of the season.  The structure is more like that of a TNG episode with multiple story arcs going on at once so that the viewer gets a chance to get to know some of the characters that really haven’t been given the spotlight.

For Jake and Nog, this is them being kids.  As the son of a teacher in a small town, I can sympathize for Jake Sisko. There is nothing he can do that his father will not hear about almost immediately.  This makes for his time on the station to be a little strained sometimes as he has little chance to ‘be a kid’ and get into mischief.  As a kid I was unable to skip school and, if I said or did anything ‘wrong’ in school it was pretty much a guarantee that I would have to face even more punishment when I got home.  For Jake, he not only has the unfortunate circumstance to be the Station Commander’s son but, because of this, his actions reflect on his father in a personal manner.  Whether he likes it or not, people will judge the effectiveness of Commander Sisko by just how difficult or unruly his son is.   Luckily, Jake has a lot of respect for Benjamin Sisko.

On the other side, We find the unlikely pairing of O’Brien and Bashir on a mission to Bajor.  Not unlike Felix and Oscar of the Odd Couple, Miles and Julian are very much an incompatible pair.  They have little in common and, for all intents and purposes, Miles can not stand Julian.   It is through this adventure that they begin to develop a kinship that will eventually become one of the greatest friendships in Star Trek history.   By the end of the series, you will not be able to name greater best friends than this pair.

As an episode of it’s own it is a rather unimportant throw-away plot but for character development, it is invaluable.

We never see nor hear from the Sirah or his village again.  I guess this is the only Bajoran Village with a mythical cloud beast.

We never hear from nor see Varis again, despite her parting kiss she gave Nog.

We also get to see Odo smile again.

Thanks for reading the Retro TV Review,  I look forward to discussing the rest of the series with you, one episode at a time every Monday, Wednesday and Friday!  Next Review: Progress