Sibling Rivalry, sports rivalry, friendly competition.  It all boils down to trying to be the best. What if you had a device that, each time you win, your luck increases?  Sounds great huh?  Then you could beat any rival!  But what if you start to lose?   Originally airing on January 2, 1994.  This is Rivals.

Quark gets some unwanted competition from a new bar while O’Brien and Bashir face off for a game of Racquetball.

The episode opens with the El-Aurian Martus Mazur listening to a woman discuss her financial plans.  It soon becomes obvious that he is a con man and Odo steps in to stop the man from taking advantage of the lady he is talking with.  Meanwhile, O’Brien is shocked to find Bashir has taken over the Chief’s private Racquetball court causing him much dismay.  To simplify matters, lets split this into the two stories.

Story A: It all comes down to luck. 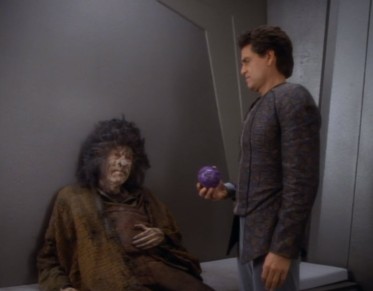 Martus finds himself in a holding cell with an older snoring companion.  Soon the older man awakes and tells Martus about a gambling device that ruined him.  The man explains that he has gambled away every endeavor of his life thanks to the device he has.  After explaining his plight, the man plays one last time and is excited to win the game just as he dies.  Of course, Martus takes the dead man’s device.  Martus is soon freed much to Odo’s dismay and he soon finds himself in Quark’s Bar.

There, Quark takes notice of Martus’ new gambling device where the Ferengi quickly loses and finds himself jealous of this new game.  Quark offers Martus some money for the device but is denied the purchase. Soon Martus encounters Roana, a woman who has just lost her husband and is closing up shop. They soon strike up a deal to work together and soon open a bar much to Quarks dismay.

Quark soon takes a complaint to Sisko where the Ferengi is informed that there is nothing that the Federation can or will do about the situation.  Soon Martus begins to take all of Quarks customers including hiring Rom out from under him.  As Martus finds success he re-encounters the woman he had been talking to when he first arrived.  She begs him to help her support a mining operation and he agrees when she informs him that there would be a tidy profit. 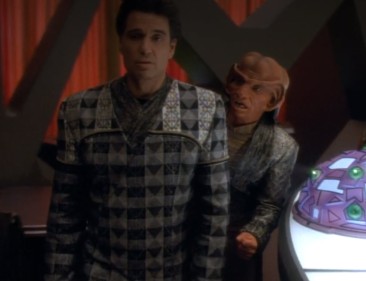 Roana is pleased with the situation between her and Martus.  He soon proposes to her offering a chance to ‘formalize’ the arrangement.   He explains that he has replicated the device he retrieved on a larger scale and soon things begin to get interesting.  Before long people begin to have either really good luck or really bad luck in recent hours with Dax finding things she was missing and Kira discovering that her computer self destructed.  However, it seems everyone in Martus’ bar is having great luck much to the El-Aurian’s dismay, it gets worse when Quark finds a way to combat the new bar.  Martus’ luck gets worse when his fiance Roana leaves him and takes the bar for herself.  He soon gets an idea and uses his only profits to support the mining operation proposed by Alsia.

Story B: A simple game of Racquetball:

After facing off against Bashir, O’Brien returns home upset and excited.  The Chief is furious at his loss and Keiko reminds her husband that he is not as young as he once was.  O’Brien is determined that no matter what he will not be undone by the Doctor.

Meanwhile Bashir has a whole other story he is telling to Dax.  Apparently, the young doctor was impressed with the Chief’s determination but was soon exhausted by it.  He even made arrangements to have his assistant call him away when it became clear that O’Brien was not going to let up. Bashir is concerned that O’Brien is going to give himself a heart attack trying to compete with him but he knows it’s not the end. Soon Bashir and O’Brien go against one another again where Bashir fails on purpose, this only infuriates the Chief even more. 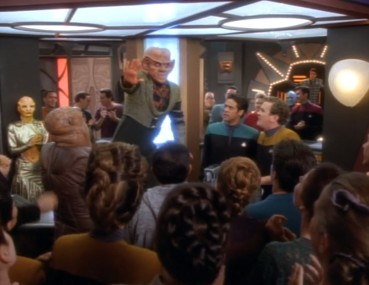 The Chief finds himself facing the Doctor again only to lose miserably.  It seems that O’Brien has had a run of bad luck after stepping on the ball.  O’Brien brings his troubles to Quark’s Bar where the Ferengi gets an idea of using the rivalry for his benefit.  Soon he promotes a competition between Miles ‘the Mechanic’ O’Brien and Julian ‘The Doctor’ Bashir toting it as The Grudge-match of the Galaxy.  To rope them in, the Ferengi Bartender tells everyone that the Starfleet officers vowed to donate half the profits to Bajoran Orphans.   The Ferengi is cunning and they can not say no. The rivalry between the two bars and between the two Federation officers has gotten deeper.

Just before the match gets underway, Quark tries to rig the match by getting Bashir drunk.  When this fails, he tries to get Bashir to throw the match so that the Monks get their blankets for the Orphans.  Bashir ins’t buying his attempts and kicks the Ferengi out.

It all comes together when Dax, Sisko and Kira notice that the neutrinos are out of wack around the station, in fact they are spinning in the opposite direction than they should.  As the Match begins, it is clear that suddenly Bashir is having a run of bad luck and O’Brien can not miss a shot, in fact, he is making shots that would normally be impossible.   At the same time, Martus finds himself alone after Rom quits and his deal with Alsia is not looking promising.  After O’Brien demonstrates the situation, Dax realizes that something is causing luck to change.  They soon find themselves in Martus’ bar where he reveals that he replicated to original device which is now causing everyone’s luck to change.  Dax and Sisko destroy the devices and soon Martus finds himself back with his old luck, in fact worse than before.   Not only is he back in jail but discovers Alsia was a con-artist herself and all of his profits have been lost.  Quark, of course takes advantage of the situation and loans Martus the money to leave the station.

This is a fun one. Not all episodes of Star Trek need to be serious or even thought provoking and this is one of those that is just plain fun.

Quark gets a great showcase in this episode with a true Rival in Martus.  We really get to see how Quark handles confrontation and competition only to eventually come out on top despite the threat of losing his business.  This Ferengi is cunning however and, like any good Ferengi, he finds a way to get back at his rival and in doing so, manages to secure his spot on DS9 for that much longer. 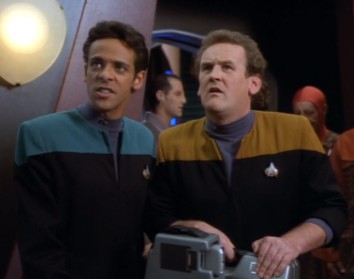 While it showcases Quark, this episode also manages to begin firmly establishing the friendship between O’Brien and Bashir.  Sure, they seem to be Rivals at the moment, as the episode title suggests, but trust me, this is only the beginning of something more to come.

I particularly like the character of Martus and the use of the El-Aurians.  It only makes sense that a race of listeners would have a few who would want to take advantage of their rather unique abilities. El-Aurians, like the more famous Guinan from STNG, are a race who pick up things in very subtle ways,  they are a mysterious people who seem to have a deep insight into the universe itself.  While we never see nor hear from Martus again, it was cool to see yet another of these people even though we would not know this until the events of Star Trek Generations.

There is a slight mention from Odo about the El-Aurian refugees.  This is a direct reference to the events in Star Trek Generations, which, at the time, had not been released yet.

As Per The Deep Space Nine Companion,  it was intended that Martus be Guinan’s son but Woopie Goldberg was not available so that plot line was dropped.  I would have loved to have had Guinan show up and chastise her son for causing trouble.  That would have been amazing!

47th rule: Never trust a man wearing a better suit than your own.

109th rule: Dignity and an empty sack is worth the sack.

Thanks for reading the Retro TV Review,  I look forward to discussing the rest of the series with you, one episode at a time every Monday, Wednesday and Friday!  Next Review: The Alternate