Today we discuss a largely forgotten scifi cult classic by a master of horror, Mimic.

When a new ‘superbug’ is created to control an epidemic spread by cockroaches, the new creature that has been unleashed proves more dangerous than the disease it once saved humanity from.

Director Guillermo Del Toro is now somewhat of a household name.  With several incredible films behind him, television series and even video games, there is hardly a person who has not heard his name.  In a way, Del Toro has become the modern equivalent to Alfred Hitchcock but back in 1997, he was still a relatively unknown filmmaker to American audiences.

The film that introduced me to Del Toro was not this film, in fact it was the one just before it known as Cronos.  Cronos itself is a fascinating Mexican horror film involving eternal life and a rather interesting take on the vampire myth.  While I enjoyed Cronos immensely it was this film, Mimic, that really made me appreciate the talent that this director had and solidified me as a fan of his work for life.

The story of Mimic is a classic one that has been done time and again. It is the story of introducing an invasive species to take care of a threat only to have the new species become a larger threat.  While this concept has been done dozens of times over, Guillermo manages to take the concept and freshen it up in a way that makes it both frightening and fascinating.  As with most films of this ilk, the overarching lesson is one of not messing with nature and playing god.  Like that of Jurassic Park or Westworld, the film asks the question, even if scientists can do something…should they?  The beauty is, this film doesn’t focus on that but shows us what happens after it is far too late. 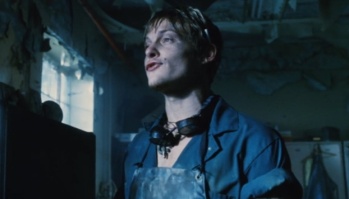 The cast in this is pretty much a who’s who of modern actors including Mira Sorvino, Charles S Dutton, F Murray Abraham, Jeremy Northam and even Josh Brolin.  Interestingly this is also the feature film debut of one Norman Reedus who has certainly become well known these days. The thing that makes this film work is not just the incredible horror elements but the interpersonal relationships developed throughout the film.  Covering everything from starting a family to a father protecting a child after a pandemic every relationship feels fully fleshed out and real. Not once do you get the sense that these story elements are just tacked on for filler. That is really the magic of Del Toro’s story telling, the man knows drama and knows how to make even the most unimaginable real and can bring drama to the darkest of stories.  His films are never one’s that exist only for a cheap scare, they are one’s that force you to consider the possibilities that there horrors are real.

Additionally, from a technical perspective, this film is nearly perfect. From the incredible camera angles, wonderfully accomplished creature effects, story pacing to even the incredible cast, Miramax spared no expense to make Del Toro’s first American Feature Film a stunning achievement. Heck, the creature effects will make you want to keep a can of Raid on hand from here on out just in case.  While Del Toro himself was not overly pleased with the final product, he was able to make some adjustments via the later released Director’s Cut that helps to improve both some of the visuals and story elements of the film.

Finally, no scifi/ horror film is complete without a great score and long time composer Marco Beltrami provides just this.  Having worked with Del Toro on several other films after this one, Beltrami has gone on to compose the scores for films like 3:10 to Yuma, Snowpiercer and even the video game Fortnite.  To say he has left his mark on entertainment is an understatement and even Mimic, one of his earlier works, shows just how good this composer is going to become.  The beauty of Beltrami’s work is that it never once overshadows the film or action in any way.  Too many times a soundtrack overwhelms the dialog or action on the screen, not so here.  Beltrami’s score manages to only enhance each and every scene with subtle musical clues and flourishes in all the right spots.

Overall, while Del Toro was not satisfied with the final product, I am still astonished by how great the final product still is.  This is an excellent horror film that really holds up since it’s release in 1997. If you haven’t seen it yet, stop what you are doing and check it out now.  Trust me.  You’ll thank me later.

You can pick up the theatrical version here but I highly recommend the Directors cut.  You can get the directors cut via digital streaming from places like VUDU.  Give it a go, I think you’ll dig it. Be careful though, there is another film called The Mimic but it is certainly not the same film.  Mimic spawned two sequels but honestly, you can skip them.  This one is the best.