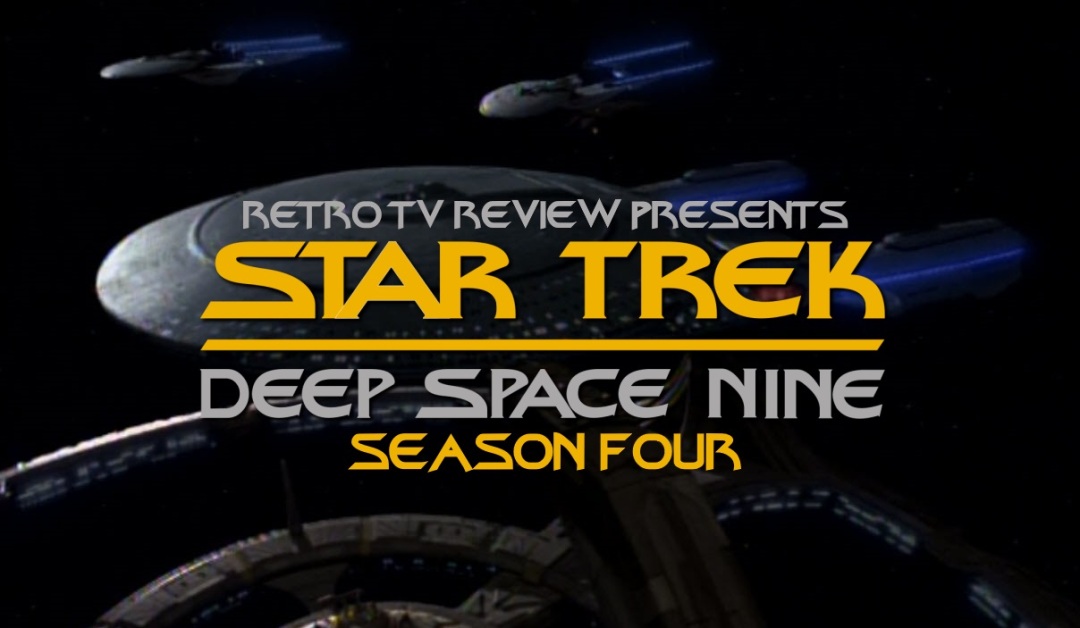 Worf gets the spotlight as he seeks for the The Sword of Kahless in the episode that originally aired on November 20,1995.

Kor, Jadzia and Worf go on a quest to find a lost artifact that they believe could reunite the Klingon Empire.

After Kor tells a tale of his adventures with Kang and Koloth in Quark’s bar, Jadzia introduces Worf to the Dahar Master.  Immediately Kor refers to Worf as a traider and a pariah but tells the Commander that this makes him a friend of Kor’s. Soon Kor invites Worf to join him in his search for the Sword of Kahless as the old Klingon believe he knows where this ancient artifact lies. Worf agrees to join Kor after seeing an ancient shroud in Kor’s possession.That evening, however, Kor is attacked in his quarters by a Lethean who reads his mind.

Jadzia finds her old Klingon friend laying on the floor of his quarters.  Jadzia informs the Klingon that the shroud shows signs of being old enough to have held the sword of Kahless.  Asking Sisko for permission to venture into the Gamma Quadrant to search for the sword, it seems that The Hur’q (an ancient people refereed to by Klingons as Outsiders) stole the sword centuries before and a recent Vulcan archeoligical team discovered evidence of the Hur’q on a planet beyond the wormhole. Sisko permits them the use of a runabout and the Jadzia, Worf and Kor head out on their quest on the USS Rio Grande.

Arriving at the planet, they locate a chamber in the Hur’q ruins that was part of an old museum only to find that the chamber has been looted.  Undeterred, Worf is determined to track down those that stole the artifacts.  Investigating, Worf soon discovers a hidden room containing the very sword they are after.  They have found Kahless’ Bat’leth.

Things become complicated when Toral, son of Duras, appears and informs the trio that he plans to take the sword from them in order to take over the Empire. Kor gives Toral the Bat’leth but not as the young Klingon was expecting and the three make their escape.  With Toral and crew on their trail, Worf and team head to the surface to get back to the Runabout.    During their escape, Kor is shocked to learn that Worf spared Toral’s life years prior and accuses Worf of being a fool.  Kor informs Jadzia that it may have been a mistake to bring Worf along, that Kor no longer trusts him.

That evening, Worf is disgusted when Kor begins to exaggerate their exploits together.  Worf finds the old man to be dishonorable and is upset when Kor uses the Bat’leth as an eating utensil.  The two Klingons begin to debate how the sword must be used.  It soon becomes clear that Kor feels that he may be the only one worthy enough to wield the Sword of Kahless and lead the Empire to glory.   Worf is rightly concerned.

Later, Kor heads off to get more food and Jadzia begins to tend to Worf’s wounds.  As she treats him, Worf fills the Trill in on his background and how he never felt he ever fully belonged with his own people.  He tells Jadzia that, upon touching the sword, he has come to realize that he was destined to take up the sword and lead his people to greatness.  Unknown to Worf and Jadzia, Kor heard the conversation and is now concerned that they will have to fight for Kahless’ Bat’leth. 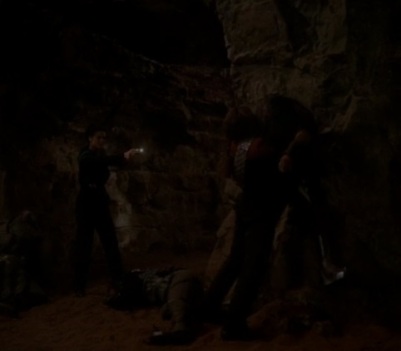 Continuing through the caves, it soon becomes clear that the sword has become an item of contention bringing out the worst in both of the Klingons.  Determined to keep them from killing each other, Jadzia demands that she take the Bat’leth as neither of them can be trusted with it.

That evening, with everyone tired and needing rest, the two Klingons challenge each other as to which of the two of them will sleep first and be vulnerable to the other.  Jadzia soon falls asleep only to be awakened by the two men as they argue about the sword.  Soon, the two warriors clash swords just as they are attacked by Duras and his men.  Kor charges forward with the Sword of Kahess and before long Worf and Jadzia join the fight.  Taking them all down, Worf is attacked by Kor over possession of the Sword forcing Jadzia to stun them both.

Finding their way back to the shuttle, Worf and Kor realize that the sword is too powerful of an artifact to be brought back to their people.  It turned the two of them against one another and, should they return it to their people, it would likely do the same to the Empire.   Knowing this, they beam the sword into space knowing that it will be found when it is destined to be.

This is our very first Worf-centric episode in DS9 and a great way to fully integrate him into the series.  I have always loved the Klingon lore episodes from Star Trek the Next Generation and, getting a chance to continue that lore on DS9 was a thrill for me when Worf joined the crew.  So, when it came time for Worf to get the spotlight, I can’t think of a better story than the return of Kor for a loose sequel to the Episode Blood Oath.

Outside of exploring more of Klingon culture and history, the thing that really makes this episode special is the subtext of the deeper meanings of religious iconography.  I remember as a kid I was introduced by a Catholic friend to a box in his church that he claimed actually contained ancient items including a part of the Ark of the Covenant, a piece of wood from the original crucifix, some of Christs actual flesh and other items of antiquity.   Of course, I was skeptical of such a thing, I mean, 2000 year old flesh would probably be well past dust at this point, but I heard him out.  He explained that this was part of his beliefs and that every major church had a box that contained these things so that they had the essence of God in their place of worship. I asked if we could see them to which he was mortified, of course we couldn’t, that would be sacrilegious.   I later learned that he didn’t quite have it right, there was no flesh in the box (I would later learn was called a Eucharist) but this was something he had faith in and I found that devout faith in something he would never see or prove to actually be in existence to be a fascinating thing.

The same can be said about the Sword of Kahless in the Klingon culture. There is no evidence that this was, in fact, the actual Sword of Kahless but, both Kor and Worf immediately saw it as the very thing they were after.  I mean, This is one of the holiest items for the Klingon People, seeing that Kahless is practically Klingon Jesus, so why wouldn’t they.  Imagine if someone were to publicly claim to have actually found the Holy Grail or the Ark of the Covenant (someone besides Indiana Jones that is).  If proven authentic or even believed to be, those relics could and would change history and the world in profound ways. To some the Cup of the Carpenter would just be a mug and the Ark a box but to the devout, these things would mean power and faith in the physical form, something that the devout had only believed in would actually exist.  This very event is what happened to Kor and Worf.  To them, they had found their holiest of holies and immediately their baser instinct began to take hold.   As seen in a the similar story of Treasure of the Sierra Madre, when people find something that is worth a considerable sum or that will provide them with power, they tend to begin to distrust one another despite their best intentions.  While their hearts started in the right place, the soon found that the mere touch of this artifact made them feel more powerful than they could imagine, causing them to distrust everyone around them.  Their faith was tested and, sadly, they were proven unworthy. (or as the knight in Last Crusade would say, They Chose Poorly)

Overall this is a wonderful episode about faith and power plus, it marks the beginning of an interesting relationship between Worf and Jadzia.

Thanks for reading the Retro TV Review,  I look forward to discussing the rest of the series with you, one episode at a time every Monday, Wednesday and Friday!  Next Review: Our Man Bashir