Unrequited love, a deep friendship and regret all come into play in the episode that originally aired on January 29, 1996.  This is Crossfire.

First Minister Shakaar returns to the station and Kira finds herself falling in love with the former resistance leader.  Meanwhile, Odo finds himself dealing with his emotions for the smitten Kira. 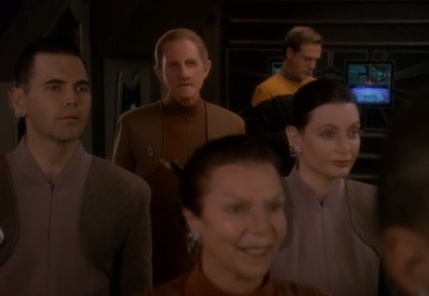 Kira visits Odo to go over the recent criminal activity on the station as they prepare for the arrival of First Minister Shakaar.  Upon Shakaar’s arrival for his speech, Odo reports that he believes someone is planning to assassinate the First Minister.

Odo informs Shakaar’s adjutant and the stations senior staff that he believes the new Cardassian terrorist The True Way to be planning an assassination attempt of the First Minister.  Knowing that they need help due to Eddington’s absence, Sisko assigns Worf to fill in as head of Starfleet Security and work with Odo to protect Shakaar.

As Worf and Odo begin preparations, they become frustrated when Shakaar alters his plans and decides to visit the stations Temple, compromising his safety.  As Shakaar heads through the Promenade, Odo finds himself concerned by every movement of the crowd forming around the First Minister but manages to get him to the Temple safely.  Later, at a reception for Shakaar, Odo finds himself jealous of Shakaar’s attention toward Kira and her response in kind. 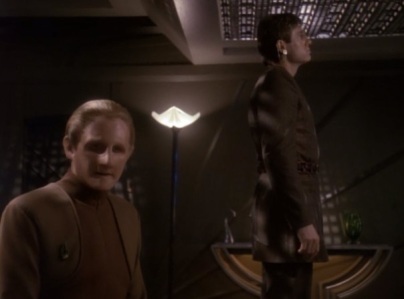 The next morning Shakaar and Odo discuss the negotiations that the First Minister is there to run.  It is clear that Shakaar is having issues convincing the Federation to expedite Bajor’s admittance into the Federation and Shakaar finds comfort in Odo’s advice.  Soon Shakaar asks Odo about Kira’s feelings toward the First Minister, hoping that Odo would have some insight.  Uncomfortable, Odo tries to dissuade Shakaar from telling Kira about his feelings knowing that, if Shakaar tell her, Odo could lose his chance with Kira forever.

The Next morning Odo is upset when Kira is late for their Tuesday morning Criminal Activity report.  He is further upset when  she cuts their meeting short to escort Shakaar through the station.  It soon becomes clear to Odo that the two are falling in love and, when they head back only to find themselves in danger when the turbolift is attacked.  Odo, using his abilities saves the group but realizes that it is his fault for not paying attention to the situation at hand.

Odo is embarrassed that he did not verify Worf’s security code, inadvertently risking the lives of Kira, Shakaar and Odo.  Sisko orders the Constable to find whoever is responsible for the attack.  Odo and Worf begin investigating the attack and the Klingon begins to get upset at the shapeshifters obvious distraction.  Odo decides to visit Kira and is dissapointed to find that Shakaar is in her quarters and remains there for the night.  When Kira and Shakaar finally emerge, Odo is saddened to learn that the two have become romantically involved.  Although he is happy for his friend, Odo finds himself heartbroken over the losing the chance to tell her how he feels. 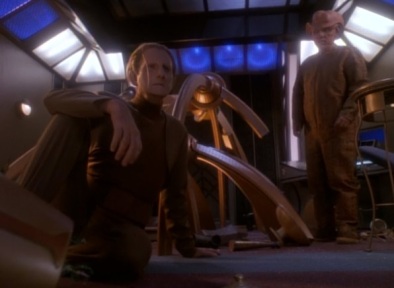 Soon Odo returns to his office only to find that Worf has found the assassin and apprehended him.  Worf commends the Constable at how well trained his deputies were in the apprehension.   Odo returns to his room upset and begins destroying his room. Quark, who happens to share the room below Odo, visits the shapeshifter and is shocked to find Odo’s quarters in disarray.   Quark tells Odo that he needs the constable to get back to normal as it is disrupting not only Odo’s job but also Quark’s profits.

The next morning, Odo visits Kira where he informs the Major that he will no longer be having their Tuesday Morning meetings.  Although he claims that it is only a matter of using his time more efficiently, she can tell that there has been something lost between the two of them but what that something is is left unsaid.

In the end, Odo visits Quark where he finds himself back to business as usual, minus the hope for love.

There are not many episodes in this series that do not follow the A/B story formula. Most of the time we are presented with multiple story-lines that, many times, converge to complete the story being told.  Every so often a story is presented solely focusing on one or more of the characters allowing for some key development in those that are the primary subject.  That is the case in this one with Odo and, to a lesser degree, Kira.

Since the beginning of the series, it has been pretty clear that Odo has had a deeper feeling for Kira than he wanted to admit.  Not understanding the emotional spectrum of a Solid, Odo tended to push those feelings away until he was forced to confront those feelings when another changeling cause Odo to believe that Kira’s life was in danger.  Since that moment, Odo had become brutally aware of his desire for the Bajoran Major but was afraid that he would be rejected due to his nature as a changeling.

Unfortunately, it is only when his feelings are threatened by another that the Changeling decides to act, but, unlike his quick thinking in his day-job, he reacts to slowly, leaving him alone in the end.   While it seems that Odo has resigned himself to a fate of solitude at the end, returning to the more Stoic Odo we have come to know, this episode reveals that the shapeshifter has far more depth than we have ever suspected and his feelings for Kira are far from resolved,

Additionally, this episode continues the story that began with the death of Vedek Bareil and Kira’s morning for this loss.  It is only when she finds herself with an old friend that she discovers that she is able to move past her loss. While she is thrilled with the prospect of having Shakaar in her life, there is a hint at the end that she is saddened Odo has not told her his true feelings.  You get the hint that maybe, she was waiting for him as well.

Finally, this episode really solidifies the unlikely friendship between Odo and Quark.  Although their relationship is based on a mutual dislike for one another, it quickly becomes clear that they really only want what is best for each other.  Quark knows that, should anything happen to Odo, he would have to deal with an all new security chief and that is the last thing he wants.  Odo, on the other hand, recognizes that, even though the Ferengi Bartender is a criminal, he is one of the few he can depend on to never really cross the line and one that will always come through if there is truly something insidious going on.  Theirs is a friendship of mutual respect and is one that is fascinating to watch develop.

Thanks for reading the Retro TV Review,  I look forward to discussing the rest of the series with you, one episode at a time every Monday, Wednesday and Friday!  Next Review: Return To Grace