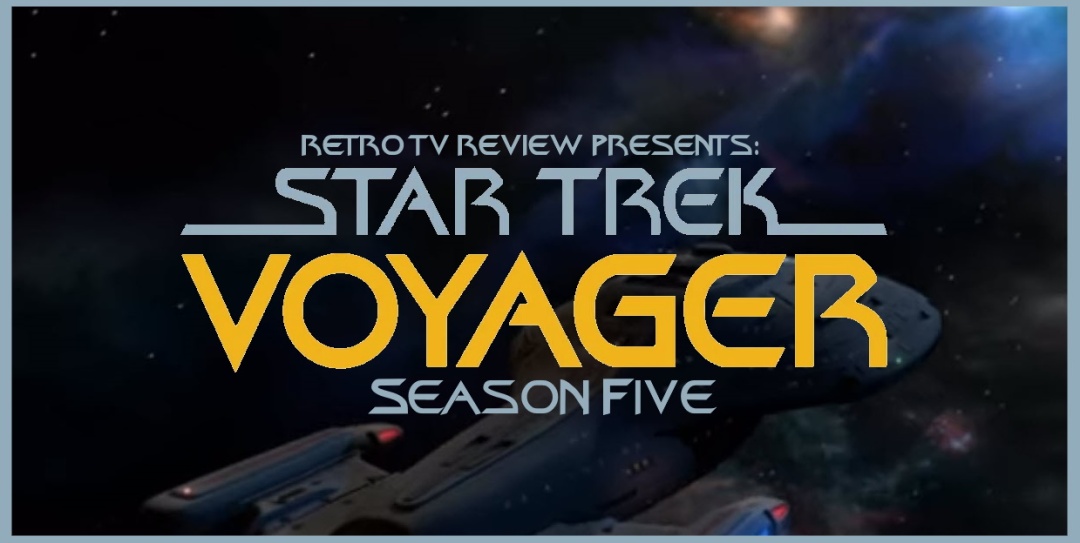 The Doctor and Seven have a child….wait what?!  Originally broadcast on October 21,1998, this is Drone.

After a fateful mission, The Doctor’s Mobile Emitter is infected by nanoprobes and a new life is born.

The Doctor, Seven, Tom and B’Elanna all go on a mission together but things turn from bad to worse when their shuttle runs into a proto-nebula.  Beaming them off, Voyager is able to rescue the group but the Doctor’s Mobile Emitter (ME) is damaged causing him much distress. B’Elanna begins an overnight diagnostic and, after she leaves….it begins to sprout tendrils…BORG TENDRILS!!!

The next morning, The Doctor bothers B’Elanna about the state of his ME and Seven awakes prematurely from her regeneration sensing that there are Borg nearby.  Taking her info to the Bridge, Harry and Chakotay scan the area but find nothing. Meanwhile, Ensign Mulchaey is probed by the Borgified ME.

Suddenly things get strange when Harry detects warp conduits being rerouted to the science lab and the ship begins to pick up a Borg signature on the ship.  Rushing to the science lab they find an unconscious Ensign Mulchaey and an infant Borg in a maturation chamber.

Learning about the new life form aboard Voyager, Janeway instructs the crew to allow the child to love but under close watch.  The team soon learn that the infant drone is made of a combination of the 29th century MT, Seven’s nanoprobes and Mulchaey’s DNA making it a highly advanced future drone with some significant abilities.  Janeway asks that Seven attempt to teach this new person how to be an individual acknowledging that she wants to give it a chance to live.

Now a fully mature drone, it awakes in an alcove asking for it’s designation.  Seven links with the new drone and quickly discovers that it is hungry for knowledge, nearly hurting her in the process.  It stops, however, when she tells him that his actions are causing pain.  In order to prevent such an event again, Seven begins to use data nodes to teach the Drone new information.  The Drone soon begins inquiring about it’s Borg Heritage but Seven tries to change the subject.  Visiting the Doctor, the Drone soon learns how it came to be and is assured that it will be accepted as a member of the crew.

After helping several crew-members with difficult problems, the Drone, now calling himself One,  secretly contacts the Borg in hopes to learn about his heritage, unaware of the danger they pose to Voyager.

Seven is awakened prematurely to an alert that the Borg have been detected nearby.  One informs them that he wants to learn about the Borg, Janeway agrees and Seven shows One the truth of his heritage.  One soon understands that, if the Borg assimilate him, they will become far too powerful to ever defeat again, and while One is intrigued in learning about his culture, he begins to show signs of anxiety as well.

A Borg Sphere arrives and attacks, locking on to Voyager while contacting both Seven and One.  Seven warns One to ignore the voices.  One soon informs the crew that the only way for them to escape is to let the Borg capture him so he can destroy them from within.  Seven is frightened that he will be assimilated but, before she can stop him, he transports himself to the Borg Sphere. 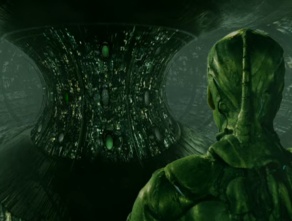 The Borg inform One that he will be added to their collective, but One rejects them indicating that it is he that will add them.  Knowing that there is no way to prevent Voyager form being destroyed in the process, One links with the Borg and sends the sphere into the proto-nebula causing it’s destruction.  Voyager soon finds the body of One in the wreckage of the sphere and they beam him back to the ship.

In sickbay, a dying One refuses treatment despite Seven’s plea’s.  He tells her that by remaining aboard and alive, he paints a target on Voyager that the Borg will never be able to resist.  He must allow himself to die to save Voyager and the crew. Seven stands by unable to stop him from dying.  Afterward, Seven deactivates One’s alcove in the cargo bay and tries to find solace in his absence.

The primary mission of any Star-fleet vessel is to seek out new life and new civilizations so, when an episode does just that, I can’t help but be excited about it.  Sure, Voyager encounters new aliens all of the time but it isn’t very often that they encounter a truly new life form, or even something that is unlike anything previously seen.  This is the case with Drone, only only do we get a new life form but a new character that had a brief, but powerful impact on the ship and it’s crew.

The creation of the Borg known as ‘One’ is both a significant event for the ship and, yet again, another lost opportunity for the series.  Lets start with the significance of One and his impact on the ship itself.

For the past season we have seen a significant growth for the character of Seven of Nine.  Her character has gone from a Borg Drone to a fully realized individual who is still on a quest to find her own identity.  Now faced with the challenge to teach a new Drone the very thing she has come to accept, Seven is forced to utilize all she has learned in the past year or so of existence.  Through this we see just how much Seven has grown in her time aboard Voyager, not only does she no longer wish to rejoin the collective but she has also come to consider the crew of Voyager as her very own collective.  It is through this growth that we also see a hint of a more vulnerable side of Seven. When One sacrifices himself for the greater good, knowing his very existence presents a threat to Voyager, we see Seven react in a way only a human would.  She shows concern, she shows compassion…she even shows grief.

It seems our former Drone is indeed growing, just as Janeway hoped she would. Jeri Ryan does a tremendous job showing the struggle of Seven dealing with these emotions as she tries to assimilate the new and powerful feelings she has encountered.  I particularly love that the episode is book-ended with Seven smiling in a mirror at the start of the episode and it ending with her looking solemn in the very same mirror.  Those moments alone really show how powerful of a character and an actor Jeri Ryan is.

In addition to the emotional impact on Seven, One has a significant impact on the ship itself as well, enhancing several of the systems and even subtly preparing Voyager for future conflicts with the Borg.  In fact, his presence once again alerted the Collective to the whereabouts of Voyager allowing them to continue to track this enemy even moreso.  You can bet that the Borg are paying attention as this is the second time in the last few episode they have appeared, once in the season four finale and now.  Could this be a touch of foreshadowing for this season….well only time will tell.

Now, I mentioned missed opportunities and this one has a massive one that, if Voyager had been made today, would have been explored even more so.  That missed opportunity, well One himself.  While the episode is touching and impactful in and of itself, we never really get a chance to attach to the character of One, nor does much of the crew.  In fact, this would have been a great opportunity to tease the show with an additional character, building him as if he was going to be on the show for a while only to have him sacrifice himself in the same manner.  Imagine the the emotional impact that would have had and the story development it would have allowed.  While this sort of thing seemed to be taboo for Voyager at the time, longer story arcs and all, it seems that this series likes to get close to those poignant moments only to relegate them to a single episode or moment instead of fully exploring the potential they present.  While I am enjoying re-watching Voyager for these reviews I have come to realize that the series seems to be inundated with missed opportunities making the show somewhat lesser overall.

From Ensign Kim not being the ‘real’ Harry Kim to even the brief moment where Janeway and Chakotay were stranded on a planet due to a virus, this series never seems to fully realize it’s potential as it always defaults to the ‘monster of the week’ format, forgoing any long form character development ala DS9.  I get it, they wanted to do something different than the drama on a space station but it is possible to blend the two.  Not to mention that J. Paul Boehmer’s portrayal of One is so good that it almost seems to be a complete waste of this man’s acting talents to dismiss him after one episode.  While the actor does come back as other characters, it is such a shame that he never got to explore this character to the fullest extent. 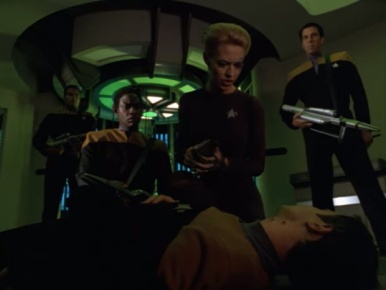 Thanks for reading the Retro TV Review,  I look forward to discussing the rest of the series with you, one episode at a time every Monday, Wednesday and Friday!  Next Review Season Five Premiere: Extreme Risk