Part four in the continuing story of the Dominion Invasion begins and things are still looking bleak for the Federation.  Not only does it look like they have lost DS9 for good but it also looks like they may have lost their hold on the Alpha Quadrant as the Dominion closes in. Things go from bad to worse as Sisko loses command of the Defiant and the Female Changling makes a play at Odo.  Originally airing on October 20, 1997, this is Behind the Lines.

Kira learns that the Dominion has found a way to deactivate the minefield around the wormhole and the station is soon visited by the Female Changeling.  Meanwhile, Jadzia takes over the Defiant after Sisko is relieved of command.

Story A: Loyalty and The Great Link

On Terok Nor Kira and Rom watch as Damar walks into Quarks Bar and watches as the Cardassian officer looks desperate in his search for his missing PADD.  Soon a group of Jem’Hadar approach Damar with the PADD and a fight breaks out.  It seems someone has left sensitive information for the Jem’Hadar to find furthering the rift between the two peoples.

After the fight, Dukat and Weyoun discuss the matter wondering how Damar managed to allow incriminating information to get in the hands of the Jem’Hadar.  It is clear that there is a rift forming between the two groups.

Odo and Kira meet in Odo’s office where the Security chief makes it clear he is unhappy at the event in Quark’s Bar.  It seems that Kira and her rebel cell were behind the event and while Odo is upset at their actions, Kira reminds him that the war is not going the way they want it to.  Odo is shocked that Kira appears to be questioning his loyalty when they are interrupted by the female changeling who insists Kira leave the office.

The Female Changeling observes that Odo and Kira appear to have become more intimate and informs Odo that, due to the mining of the wormhole, she has become trapped in the Alpha Quadrant.  She tells Odo that she has come to spend time with one of her own to which Odo is shocked. He has not forgiven her for making him a solid nor her war against his friends. She leaves him with a loose invitation for them to spend time together so that he better understands her point of view. 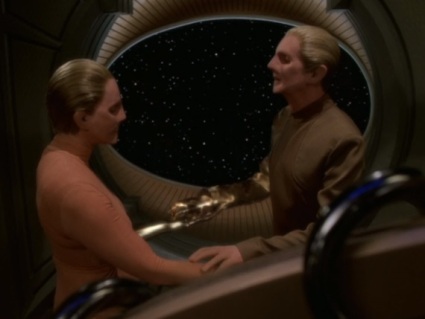 The next day, the female changling interrupts a security briefing and it is clear that things are not good between Dukat and Weyoun.  As Odo heads out to work, she asks him to be allowed to join him in his quarters to talk. There she learns that he took her early lessons to heart and is pleased to learn he has been practicing his shape-shifting. She soon begins to talk with Odo about his love of Kira and offers a chance for him to be free of his pain when it comes to his feelings.  They link giving Odo  the clarity he so desperately desires.

In Quarks, the bartender learns that Damar has been promoted to Gul and the Cardassian indicates that he is about to intact history.   During a meeting of the Resistance, Kira, Rom, Jake and Odo are visited by Quark who has news for them.  It is clear that Quark is drunk but using his lack of inhibitions he informs them of what he has learned. There are thousands of Jem’Hadar ships on the other side of the wormhole and Damar has come up with a way to deactivate the very minefield preventing them from arriving in force.  They soon learn that they need to deactivate the deflector array in order to prevent the mines from being deactivated.  With a plan in place that hinges on Odo’s participation, they begin their mission.

In Odo’s quarters, Odo discusses his existence with the female shapeshifter who keeps insisting that they link instead of talk. There he learns that the other shapeshifters have little in the terms of separate identities even though they can be individuals should they choose.  Soon, he breaks his promise to Kira and links with the changeling resulting in his not being present when Rom attempts to bypass the deflector resulting in Rom’s arrest for sabotage and the possibility of the Dominion being able to deactivate the minefield.

Kira charges into Odo’s quarters furious that Odo was not where he promised he would be.  Odo acts as if it is not a big deal as he was in the link and nothing really mattered.  It is clear that Odo has been compromised and there is nothing that can be said to him to change his mind. Kira leaves and the female changeling steps out of the shadows.  Odo is now one of them.

Story B Changing of the Guard

At Starbase 375 Sisko performs what has become a ritual during the war, placing a spent phaser power cel on display for all to see.  He is soon visited by Admiral Ross where Sisko is informed that they have identified a communications relay that can detect ships from five sectors away and he wants Sisko to determine the best course of action to take it out.

Sisko formulates a plan that involves Sisko and his crew to travel through the dangerous Argolis cluster.  Approving the plan, Ross sends Sisko to prep his crew for the dangerous mission ahead. Soon, Sisko is shocked that Ross has reassigned Sisko and plans to place Dax in command of the Defiant, it seems Ross is impressed with Sisko’s efforts and sees this as a promotion.

With Sisko absent from the ship, Dax prepares the Defiant for their mission.  Sisko pays a visit to give the crew a final briefing and watches as his ship and crew depart for a mission that he feels he should be on.  After some time and much worry on Sisko’s behalf, The Defiant returns from a successful mission much to Sisko and Ross’ approval. Sisko watches on with pride and sorrow as it is clear his crew can operate without him.

As the fourth part of the Dominion Invasion this is one that really establishes the threat that is only getting worse.  Now that the Dominion claim to have a way to disable the mine field, it is only a matter of time before the war comes to a very dangerous head.

Behind the lines we have Kira and her desperate attempt to sabotage the very group she is publicly a part of.  While she has a small group of allies it soon becomes clear that Odo has become compromised and it is Kira’s fear that through his actions, the Alpha Quadrant might have been lost.  For Odo, it is simply a matter of seduction.

Being a changeling affords Odo the ability to assume many forms but, even though he is more than capable in his ability to have a sexual relationship with solids there is one thing a solid can never provide.  A link.  For much of his life Odo has been alone and when he is finally presented with a chance to join with one of his own, Odo goes for it and ultimately falls for the biggest and oldest trick of them all, the Honey Trap.    Let’s be honest here, the female changeling knows very well what she is doing and has every intention to seduce and control the constable. Can the constable find a way out of this trap, or is he planning one of his own? we will just have to wait and see.

On the flip side, we get a taste of what it means to be in charge from the perspective of Captain Sisko.  Sisko’s story is one of moving the chess pieces.  While it makes perfect sense to keep him on the Defiant, his move to more of a tactical role in the war against the Dominion is just to get him in place to plan the formal attack to retake DS9. While this has not been fully revealed yet, it is there for the gleaning if you know where to look. I mean, if you really think about it, how could Sisko even think to plan an attack if he were buy running sorties on the Defiant?

All that being said, Sisko letting his crew go to war without him is one of the most painful things he has been asked to do so far.  It is simply not in his nature to sit back and let his crew do the heavy lifting.  What makes him such a great Captain is the he is one to lead from the front lines not from a desk with a map.  It is because of this nature that his crew trusts his judgement no matter how insane his choices may appear at the time. They know though that even though he is not with them that doesn’t mean he doesn’t have a plan.  Just what plan does Sisko have in mind?  Well, you will just have to wait and see!

Overall, another strong episode directed by LaVar Burton that really manages to build the tension into the last episodes of the Dominion War. 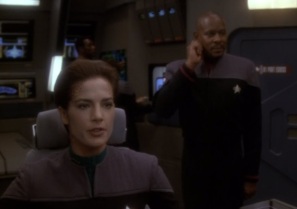