Okay, Halfway through the sixth season and we have seen everything from a major battle with the Dominion to the return of Gul Dukat. What could they possibly do to top that?! How about a Trek remake of Honey I Shrank the Kids? Originally airing on February 18, 1998 this is One Little Ship.

After an attack by the Jem Hadar, the crew of a miniaturized runabout help Captain Sisko to recapture the Defiant.

After sending the runabout Rubicon into a strange vortex that will shrink them to minuscule sizes, Julian, Jadzia and O’Brien find themselves stuck in their miniature forms after the USS Defiant is attacked by the Jem’Hadar.

Jadzia and the crew of the Rubicon head back after learning they are no longer tethered to the Defiant. Meanwhile, the Jem’Hadar begin their takeover of the Federation ship. It is soon clear that the soldiers of the Jem’Hadar have an internal conflict between the old and new guards. Soon they summon Sisko with the intention to interrogate the Captain of their captured prize. After a brief discussion with Sisko, the Jem’Hadar make it clear that they have no intentions of letting them go. In fact, the crew are now nothing more than bargaining chips for the Jem’Hadar leader to force Sisko to repair the engines. 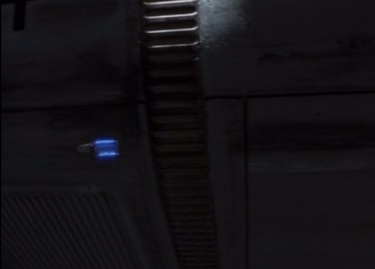 Outside of the Defiant, Jadzia and team discover that, while they have made it out of the Vortex they are still in a miniaturized state. Knowing they can not communicate with their friends on the ship, they begin a plan to enter the Defiant through one of the plasma ducts but soon find themselves in trouble when the engines begin to power up. Busting through, they soon find that the ship has been taken over by Jem’Hadar and they need to come up with a plan to help their friends retake the ship. Monitoring from afar, they soon determine what Sisko is planning based on his console screens and find their way to assist them.

Working their way through the ship, the tiny crew of the Rubicon find a way to make it to the bridge in order to help take over the ship. Beaming into one of the stations, Miles and Julian begin to work on resetting the primary safeties juncture. Just as it looks like they are about to fail, the two manage to reset the command codes just in time.

In engineering, Sisko and the crew find themselves facing the Jem’Hadar. The leader of the group confronts the Captain about their slow repairs and, when it is discovered that the engines have been repaired for over an hour, The Jem’Hadar First is furious. Knowing that their friends are in trouble, the crew of the Rubicon arrives and begins to attack giving the Defiant crew the edge they need to retake the ship. 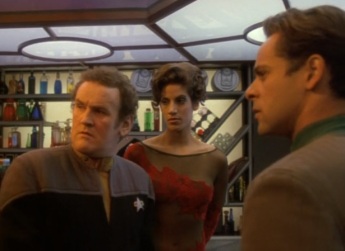 Back on the station, with the Rubicon crew restored, Worf teases Jadzia with a fake poem and Odo notes that O’Brien and Julian seem shorter than they originally were. The two rush to the infirmary with Odo and Quark laughing at them.

Sure, we have seen giant space babies, we have seen omnipotent beings, we have even seen time travel to save whales but sometimes a premise is just dumb and, to me, this is one of those. Don’t get me wrong, I like lighthearted episodes as much as the next person and, with how heady the last one was, we needed a little break but this seemed…a little too silly, even for Star Trek.

This episode just doesn’t work. To start with, these new Jem’Hadar must not have much in the way of peripheral vision. Based on the show’s own logic the Rubicon must have been the size of a 1/16 scale model car so about a foot long. Now imagine a foot long car flying around in your living room, or better yet, imagine a drone flying around in your home. Such a thing would become pretty obvious especially if it ends up FLYING RIGHT IN FRONT OF SOMEONE’S FACE! Yeah, they did that and the Jem’Hadar just looked around like he might have noticed a fly that was bothering him.

Then of course there is the severe lack of killing on the Jem’Hadar’s part. I know they explain this away as these are part of the ‘new’ Alpha Quadrant breed but still, every other time we have a group of Jem’Hadar attack they are pretty violent folks. The fact that pretty much everyone on the Defiant made it out alive and relatively unscathed is either a testament to the Defiant’s crew or just shows us how lame the Jem’Hadar were in this particular engagement. I mean, I guess we can blame it on the fact they are running out of Ketrecel White but still, these were pretty terrible Dominion Soldiers.

Overall, even though it was a ‘fun’ episode, this was also a pretty lame one. Doing nothing for the character or the overall plot this is the definition of a filler episode and one that was certainly not necessary. In a way, it almost feels like the writers were running out of ideas at this point.

All that being said, I will say the visuals in this one were pretty cool. I mean, it was great watching a miniature Rubicon fly around doing things. Plus having Julian and O’Brien actually walking among giant computer components was pretty rad. Not enough to make it a good episode but certainly enough to make it entertaining.