Cults have continuously been both a source of interesting news and used as a tale of caution. Many times a cult arises through a charismatic leader who, while they think they are in the right, only end up using their followers for some rather unsavory things. Now, what would happen if Dukat himself were to lead such a cult?  Find out in the episode that originally aired on November 25, 1998.  This is Covenant.

Colonel Kira finds herself kidnapped a Pah-Wraith worshiping cult only to discover that their leader is none other than Gul Dukat.

After discussing religion and faith with her friends at Quark’s Bar, Kira retires to her quarters where she is visited by her old friend Vedek Fala.  Happy to see him she and Fala discuss their time in the occupation. However, after Fala gives her a gift, Kira finds herself transported to DS9’s sister Station Empok Nor where she is greeted by the leader of the Cult of the Pah-Wraiths, Master Dukat. Kira is shocked at Dukat’s appearance as the Cults leader but, as he explains his position with the cult, Kira realizes that he has some strange control over his desperate followers.

Fala tries to sway Kira’s feelings about the Cult by showing her how his people live.  Escorting her through the station, Fala shows Kira that everyone seems happy with their situation even meeting a young woman named Mika who is close to term with her pregnancy.  As Kira explores the community she becomes more and more convinced that there is something insidious going on despite the faith the cultists have in Dukat and his teachings. Seeing an opportunity to escape, Kira takes a gun and is soon stopped by the very people she is trying to save.

After waking only to find Dukat tending to her wounds, Kira tries to tell her captor that he can never make up for the years of pain and suffering he visited on the Bajorans.  Despite his apparent reform, Kira sees this new position as yet another attempt by Dukat to subjugate the Bajoran people.  Dukat, however, insists that he is a changed man and that he truly cares for his people.  Soon, they are summoned away as Mika’s child is nearing term.  Things take a turn however when Mika’s child ends up being half Cardassian.  Despite the obvious, Dukat convinces the crowd that this blend is a sign from the Pah Wraiths telling them that he has been speaking the truth. To Kira’s surprise, the Cult, including her friend Fala, immediately accepts the blatant lie.

After discussing the matter with Fala, Kira visits Mika’s husband Benyan and plants the seeds of doubt in his head.  As they leave his quarters, Dukat and Mika meet secretly by an airlock and, when Mika indicates that she may have to tell her husband the truth, Dukat attempts to kill the young woman by exposing her to the vacuum of space. Just as Mika nears death, Kira finds the young woman and manages to save her. In the infirmary, Kira calls Dukat out among his followers causing even more seeds of doubt to be planted.

After praying to the Pah Wraiths, Dukat calls his followers together and informs them that the Pah Wraiths have asked his people to end their lives so that they may join in their battle against the Prophets.  His cult believes him and, Kira is distraught having found herself incarcerated unable to help.

After Dukat informs Kira of his plans, Kira escapes her cell to stop the deaths of the cultists. Knocking over the plate containing the pills, Kira watches as Dukat desperately searches for the poison pill he was about to take.  It is soon clear that he had no intention of dying with the rest of them and soon they realize what is going on.  Almost instantly, the crowd turns on Dukat and he escapes via a secret transporter device.   Just as Dukat leaves, Kira is shocked to see her friend Fala take one of the poison pills claiming that he still has faith in the Pah Wraiths.

On her way back to DS9, Kira confides in Odo that she believes Dukat has convinced himself that he is doing the bidding of the Pah Wraiths making their Cardassian foe more dangerous than ever before.

This episode marks the return and, yet another re-imagining, of the infamous Gul Dukat.  Dukat has had many forms throughout the series, from vile Cardassian Commander, loose ally to a man driven insane but this most recent version is, as Odo and Kira believe, the most insidious to date. Why?  It is simple, he now has a purpose. 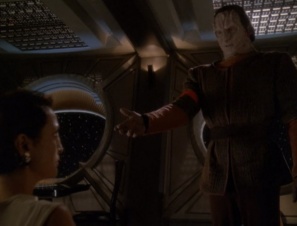 For too long Dukat has simply served a combination of his own whims with a loose dedication to the people of Cardassia.  For much of the series Dukat firmly claimed that he was trying to do what was right for his own people while he attempted to prevent as much suffering on Bajor as possible.  Before long it became clear that he never really believed in anything, even really himself, and was greatly purposeless through much of his endeavors.  This became worse when the Dominion subjugated Cardassia effectively making Dukat  not only homeless but nation-less. All of this was steadily coming to a head when something unexpected happened, Dukat was possessed by an actual Pah Wraith. Using Dukat, the Pah Wraith closed the wormhole and began what would essentially become the final battle between good and evil.

Having been inhabited by a cosmic entity such as The Pah Wraiths, Dukat would certainly be a changed man.  This is a man who has really had no time for religion and belief suddenly finding himself exposed to a power literally greater than himself. Imagine what this would do to a person who has been searching for acceptance his entire life?  Now, for the first time in his existence, he has confirmation of something greater that, not ironically, uses and leaves him as he himself has done to others many times before.  So, when Dukat finds a group of people desperate fore leadership, how could the newly ‘awakened’ emissary of the Pah Wraiths resist? Now, not only does he have his acceptance, he has what he sees as a clear path back to the Pah Wraiths themselves. Even after his abject failure leading these cultists, it is clear that the Dukat that has emerged is far more than he once was.  The Dukat we now see is far more than the Station Commander, more than the head of the Cardassian Government, more than the ships Captain, this is a man with a definitive purpose and that purpose is contrary to everything Sisko and his team have been fighting for since day one.  Dukat wants for nothing less than godhood.

While Dukat may have been the primary focus of the story, one major plot point in the episode is one of faith.  From the opening conversation between Kira and her friends to the death of Fala, Faith is the reoccurring theme that is explored in so many ways.  With Kira we see that she stands firm on her belief in the Prophets despite the difficult times however that is not so with the Bajoran cultists she is determine to save.  They have lost faith and that loss in faith can be clearly seen in the eyes of Fala, her old friend.   When the wormhole closed many Bajorans saw this as the Prophets, who they have followed their entire lives, abandoning them and their believes.  While many managed to ‘keep the faith’ this singular event fractured the people of Bajor causing many others to begin worshiping those that were known as Pah Wraiths hoping for any semblance of guidance from them. Being ripe for a charismatic leader to take over, it was only a matter of time before someone stepped in and that someone just so happened to be none other than Dukat himself.  As mentioned above Dukat shows a dangerous faith in both the Pah Wraiths and in his own ambitions providing a very interesting take on this classic villain.

Literally taking it’s story from the headlines, this episode is a grim exploration of just how convincing and dangerous cult leaders can be to those who are lost and what it means to lose faith in everything. 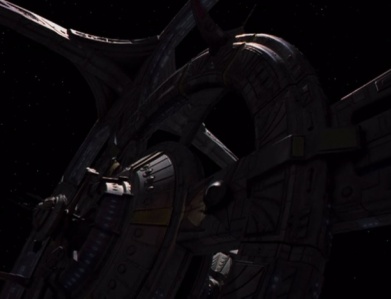 Thanks for reading the Retro TV Review,  I look forward to discussing the rest of the series with you, one episode at a time every Monday, Wednesday and Friday!  Next Review: It’s Only A Paper Moon