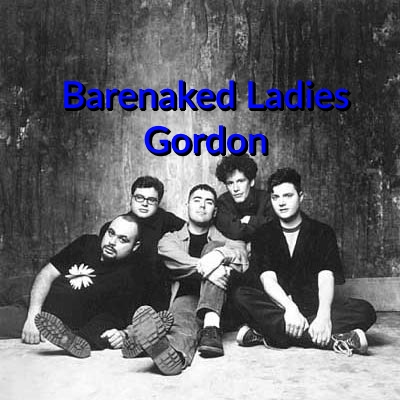 The Barenaked Ladies (BNL) burst on the scene in 1998 with their hit song ‘One Week’ from their album Stunt.  Most people were introduced to the band with this album, but what many do not realize is that BNL had already produced and released  three previous full length albums and a live album.  Why did no one know them in the United States, well for one, they were Canadian.  Not that being Canadian is a bad thing, it was just, well in the early 90’s the internet was still a newer development and getting exposed to the U.S. market was not a very easy thing to do.  Sure, we had MTV but unless you were from Seattle in the early 90’s or had a hit Rap album, they didn’t really care.

I discovered BNL quite by accident, as I did much of my music.  I think it was between 1994 and 1996 when I heard a song off of their album ‘Born on a Pirate Ship’ called “If I had $1000000′.   I found it clever and fun so, of course, I went to find more.   Soon I discovered their first album, Gordon and I was completely hooked.

‘Gordon’ is one of those rare Freshman releases that really works out of the gate.  Every track just…works.  From their song about being in high school ‘Grade 9’ to their prediction of their musical career future in ‘Box/Set’ they had a clever humor coupled with fun music that kept me coming back for more.

Between Steven Page and Ed Robertson trading off vocals and Jim Creeggan’s amazing bass riffs, this album just delivers.  Sadly, not many folk know about it.

Even sadder still, in 2009, Steven Page left the band amid some personal issues and, while they are still good, to me they never recaptured that certain something they once had. BNL still tours to this day and, although Page is no longer with them, I hope to see them live one day.

The first track that really strikes me is Brian Wilson.  Named after the lead singer of the Beach Boys, it invokes a sense of isolation, loneliness and rainy evenings.  It’s a song that puts to music the feeling of depression but in a way that makes you realize that, when you are depressed, you are not alone in it.

The next hit me harder later in life after having a number of failed relationships in my twenties.   This one is called Blame It On Me and combines both Ed and Steven’s vocal stylings in a wonderful and touching song about couples and arguments.

You’ve likely run across this disc in a bargain bin before and didn’t give it even a second glance, which is a shame because you had a gem in your hands.

If you still want to give it a go, grab a copy here for $15.  It’s pretty great. Of course you can also stream it on Spotify so, it’s up to you.

So there you go.  I hope you enjoyed today’s album as much as I do.  If not, that’s cool…there will be more.

Thanks for reading, If you would like to read more reviews I have a weekly series called Key Movies Of My Life that comes out every Wednesday and also a complete review of Star Trek Discovery. Be sure to check out our contributor Darkmovienight with the New Movie Reviews every Sunday.  You can also find a few of my other Music Reviews Here.

As always, please feel free to comment below and share your experiences with these movies as well. If you just happend by, tell me what you think! Don’t Forget To Follow us if you like the blog!

One thought on “Stand Out Albums: Barenaked Ladies ‘Gordon’ (1992)”