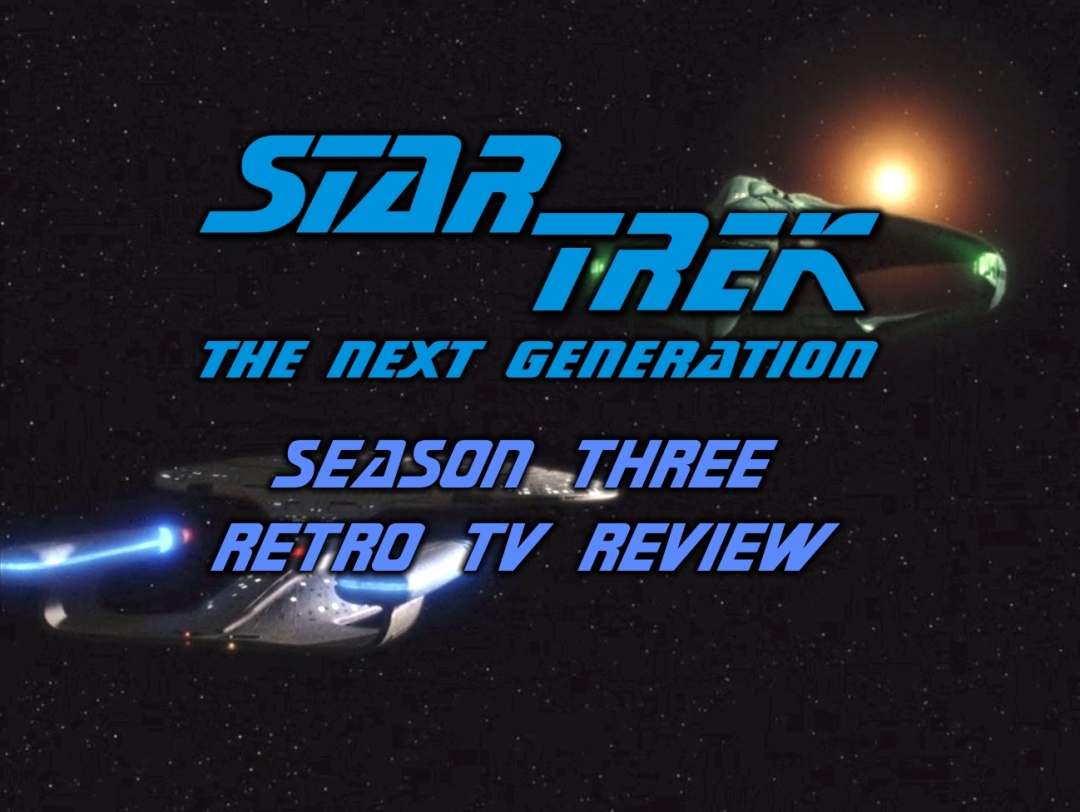 Sometimes even Star Trek falls prey to the intrigue of…Trade Negotiations.   Originally airing on November 13,1989 this is The Price.*

The Enterprise is called on to host a negotiation for the only known stable wormhole that leads to the Gamma Quadrant. Meanwhile, Troi takes a personal interest in one of the opposing negotiators.

Troi’s much needed break is interrupted when Picard requests her presence at a reception for the negotiators.  While there she meets the delegates and notices a man by the name of Ral who sparks her interest. After the initial negotiation, including the Ferengi arriving, Ral visits Troi in her quarters and…invites her to dinner.

Meanwhile, the Ferengis poison the human delegate causing Riker to have to take over for the Federation negotiations. Soon, Ral and Troi take some more private time and he reveals that he is part Betazoid himself and this makes him a better negotiator.  This is also the reason they are so attracted to one another.

In order to test the Wormhole, the Enterprise and the Ferengi both send shuttles into the wormhole.   They discover that the wormhole does not lead to where they thought they would, instead they arrived in the Delta Quadrant, some 200 light years away!

Warning the Ferengi that they will be stuck in the Delta Quadrant of they stay, Data and Geordi return home. The Ferengi, Arridor and Kol are left behind after choosing to ignore the warnings.

Wow, this one is as bad as the Republic Trade Negotiations…

I won’t go any further into this… There is of course a minor threat but things all work out. The Negotiations continue and eventually the Chrysalians win under Ral’s negotiation skills but it turns out the Wormhole is not as stable as they previously thought and Ral is called back to address the issues at hand.

Okay, first dud of the season. Seven of Eight ain’t bad for a stretch.

At its core this is very much a Deanna Troi episode and it shows why we don’t get them very often.   Troi is a fantastic supporting character but when she takes the lead, her stories are just not that great.  This is no fault of Marina Sirtis but really the fault of the writers who, at this point, haven’t quite figured out how to portray her on her own yet.  She does get a little character development but not enough to make much of a difference. If anything, it’s just a little uncomfortable for everyone.

While the story is pretty dull and uninteresting we do get to see a few races we haven’t seen before, including the Barzans and the Caledonians.  We never see or hear from them again but that’s something…right?  Other than that, There really isn’t much in this episode.  I’m sure it looked good on paper, it’s just not good on film.

We get our first visit to the Delta Quadrant a place not fully explored until the later series Star Trek Voyager.

This marks the first appearance of the Barzan race.  We will see them again on Star Trek Discovery.

We find out what happened to the two lost Ferengi again in the Voyager Episode False Profits.  If anything, this is the good that came from such a boring episode.

It won’t be until Deep Space Nine that we see a truly stable wormhole and that one opens up a to a whole other set of problems.

There is a minor inconsistency in this one as well.  It has been previously established that Betazoids can’t get any feelings off of Ferengi but Troi claims she can sense deception from DaiMon Gross.   I call shenanigans.

Troi indicates that she has ‘no other men’ when talking to Ral.  Ral asks about him but, despite her previous jealousy, she dismisses him pretty much out of hand.  I don’t begrudge Troi her pursuit of love at all, I mean Riker isn’t one to not have his day in the sun. But girl, you need to let Riker go or just tell him you love him and to stop playing around.  Get that baggage over with one way or another.

*Hint, the price is a hour of boredom.

Thanks for reading the Retro TV Review,  I look forward to discussing the rest of the series with you, one episode at a time every Monday, Wednesday and Friday!  Next Review: The Vengeance Factor