Doctor Crusher gets the center stage in this episode when she starts to find that members of her crew are vanishing.   What is going on?  Find out in the episode that originally aired on October 22,1990.  This is Remember Me. 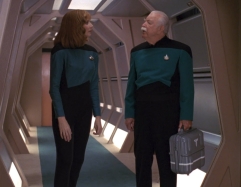 Doctor Crusher welcomes aboard an old friend but, after a warp field experiment, she discovers members of the crew have started disappearing from the ship and no one but her seems to notice.

Wesley is busy working on a special project focusing on the Warp Fields of the Enterprise.  As he works, a flash occurs but neither he nor Geordi can explain the phenomenon.  Turning to speak to his mother, who had just come down to speak to him, he discovers she has already left Engineering.

The next morning, Beverly goes to visit her old friend, Doctor Dalen Quaice, only to find him and his property missing.  No one seems to remember the old Doctor coming aboard nor can they find a record of Beverly’s friend.   The man that she came aboard with has vanished and Beverly appears to be losing her mind.

Soon additional crewmen begin to disappear all over the ship.  Wesley reports that there is a strange engine reading that may be the cause of the disappearances.  As things progress she learns that the crew has diminished from over a thousand people to just over 200.   Beverly is the only person who remembers the missing crew while everyone else believes her to be insane.

Soon a strange vortex appears in her sickbay and threatens to pull her in.  Something is certainly wrong aboard the Enterprise.

It all turns out that the Warp Field experiment started at the beginning of the episode and it has been Doctor Crusher who was caught in the warp field and no one else.  When we first saw Wesley, a flash of light occured and that was the moment she was trapped.

We soon learn that Wesley has been working to get his mother back and just when he believes she is lost, the Traveller arrives to help get Beverly back to the real universe.  After much techno sciencey stuff, they get her back.  All is good and then the Enterprise continues on its way.

This is sort of a sequel to the season one Episode Where No One Has Gone Before.  The experiment Wesley is working on that caused the warp bubble is based on Kosinski’s theorems.  There really isn’t much in the way of character development nor any special socio-political statement, just good old fashioned science fiction.

Gates McFadden does a great job running solo on the ship when she is trapped alone in the warp field.  From her perspective, she is in the real universe and everyone else has disappeared.  Her gradual but apparent anxiety over the situation is palpable and she pulls it off well.

This is also a good continuation of Wesley’s story in becoming something beyond himself.

Overall it is not a bad episode, it is far stronger than much of the first two seasons episodes, and that in itself is something.  It may be one of the weakest episodes in the season, but it is still worth the watch. 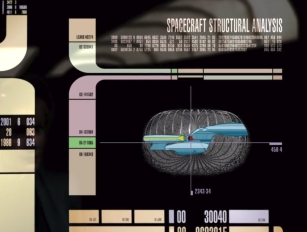 The Traveler returns and we will see him again in a later episode.

When the computer shows the warp field collapsing it clearly shows that the bridge is nearly being consumed.  With how long Beverly is on the bridge at that time she should have vanished as well.

This episode has a similar storyline to a Stephen King story called The Langoliers, in which a group of people end up in between minutes and risk being erased.

Thanks for reading the Retro TV Review,  I look forward to discussing the rest of the series with you, one episode at a time every Monday, Wednesday and Friday!  Next Review: Legacy