‘Between the time when the oceans drank Atlantis and the rise of the sons of Aryas, there was an age undreamed of. And unto this, Conan, destined to wear the jeweled crown of Aquilonia upon a troubled brow. It is I, his chronicler, who alone can tell thee of his saga. Let me tell you of the days of high adventure!’

The 80’s were a time of amazing films. Every type of film you could imagine were being made and there was literally something for everyone.  One genre that took advantage of the box office explosion was that of Sword and Sorcery.  Playing off the newfound popularity of medieval themes, magic and might, Raffaella De Laurentiis produced the first of two Conan films starring none other than Action star Arnold Schwarzenegger.

Arnold stars at the titular character in an origin story of the famed literary character brought to life on the big screen.   Having had his family butchered before him, young Conan grows up a slave in  the land of Aquilonia only to grow up to seek revenge upon the man responsible for the deaths of his family. 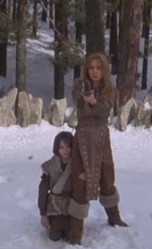 When this movie first came out, it was a juggernaut.  I remember seeing this film in the theater with my father and being enthralled by its scope and grandeur. We follow Conan through his journey from innocent boy to brutal warrior, from being a slave to eventually earning his freedom and what that journey means to him.   At its core it is a film about destiny wrapped in an epic Action film filled with strange monsters, magic and might. It is a tale of redemption and revenge, one that tells its story without holding back.

As I was fairly young, I had not yet ventured into the tales of Conan by Robert E Howard, but this film led me to want to know more about this Cimmerian warrior.  I was not disappointed.

This is one of the true epics of its time.  While not a true interpretation of Howard’s work, it does a decent job in it’s telling of its version of the tale.  It is a powerful film and, even though made over thirty years ago, it has aged very well.  Arnold is at his peak in this film and James Earl Jones as Thulsa Doom is mesmerizing.

The visuals in the film are astounding  from vast vistas to dark tombs, it is a film of scope and grandeur.  De Laurentiis spared no expense in making this one of the most epic and visually amazing films and it shows.  Everything about the film feels real and worn with time, at times it feels as if we are getting a real glimpse into a real universe beyond our own and it is amazing.

The special effects, while dated, still manage to enthrall to this day.  From Conan’s encounter with an evil witch, his battle with evil spirits, to his final battle with Thulsa Doom (Jones) the mostly practical effects still hold up making the film a little more real than the heavy cgi dependant films of today.

I would be remiss if I didn’t mention the score.  Throughout the film, we are treated to an amazing fantasy score by the famous Basil Poledouris who is also known for his work on RoboCop, Hunt for Red October many more. His score is one that sets the tone for such an amazing journey and really gets the blood flowing when the action ratchets up.  Every note hits just right and gives the film a gravitas that can not be denied.

All in all, this is a fun film of swords and sorcery.  It is an epic that will outlive many of its time and will continue to entertain for generations to come. No matter how you feel about this interpretation of the legend of Conan, if you grew up in the 80’s or this is your first introduction to Howard’s Cimmerian warrior, you will love Conan the Barbarian.

I don’t know that this film has ever gone out of print.  You can get this one from here for around $12 and it is totally worth it. If you don’t like this film then you should contemplate this on the Tree of Woe.

Of course,  the Trailer:

Thank you for reading today.  I hope you enjoyed the review. If you would like to read more reviews I have a weekly series called Key Movies Of My Life that comes out every Thursday and also a complete review of Star Trek Discovery.  We also have a fun Retro TV Review series in which we are currently reviewing the entire Star Trek The Next Generation Series, episode by episode.