Time is once again explored in the penultimate episode of Season Six.  Originally airing on June 14,1993.   This is Timescape.

Data, Picard, La Forge and Troi return to the Enterprise and discover it to be frozen in time with only moments away from destruction. 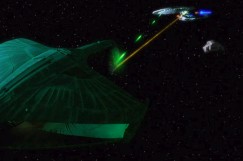 The Enterprise receives a distress call from a Romulan vessel while waiting for Picard and others who are away at a symposium.

On their way back, Troi witnesses a strange event which causes the rest of the members of the away team to freeze in time. As Data, Picard and Geordi work on discovering what has happened, the rest witness the same event affect Counselor Troi.  After experiencing many strange time distortions, Soon they discover that the Enterprise itself is caught in a battle with a Romulan vessel both in a temporal rift of their own.

Finding a way to compensate with the temporal rift using emergency transporter armbands, Picard, Data and Troi beam aboard the Enterprise to determine what exactly has occurred. Upon arrival they find that Romulans have invaded the ship and have attacked the crew. Troi soon finds that an altercation has occurred in sickbay that could result in Dr. Crushers death.   While there, a Romulan is seen to also be able to move about in the temporal rift.

Data soon reports that the Warp Engine is in the process of a breach and has also been frozen in time.   Data discovers that time is still moving but very slowly.  The Warp Core breach has occurred and will envelope the ship in time.  Soon Picard begins to act crazy and the team is beamed back to safety.   It appears that he was experiencing a temporal version of deep sea narcosis.  Picard remains aboard the runabout shuttle as the rest of the team beam to the Romulan ship to determine what has occurred. 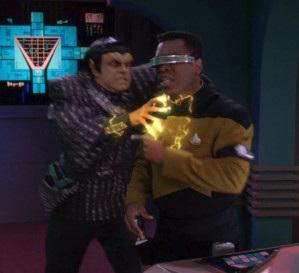 As LaForge and his team continue to try to find information, LaForge is attacked by one of the Romulans who is repelled by the shield but causes LaForge to go into neural shock.  Data scans the Romulan only to discover that he is not actually who he appears to be.  They beam the man aboard the runabout and talk with the man who reveals that he is not one of the Romulans but a man from another time frame.   Their young is trapped in the core of the Romulans artificial singularity and caused the issue. The temporal beings attacked the Enterprise in order to save their young.  Soon, the alien vanishes but not before revealing that there is another being on board the Enterprise.

For another filler episode it isn’t bad.   Lots of things going on in this one make it a little difficult to follow at times but, if you pay attention you can figure it out. Time travel isn’t easy to deal with and this one manages to have a little fun with the subject. No lesson, no deeper meaning, just a fun episode that deals with temporal issues.

Next up,  the season finale and it is certainly more than just a filler episode… 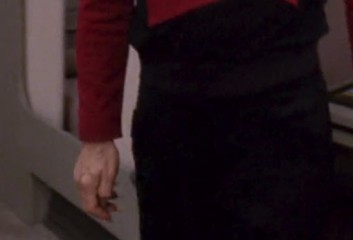 This is the first time we see a Runabout shuttle on Star Trek TNG.  I guess they picked up a few while visiting DS9.

Little continuity error.  Just before Picard experiences a a time distortion that causes his nails to grow, if you pay attention you will see his nails on his right hand are already long when he first sits down despite Patrick Stewart’s attempt to hide them.

This episode was directed by Adam Nimoy, son of Spock himself, Leonard Nimoy.

Thanks for reading the Retro TV Review,  I look forward to discussing the rest of the series with you, one episode at a time every Monday, Wednesday and Friday!  Next Review: Descent