Change is in the air with both characters and events.  With yet another solid entry, this is The Sound of Thunder.

After Saru discovers that he does not have to die after going through puberty, the red angel signal suddenly appears over Kaminar, the home world of the Kelpien people.  Now Saru is forced to face his past and risk violating the prime directive in order to save his species.

There is a song by Nine Inch Nails entitled Happiness In Slavery. In that song, Trent Reznor describes the life of someone who finds, that once you give in to life as a slave, there is a certain joy to the security provided by not being in charge of your own fate, Or, in simpler terms, Ignorance is Bliss.  This is what the Kelpians have lived with for centuries under the Ba’ul and only know that they must sacrifice themselves in order to Maintain the Great Balance. When Saru winds up revealing the true nature of life to his people, this bliss is disrupted in ways that could never have been predicted. 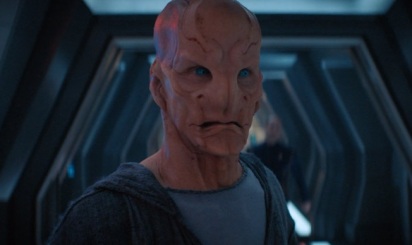 This is a deeply personal episode that follows the newly ‘woke’ Saru as he finds himself with a new strength after his encounter with the giant red data node in Obol for Charon. For the first time we see Saru at his fullest potential, free of fear and determined to do what is best for his people.  Doug Jones does an incredible job in his role depicting a conflicted yet awakened man that will stop at nothing to do what is right regardless of the consequences. I love how this season has actually taken the time for us to get to know this character and how I wish we had had this much development for him in season one.

Interestingly, the title of tonight’s episode might give some foreshadowing in and of itself.  Taken from the title of a Ray Bradbury story, The Sound of Thunder, this references something more commonly known as ‘The Butterfly Effect’. In the original story a group of people travel to the past and inadvertently change the present due to stepping on a single butterfly.   Seeing that it was revealed in previous episodes that The Red Angel is emitting Tachyons, there is every chance that time travel is involved and it is not necessarily going to turn out well. Only time will tell…heh.

All in all, once again an excellent episode that not only had a terrific story but also moved the overarching plot forward. My only complaint was that the Ba’ul are hard as hell to understand without subtitles. But outside of that, More like this please!

Thanks for reading the SciFi TV Review,  I look forward to discussing the rest of the series with you! Some teasers of next weeks episode below!