I love a good cover song.  I especially love it when a band or musician use their own style to reinterpret an old song sometimes even improving upon the original.  As I have said before, I am no Country music fan, but there are exceptions to every rule and this is yet another of them. 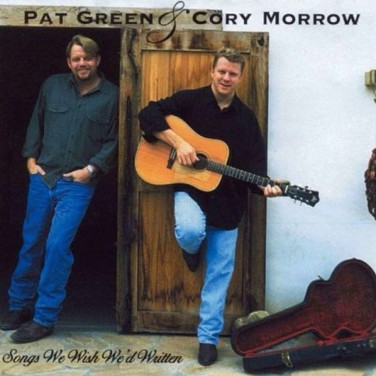 I was introduced to Pat Green and Cory Morrow via a coworker at a feed store in San Antonio Texas.  What a perfect combination to be introduced to a country music album huh?

At that time in my life, I listened to mostly power pop and 90’s rock, much like I do today, but I was always on the search for something new, something unique.   At the feed store, there was a guy, lets call him Marco, who was a huge fan of Pat Green and Cory Morrow but also happened to be the biggest Tool fan I have ever met.  Seeing that Marco had a great varied taste in music, we soon became friends.  It wasn’t long before he introduced me to Green and Morrow with this very album and, well, the rest is history.  Something about it just clicked, I am not sure if was because of the familiar songs or that they were being played in such an earnest fashion, but this album  just sat right with me on so many levels.

I had grown up with the classic country stars, Willy Nelson, Johnny Cash, etc, but never got into country as a whole, this album brought back that little thread of innocence from my past that just felt good. You also have to keep in mind that, at the time I was introduced to this album, I was going through a tough time in my life with a bad relationship and some major changes around the corner.  So it’s not surprising that something with a taste of nostalgia would appeal to me at the time.  The fact that it has since become one of my favorite albums is just a testament to it’s greatness.

The thing I love about these two artists is that they inject a touch of pop and rockabilly into their songs that just makes so many of their songs a ton of fun to listen to.  Sure they have the patented country twang but when you’re from Texas, you can’t help that all the time.  Years later I got a chance to see them both in concert and I have to say, it was everything I could hope for.

Track 3, It’s a great Day To Be Alive (originally by Travis Tritt).  This is one that is on my ‘Those Certain Songs’ playlist and it is still one of my very favorites.  Especially this version.  I couldn’t find this version on Youtube but I did find one where Cory is singing solo.  It’s not quite the same, but it works.

Next up is a cover of Billy Joe Shaver’s finest work.  It is also a song on my ‘Those Certain Songs’ playlist and it is such an inspiration.   Again, the Songs we Wish We’d Written version wasn’t on you-tube so here is a Cory Morrow cover as well.  It’s good.

This is a tough one. For some reason this album is not only out of print but also no where to be found in a digital format.  I am lucky to still have my copy and listen to it on the regular but if you happen across one, grab it.  I found it here on Amazon for $6 and even on discogs for about the same.  Trust me, I would’t steer you wrong,  this is a solid cover album that just hits all the right notes.  pun intended.