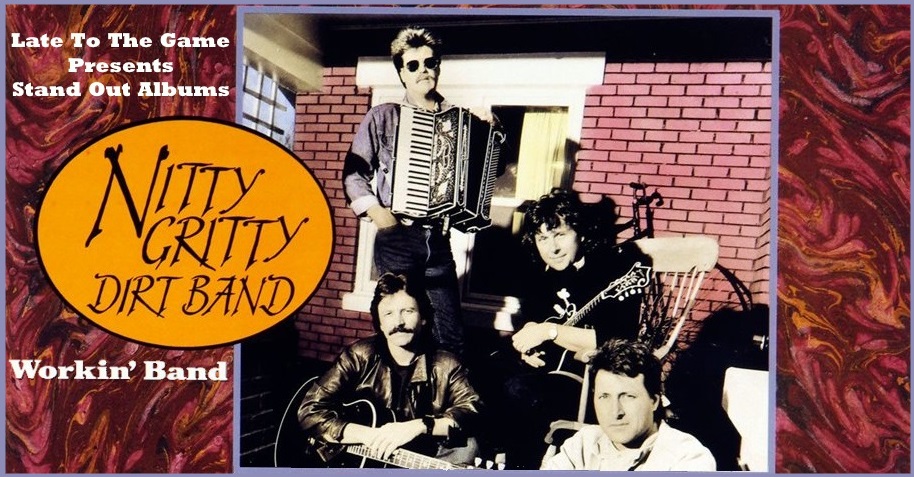 Last week I discussed an album that, once again, had my red neck past nipping at my heels.  I figured that, since I was down here anyway, I may as well tell you about another of my favorite ‘country’ albums which, ironically wouldn’t really be considered country these days but more singer songwriter,  my have times changed. Even more so, they didn’t really start off with a country vibe, filling in more so with the classic 60’s sentimental hippy vibe.

Regardless, I give you today’s album, The Nitty Gritty Dirt Band with Workin’ Band.

In 1988 I was just on the cusp of finding my own music and didn’t even realize that a band from Seattle was going to change my life in just a little over a years time. Even though I hadn’t found my own taste in music, I had mountains of records to go through from my fathers collection.  He had everything from classic Beatles (which we will talk about later) to some of the most obscure stuff you could ever find.   The man had been collecting vinyl for years and every chance he had to get a cheap disc, he was on it in a heart beat.   One of the few albums he purchased new, which was rare those days seeing that we didn’t have much in the way of money, was an album by a band he and my mother had loved since the 60’s, the Nitty Gritty Dirt Band (NGDB). He had every album under the sun from this band, from their debut self titled their most recent entitled Hold On. Call it an obsession, but man he did dig this band.

My first experience with NGDB was with a song that most every person in the world knows, Mr. Bojangles.  It was one of those songs that just stays with you and it was a regular track in our home.   But it wasn’t until late 1988 when I got my hands on Workin’ Band that I realized just how good this group was.

Workin’ Band is an album about the the working class, about the people who labor and toil away every day, watching each paycheck disappear in rent, bills and basic needs only to start the process over every time.  Starting with a song dedicated directly to the working class, the album goes on to discuss, droughts, matters of love, matters of loss and of course, time to just relax.  It is an album that is immediately relatable by just anyone alive with at least one track on it that will really speak to you.

Jeff Hanna and Jimmie Fadden lead the band with vocals that are just fantastic in every way.  Rounding out the core band on bass and piano are Jimmy Ibbotson and Bob Carpenter who also provide some vocals on occasion.  With several others contributing, this band put together what could be considered a perfect album.  It is solid from start to finish, evoking just about every emotion you can imagine and borrowing from dozens of musical styles across the 41 minutes of pure joy.

Bottom line, this is a damned good album and one I still love to this day.

Workin’ Man (Nowhere to go).  This has to be one of the most recognizable songs on the album but it is one of the best opening tracks on any album of it’s time. It sets the tone for a great collection of songs and has a very impactful tale to tell that still resonates to this day.

Down That Road Tonight:  Who doesn’t like a reconciliation song between two lovers?  This one is not about a couple who are broken up, but a song about two people who just want to fall in love with each other again.  It’s catchy and really fun.

Amazingly enough this one is a hard one to track down these days.  You can still listen to it on Spotify though so that’s a win!

Give it a go, I think you might find an album you’ll dig.