Here it is, the penultimate episode of Discovery Season 2 and boy has it been a ride so far.  With only a few missteps, this season has really managed to course correct the entire series fixing much of season one’s pace and tone issues bringing it to new heights. Even with a great season so far, I have to wonder if the show can manage a solid ending or will it stumble in it’s final steps.  Let’s find out in Such Sweet Sorrow.

After confronting Control, and the immanent arrival of the Section 31/Control Armada, it soon becomes apparent that the worst case scenario is their only choice,  they must destroy Discovery.  However, when Discovery has other intentions and, when Burnham realizes what must be done, it is a matter of time that will allow them to the universe.

Before you watch this episode, you really should go back and watch Short Treks.  One specific episode is pretty important to this one and, frankly, I love that they tied it in.

Okay,  ready?   This was by far one of the most enjoyable episodes that had the perfect tone and pacing.  This episode felt so much like the finest classic episodes of Star Trek in the past as well as the best moments of all of the films.  Every actor in the episode was on point creating a wonderfully perfect episode that sets up the finale in only the best way possible.

While I still have some issues with the deus ex nature of the Time Crystals and feel that they were a cheap way for the writers to move the plot forward Star Trek has always required a pretty strong suspension of disbelief and this is just another in a long list. Sure, they are a cheap plot device but without them the story just would not work as Time Travel is a pretty key component and it’s not like they could sling shot around a sun or anything… well…okay but that would have been a little on the nose. Right?

In many ways this episode feels like it is saying goodbye with Burnham prepping for the ultimate trip while the rest of the crew literally say their farewells to their friends and family.  Through the first season I never really felt connected to any of the characters but this season really established the traditional feel of the Ensemble cast that Trek is know for and boy did it work. Everyone, I mean Everyone was at their best in this episode and I found myself wishing that we had another dozen episodes with this crew. 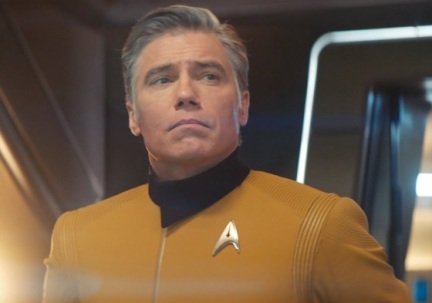 That being said, with any ensemble cast, it takes a strong leader to pull them together and Anson Mount wraps up his role as Captain Christopher Pike in only the best possible way. I firmly believe that the addition of his character to the series was the linchpin that finally gave the series it’s unique voice.  Much like Kirk, Picard, Sisko, Janeway, and Archer before him, Pike brings with him a gravitas that give the series the one thing season one was missing…hope.  Trek has always been about the optimistic future and, with Pike in command, no matter how dark things got, you always felt that he would pull this crew through no matter what.  I have to say, Discovery will be lesser without him in the big chair.

In the end, we are left with a cliff hanger that will be resolved in just one weeks time.  Will the Discovery complete it’s mission?  Honestly, we don’t know.  The future that was seen was well after the events we know happen so it is quite possible that Discovery fails it’s mission and someone in the future will have to pick up the pieces. So really, anything can happen.  I guess until next week…only time will tell.

As always,  some sneak peeks into next weeks episode.  Till then…

Thanks for reading the SciFi TV Review,  I look forward to discussing the rest of the series with you!