Commander Sisko gets the spotlight in the episode that originally aired on November 21, 1993.  This is Second Sight.

Sisko encounters a woman who may not be who she claims to be.

Neither Jake nor Ben Sisko can sleep, four years have passed since the Death of Jennifer Sisko during the Battle of Wolf 359 and neither if the are handling it well.  Even though Jake returns to bed to attempt some semblance of rest, Commander Sisko heads out to walk through the station. As Ben Sisko wanders around he runs into a lovely young woman named Fenna who he instantly connects with, just as he is about to ask her to join him on a tour of the station, she vanishes. 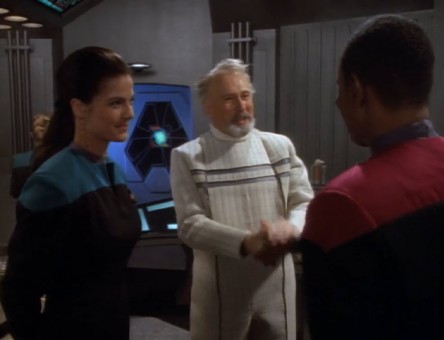 The next morning Ben Sisko joins Dax in the science lab where he meets Professor Seyetik a terraformer who just arrived on the USS Prometheus to conduct an experiment to reignite a dead sun.  The scientist is enthusiastic about the prospect of reigniting the dead sun only to be reminded by Jadzia that it is only a theory for the moment.

Later, while having lunch with Jadzia, Dax notices that her Commander is distracted.  Dax leaves the Commander to his own thoughts only for him to run into Jenna again.  She apologizes for rushing away and requests the tour he promised.  They explore the station together and plan to have a picnic the next day on the upper pylons.  Just as Sisko is getting to know her, she runs off again much to his dismay. That night at dinner, Jake points out that his father appears to be in love and gives his father his blessing.

Determined to find Jenna, Ben asks Odo for help finding Fenna.  In describing her to Odo, The Commander realizes he really doesn’t know much about this mystery woman.  Odo promises to try to help find her even though he has little to go on.

That evening, at a reception in Professor Seyetik’s quarters, Ben is introduced to Seyetik’s wife,  Nidell, who, much to Ben’s dismay, looks just like the mysterious Fenna. Forcing himself not to be obvious,  Sisko continues the dinner as if nothing has happened.  He and Dax note that she acts as if she has never met any of them and doesn’t seem to be the same person he had met.  Staying behind after dinner, he confronts Nidell who acts as if she has never met him before.  When he mentions the name Fenna, she becomes hostile and insists that he has mistaken her for someone else.  Confused, Commander Sisko talks to Odo about his mystery woman and soon learns that Henna could not be Nidell as no one other than the Professor has left the USS Prometheus.

On his way back to his quarters, Sisko encounters Fenna where he tells her that he had dinner with someone who looks just like her.  He is hurt, confused and a little frightened at what is going on.  Knowing that he is falling in love with her, Sisko begs Fenna to tell him who she is. She tells him that she came to the station looking for something, only to discover that something was Ben Sisko. Just as they begin to bond, she literally vanishes in front of his eyes causing him to question his sanity. 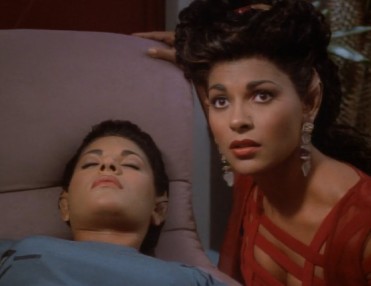 The next day, Ben volunteers to join Dax and the Professor aboard the Prometheus on their mission.  He is determined to find out what is going on and begins to get to know the Professor, even learning how Seyetik met his wife Nidell.  It is clear that the professor adores his wife and it pains Sisko to think that he is causing the man any pain.  Upon returning to his quarters, Fenna is waiting for him.  Determined to see if he is losing his mind, he calls Dax into his quarters where he learns that Fenna is composed of pure energy.  Visiting the Professor, they find that Nidell is in a coma and Seyetik immediately recognizes Fenna, accusing her of causing Nidell to fall into a coma.  Fenna acts as if she  doesn’t recognize Nidell but the Professor explains that Nidell is a psychoprojective telepath and Fenna is one of his wife’s projections.  As long as Fenna is around, Nidell may end up dying.  He admits that they are not doing well as a couple and this projection is his fault.  He recognizes that his wife is unhappy but, as her species mate for life, she can never leave him.

Sisko attempts to find out more about Fenna and finally tells her that she must accept that she is not real.  She must go back to Nidell so that the woman may live and Fenna’s relationship with Sisko must end.  He recognizes that their relationship is just a dream, one that they must wake up from.  They embrace one last time just as Dax informs Sisko that Seyetik has launched himself toward the sun sacrificing himself as he reignites the sun.  He wants to set Nidell free and this is the only way he knows how to.  He flies into the sun, sacrificing himself on the alter of science, reigniting the dead sun.  With that sacrifice, Fenna vanishes, allowing Nidell to live. Sadly, Nidell has no memories of her time with Sisko. 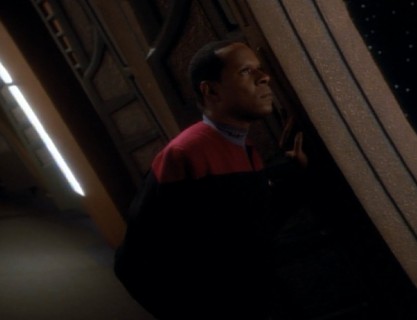 Although we see Ben Sisko in every episode, we really haven’t had a chance to get to know him. Sure, he is the station Commander but all this time he has become more aloof than most of the characters as the episodes have been primarily focused on events on Bajor or with the tertiary characters.   Ben has remained a little bit of a mystery, even though what little we have learned about him through his actions has been impressive.

This episode really shows that the tough and stern Commander is actually a lonely man still pining for his lost love, Jennifer.  It has only been four years since her death at the hands of the Borg and he still can not seem to move on. So, when a woman appears that seems to fill that void for him, he of course seeks out comfort in the arms of this stranger.  Fenna is everything he could want and that should have been his first tip that something was off.  It is as if she was made for him and, in a way she was.  You would think that such a seasoned Commander would have been aware of the oddities surrounding Fenna but I guess love does blind you.

All in all, good episode, one that finally gives Sisko some more depth.

We never see nor hear from Nidell nor Fenna again.

This is the first time we see the interior of another Federation vessel on DS9 since the pilot.  It is interesting to note that the officers aboard the Prometheus are wearing the Type B uniform that was featured on Star Trek TNG while the DS9 crew wear the Standard Duty Uniform (SDU).  It is assumed that the Type B is used on starships while the SDU is used on Space Stations and the like.  The reasoning has never really been established but I dig the look overall.

Thanks for reading the Retro TV Review,  I look forward to discussing the rest of the series with you, one episode at a time every Monday, Wednesday and Friday!  Next Review: Sanctuary