The Twilight Zone has been a mainstay for me for most of my life.  Along with Star Trek, The original Twilight Zone series was a one that I would watch regularly with my dad. Every night in syndication we would watch another of Rod Serling’s classic tales and I would find myself swept into another dimension, a dimension not only of sight and sound, but of mind.

Fast forward 60 years later and once again the journey into imagination has returned.  This time however, writer Director Jordan Peele is at the helm and, after two successful films, he takes on the classic that started sixty years ago.

So, let’s explore the latest episode of  The Twilight Zone.

Today we bring you Point of Origin

Immigration is the topic of today’s dive into the realms of The Twilight Zone.  Today’s story focuses on a housewife named Eve who, after her housekeeper is taken by immigration, finds herself being scrutinized by the HSI in order to determine exactly where Eve comes from.

What if you weren’t from here?  I don’t mean from another country or from another state but literally not from this plane of existence?   That is the concept we are presented with in today’s episode.  After a run-in with HSI (TWZ’s version of INS), Eve soon discovers that she is in fact not who she believes she is and faces deportation to a less than hospitable location.

Twilight Zone as a series is, and has always been, a great platform blending sociopolitical statements blended with strange fiction. Many of these episodes range from subtle hints buried beneath a clever narrative, to stories that literally hit you over the head with it’s message.  This one is one of the latter.    Within minutes there is no doubt what this entry is about and, it is almost lesser for this. What is presented is a fascinating concept but one that seems to have been better on paper than in it’s actual execution,

Don’t get me wrong, Ginnifer Goodwin does an incredible job as Eve, the woman who faces a new kind of deportation.  Along with the small supporting cast, this is one of the most well acted episodes of the season.  There is no doubt in the pain, fear and suffering the characters go through but in many ways it seems too real, too in the nose. Simply put, the visuals and the actors do a marvelous job with what they are given but it is almost too obvious with little to no subtext at all.

Personally, I much prefer the more subtle approach, making people think about what they just watched instead of spoon feeding them the message the writers are attempting to get across. The idea here is clear, this is the modern Twilight Zone’s attempt at tacking Immigration policy and it’s affect on the individual person rather than just an entire people group.  This one hold up an obvious mirror to the current actions and policy that the United States has enacted in recent years, giving a slightly different perspective that really isn’t different at all to the stark reality we are currently facing. 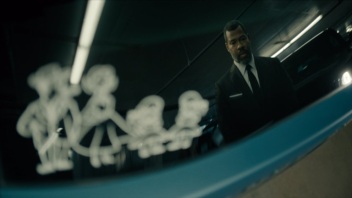 As I said before, The Twilight Zone has always tried to tackle the hard subjects and this one certainly doesn’t shy away from that tradition.  In the past, episodes were known for their ability to get into your head through subtle pretext and insinuations.  Unfortunately, It seems that the modern take feels it needs to be as blunt as the subjects they are tackling in order to yell louder than the things it is in a shouting match with.  Maybe this is due to the nature of humanity these days, we tend to only pay attention to the thoughts and ideas that are hammered into our heads with blunt force trauma. While it doesn’t really make for good fiction, maybe a dose of reality is really what is needed to get the point across. Then again, maybe we have actually slipped into another world ourselves and those stories are meant to remind us of what we lost in our trek to The Twilight Zone.

Next Episode: The Blue Scorpion