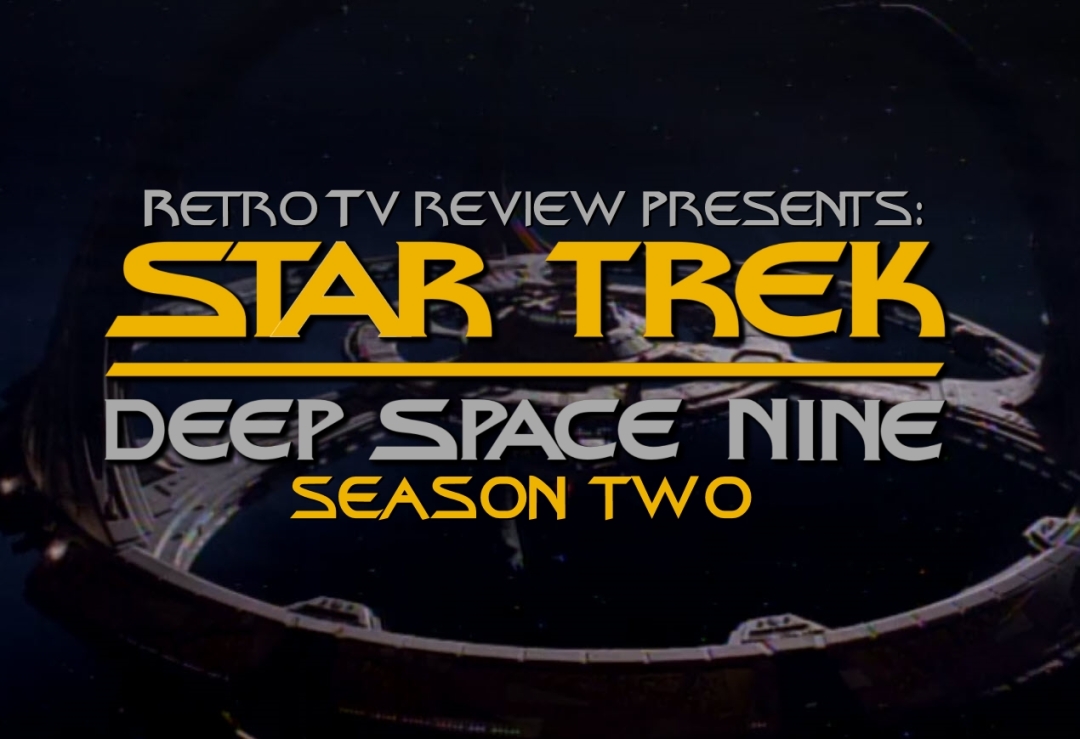 On Cardassia there is no such a thing as Innocent until Proven Guilty.  To them, if you are put on trial, you are guilty before you even step into the court room.  But what happens when a Federation Officer faces that very trial?  Find out on the episode that aired exactly 25 years ago today on June 5,1994.  This is Tribunal.

Station Log Stardate 47944.2 (wow how long has it been since we’ve seen a Stardate?) Tribunal. 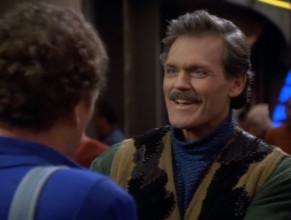 Preparing to go on vacation with Keiko, Miles O’Brien hands off his duties to Dax and the rest of the Ops team.  Determined to make sure everything is perfect before he leaves, Sisko and the team have to force him to disembark lest he waste his vacation on the station.  Just as he is heading out, Miles runs into his old friend Boone who he served with on the USS Rutledge.  They had served together during the Cardassian war and Miles is happy to see his old friend.  After their exchange, Boone replays his conversation with O’Brien, clearly he had intended to run into his old shipmate. 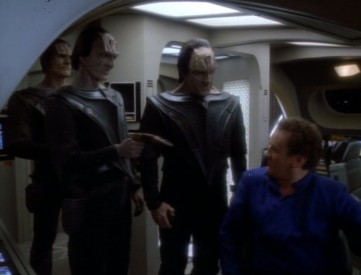 On the runabout, Keiko tries to get things finalized for their vacation and chastises her husband for bringing technical update manuals with him to study while away.  While upset, she is not surprised that he brought them along and he soon tries to make up for it.  Just as things are getting romantic, a Cardassian patrol ship intercepts their runabout causing Miles to raise shields.  He is contacted by Gul Evek who informs him that they will board the vessel for inspection or the Cardassians will take action against them.   Upon beaming aboard, the Cardassians arrest Miles for a crime that he has no knowledge of.    Attempting to resist, Miles is stunned and kidnapped, leaving Keiko alone.

O’Brien is taken to Cardassia Prime where he is processed by the Cardassian prison guards. Still not understanding why he is there, O’Brien makes every attempt to escape only to find himself trapped. After being processed, a female Cardassian named Makbar arrives informing him that he has been assigned the Venerable Kovat as his conservator.  Asking again why what he is being accused of, she relies that he will find out , all in good time. 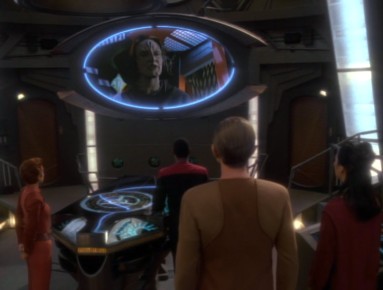 Back at the station, Sisko informs Keiko that several ships, including the Enterprise, have been sent to the border to help do what they can.  As soon as Keiko gets upset, Makbar contacts Ben Sisko to inform him that O’Brien has been arrested and his charges will be announced when the trial begins.  Keiko is informed that her husband is guilty and there is no way to prepare for the trial.   Odo volunteers as Nestor to Miles O’Brien as he is still an officer of the Court.  Makbar reluctantly agrees and both Odo and Keiko head to Cardassia Prime.

Miles is visited by his lawyer who informs the engineer that he is there to prepare him for his guilt.  When Miles asks again what he is being charged with, his lawyer once again tells him that it is not important.  Conservator Kovat informs O’Brien that his conviction will be a positive experience for the populace of Cardassia, keeping peace for all. When Miles asks is his lawyer has ever won a case, the response is, Winning isn’t everything.

Back on the station, the Ops team find an entire weapons locker has been emptied of Photon warheads and it seems that O’Brien was involved. His voice has been recorded indicating that he was in the weapons locker moments before he left the station.  Sisko orders an investigation to see if there have been any Maquis aboard the station. 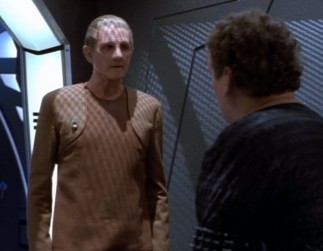 Odo visits Miles in prison and informs the engineer that Keiko is present.  He informs Miles that they believe that the Cardassians are accusing him of supplying weapons to the Maquis. Miles is shocked to hear that the Cardassians found the missing weapons on his runabout when he was arrested.  He tells Odo that he is above reproach and that he would do nothing to harm the Federation or it’s interests. He is determined to prove his innocence even though the odds are stacked against him.  Odo leaves him after telling him that the shapeshifter has his back.

Dax finds that the voice modulation of O’Brien’s voice has been sympathized in order to get into the weapons locker.  They find Boone and go in to question him. However, Boone refuses to cooperate indicating that he has nothing to do with O’Brien’s case.  That evening, Julian Bashir is informed by a man claiming to be from the Maquis, telling the Doctor that Boone is not one of theirs. 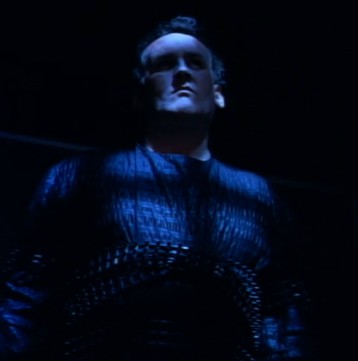 On Cardassia Prime, the trial begins.  O’Brien is led into a dark room where he begins a publicly broadcast trial.  Upon entering, the Judge offers a chance for Keiko to testify against her husband before they begin.  She refuses and Odo informs Mile’s lawyer that there is new evidence that proves the engineer’s innocence.  Odo provides the evidence without permission and causes trouble even making the lawyer ask to be revealed of his assignment.  The Judge does not give in and begins questioning witnesses.

Back on the station, Boone is pulled into the infirmary where they inform him that they believe that they have evidence that he is not who he claims to be. 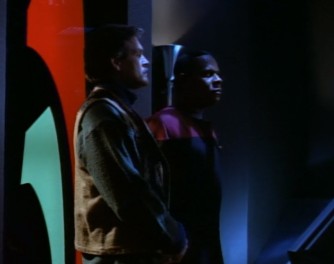 The trial continues with witness testimony incriminating O’Brien at every turn.  When O’Brien is pulled onto the witness stand, his lawyer begins trying to punch holes into Miles’ character.  It is when she asks him how many Cardassians he killed during the war, he begins to show his real feelings toward the Cardassian people.  He admits that he has stated that ‘the bloody Cardies can not be trusted’.  Soon it becomes apparent that the trial is coming to an end when Sisko brings Boone to the court room. Upon seeing Boone,  The judge indicates that O’Brien is to be released for rehabilitation in the spirit to unify Cardassian/Federation relations.  It is clear that they have been caught red handed and must free O’Brien or admit they have the wrong man.

On their way back to the station, Sisko explains that Boone was in fact a Cardassian agent who had been surgically altered to look like his old crew-mate. This was done to frame O’Brien in order to discredit the Federation by showing that the Maquis had once again violated the peace treaty.  After going through all of the torture, Sisko ensures that Miles and his wife get the vacation they deserve. 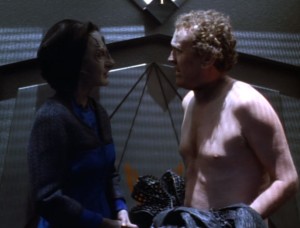 This is the classic example of the ‘Miles Must Suffer’ story that permeates this series.  At every turn the writers do all they can to throw the worst toward Miles making him endure some terrible experiences.  Even as far back as his time on Star Trek TNG he has been made to suffer, but in all of this, it really ends up making him a much more interesting character.

While it is technically a ‘throw-away’ episode it does establish a few things in the span of the story. For one, this shows that the Cardassians, although at peace with the Federation, are still trying to find a way to break away from their treaty and remove the Federation settlers from their side of the DMZ.   This stalemate will continue until an outside force arrives but that is for later.  Trust me, this series gets real, fast.

Additionally, this is the first time it has been shown that Cardassian sleeper agents that have been surgically altered exist and that this is not an uncommon practice.  In fact, this very plot line will be explored many more times and would even been a key point in the next series, Star Trek Voyager.

Of note, this is the very first episode directed by Ben Sisko himself, Avery Brooks.

We also get to see just how dedicated an engineer Miles is, even taking technical manuals with him on his vacation.  Much like Scotty, Miles is an engineer  even in his down time!

We also get a chance to see Odo stand up for one of his fellow crewman using his time working with the Cardassians to his advantage.   Odo is a sly one for sure.

This is the first appearance of Cardassia Prime on the screen, a place we will see again in the future.

Thanks for reading the Retro TV Review,  I look forward to discussing the rest of the series with you, one episode at a time every Monday, Wednesday and Friday!  Next Review: The Jem’Hadar