The James Bond series was a monumental series for me growing up and, as I planned on featuring one of the 20+ films in the series as a Key Movie, I just couldn’t choose.  Since I can’t choose a single one, I am reviewing each and every Bond film continuing with today’s entry, Quantum of Solace.

Still suffering from the death of Vesper Lynd, James Bond has Mr. White, a man who could lead MI-6 to a criminal organization known as Quantum, in custody.  After seeing that Bond is too close to the case, M takes 007 off of the assignment only for the Agent to go rogue in order to find and end Quantum.

Hot off the heals of the incredible Casino Royale, the Bond franchise did something that it has never done before, create a direct sequel to it’s previous entry. Not only is it a direct sequel, but it literally start minutes after the previous entry ends.   Yet again playing off of the rogue agent theme, this is one that finally does it right.  Bond does not get the unwavering assistance afforded him by MI-6 that he got in the previous films, no, this time in fact even they try to kill him.  So, it’s Bond against Quantum against MI-6 in one of the most violent and intense entries to date.  This is Quantum of Solace.

To start off, while it is a pretty killer action film, this is not a good entry point film to the Bond Franchise.  Unlike the majority of this franchise, this is one of the few that you really need to know what happened in Casino Royale before even considering watching it.

Quantum takes the place of Spectre in this film as, at the time the rights to the latter villainous group were tied up in litigation.  It was not until the film SPECTRE itself that the franchise has it’s villainous organization back and they were determined to make it a big deal.  We will talk about that film later. 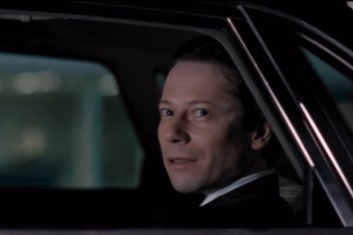 While the true main villain in this one is the organization known as Quantum, the character Bond peruses is a man known as Dominic Greene (Mathieu Amalric).  Coming off the fascinating dark villain portrayal of Mads Mikkelsen in Casino Royale, it was expected that the sequel would up the anti and give us something or someone far more sinister.  Unfortunately Greene is an odd duck, coming across as a strange sadistic day manager at a seven-eleven with delusions of grandeur as he sneers at his underlings knowing that he will never be at the corporate office. As Den Of Geek states, ‘he’s so lame that Bond doesn’t even bother finishing him off: he abandons him in a desert to be terminated by his presumably more competent employers.’ 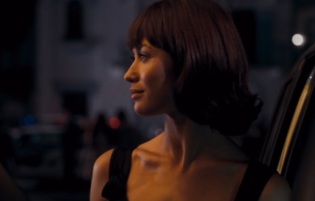 As with every film that has come before it, this one has it’s Bond Girl this time in the form of Camille Montes, played by Olga Kurylenko.  While she is not in the film for much, she too has a vendetta to settle that, of course, Greene exploits.  While her time in the film is sadly limited, when she finally gets some screen time Camille Montes ends up being a fairly interesting character.   Also on a vendetta of her own, she and Bond team up to both dole out justice on their own targets who just happen to be working together. As tough and clever as Bond ever was, Camille is one of the rarer Bond Girls who holds her own in the film.  She has no qualms about facing tough odds which is a good thing as most of Bond’s companions tend to have very short lives. 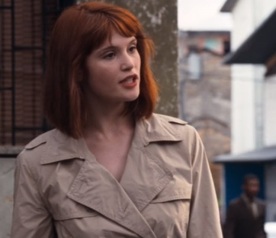 This film also brings back a rather disappointing tradition of naming Bond’s love interests with silly pun filled names that I thought had finally been benched with the reboot.  This time, we are introduced to Strawberry Fields (Gemma Arterton) who’s parents were clearly Beatles fans.  Bond, of course, wastes no time seducing her even though she was sent by MI-6 to bring him back from his rogue mission for revenge.  Of course she berates herself for falling for his well known tactics but, like many of the past women in Bond’s life, she doesn’t have long to feel bad about it. 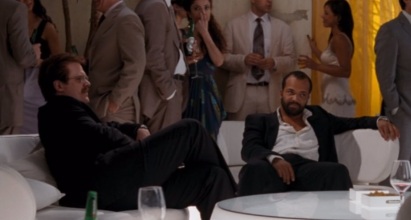 I was delighted to see the return of Felix Leiter to the series with his brief but cool appearance in Casino Royale.  Leiter has always been Bonds closest ally in the CIA and, for some reason, I have always enjoyed when his character appears in the Bond adventures.  Even though he is in it only for a short time, Jeffery Wright once again shows that he is the best in the role so far. Additionally, As I watched it again for this review I was shocked to recognize David Harbor early in the film in the role of a CIA agent working with Felix Leiter.  Sporting a cheesy mustache,  he is one of the lesser villains of the movie playing it up as a US agent striking up a deal with our films main villain to secure oil rights in Bolivia. 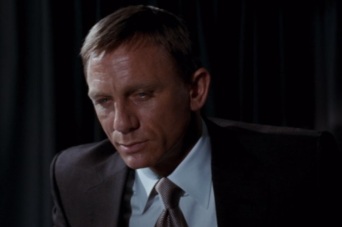 Bond himself is a little more broody than we have seen in the previous films.  Although he claims to not want revenge for the death of Vesper, it is clear he is a man in pain who wants nothing but revenge.  It is a theme that is mentioned time after time, reminding the viewers that this is a wounded Bond, one that, like a hurt dog, might bite the very hands that feed him.  Personally, I love Craig’s portrayal of Bond in all of his films as he gives the character much more depth than ever before.  By the end of the film he is, of course, closer to the Bond we have come to know in the past but not by much.

The theme song in this one is one that is interesting and shouldn’t work but somehow does. Performed by the unlikely duet of Jack White and Alicia Keys.  Somehow, this duet works and the song itself is a very strong entry into the Bond Library.

The film itself is probably the weakest in the Daniel Craig era of Bond films but it is certainly not the worst in the franchise itself.  As I indicated earlier, it is best viewed as a continuation to Casino Royale itself that as a stand alone adventure as many of the threads in Craig’s first adventure are mostly resolved in this one.  That being said, it is still an action packed adventure but one that comes at a slightly slower pace.

You can grab this one pretty cheap here for around $6.  Or the set called The Daniel Craig Collection that has all four of his films so far.  Be sure to watch this after Casino Royale, you will thank me later.

Of course, the trailer: