The Klingons.  A noble, honorable and savage people whose culture, until this series, went greatly unexplored.  This is one of the episodes that really shows more of this interesting people and how one of their ships crew operates. So now we present, an episode that originally aired on Feb 6,1989, A Matter of Honor.

Engaging in an officer exchange program, Riker is assigned to serve aboard a Klingon Vessel. Meanwhile the Enterprise gets some new replacement crew, some of which are more of a problem than they are worth.

There are two stories in this episode, one dealing with Riker on the Klingon Vessel the IKS Pagh (the ‘A’ story) and the other dealing with the a new Benzite crewman named Ensign Mendon. (The ‘B’ Story) They both intersect at times but it is easier to tell them separately.  We will start with the ‘B’ story.

The B story: Crewman Mendon’s journey. 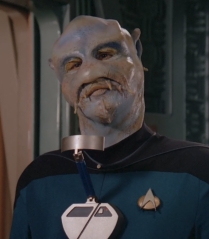 As the new replacement crew arrives on board, Wesley is surprised to see his old friend Mordock.  Upon approaching him, he learns that this is not Mordock but another Benzite from the same geostructure called Mendon.   Mendon is part of the exchange program as well and is there to prove himself to Picard.  While aboard, Mendon, following his species protocol scans and discovered a hull eating particle and does not reveal it until he has ‘fully scanned it’.   This mistake leads to some unfortunate misunderstandings that we will see in the ‘A’ story.

The ‘A’ Story Riker’s Assignment:

Upon arriving on the Pagh, Riker is sized up by the Klingons.   The Captain of the Pagh challenges Riker’s loyalty immediately upon their introduction and, after being jumped by the second in command,Klang, Riker beats Klang down in order to gain their respect. 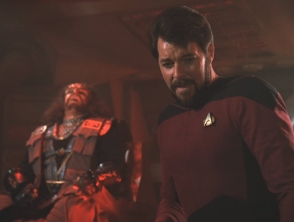 After the initial hazing and Riker showing his appreciation for Klingon cuisine, His fellow crewman note that he is not what they expected in a human. H has a sense of humor and that, he will learn, that they are not what he expects either.  He learns that most Klingons do not reach old age as it is considered a dishonorable fate to not die in battle. To a Klingon, work comes first in all things.  Riker impresses on them that change is possible as he, a human, has learned to eat their rather unique cuisine. 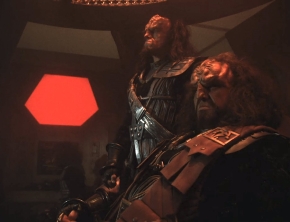 The Klingons soon discover that there is a strange damage to the hull and that in 8 hours the ship will become compromised.  They believe that the Enterprise has attacked them when the Enterprise scanned the Klingon ship earlier (thank you Mendon) and used a new weapon to destroy their ship.  In retaliation, The Captain of the Pagh informs Riker that they will attack the Enterprise and destroy it.

When the Enterprise returns, Kargan commands Riker to assist in destroying the Enterprise by revealing the ship’s secrets, Riker refuses.   Kargan is impressed with Riker’s sense of duty and,for some reason, now trusts Riker will die with them in battle against the Enterprise.

Although the description probably came across as boring, the episode itself was fantastic.  We got to learn about not one, but two species that were otherwise unexplored.   Through Mendon’s journey, we get to see view the Enterprise through the eyes of an alien, and sometimes that view can be frightening.

On the flip side we get to get an intimate look into the Klingons through the eyes of Riker.  Riker’s journey not only gave us the operational side of the Klingon Warship but also we learned of the cultural significance of the Klingon Way.   This episode really does a great job setting these people as the Samurai of the Star Trek Universe and they are all the better for it.

Klingon Culture has always fascinated me and I found myself loving their look and their ways.   I even attempted to learn some of their language in my youth to little result.   I hope to someday own a proper bat’leth of my own one day but I have yet to find the right one.

I do recommend a couple of books for those interested in Klingon Culture.

The Klingon Way A guide on the Warrior culture of the Klingon People.

Conversational Klingon An audiobook that will teach you many useful words while visiting Qo’nos.

The Klingon Art of War  A translation of Kahless the Unforgettable’s words and teachings.

Riker (of the bearded variety) gets to be the first Federation Officer to officially serve aboard a Klingon vessel. Clean shaven Riker would never have been so bold.

The first duty of a Klingon First Officer is to assassinate his Captain, as to die in battle is the only honorable way to die.

We get to see the holodeck used for something other than recreation again,  this time as a target practice range.

Mendon is a bit pompous but that is a typical trait of his species, the Benzite.

Klingons have an appreciation for a sense of humor, although their humor is quite violent as well.

Riker passes up on a chance to visit with a Klingon woman.  I bet had he been on board longer things would have been different…

We also get a little more of Riker and Worf’s burgeoning friendship.

Thanks for reading the Retro TV Review,  I look forward to discussing the rest of the series with you, one episode at a time every Monday, Wednesday and Friday!  Next Review: The Measure Of A Man