After that last one, anything would be better huh?   Okay how about an I.T. problem aboard the Enterprise?   Just kidding,  how about an alien virus that threatens the ship itself?   Sounds good?  Okay then, Originally airing on March 20, 1989, this is Contagion.

The Enterprise rendezvous with their sister ship the USS Yamato only to watch it explode before them from unknown reasons.  Soon, the Romulans arrive and my be the very ones at fault. 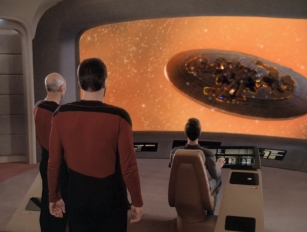 It is soon discovered that the Yamato was destroyed by a breach in the engine that should not have been possible and could have been caused by a design flaw.  Fearing this flaw may affect the Enterprise, Picard commands Geordi to investigate and chooses to remain in the vicinity of the Romulans until the flaw can be discovered and repaired.

Picard soon discovers that the ship may have been infected by an ancient Iconian probe that the Captain of the Yamato had discovered using an ancient artifact.  He finds a probe around a planet that had scanned the ship and attempts to follow the path the Yamato took to see if he can determine why the crew perished.

Upon approaching the planet a probe is launched toward the ship and Picard informs Geordi that they will be attempting to capture it.  Realizing the threat, Geordi rushes to the bridge in an attempt to stop them only to be thrown about by a rogue turbolift.   The alien program has contaminated the Enterprise when they downloaded the Yamato’s log and they are now in a race against time to prevent facing the same fate as their sister ship.  In essence, it is now the Crew versus the Enterprise herself.

Picard, despite Riker’s disputes, beams down with an away team to the Iconian Planet.  On the planet, the away team explore the Iconian ruins only to discover an ancient computer system. After Data translates the language, the system creates a gateway to other planets, showing various places the Iconians could have fled to.  As data works on the console, it hits him with a strange power and he is damaged by the program. Jumping through the portal, Worf and Data return to the ship to save Data.  Although, Data appears to die, his system purges the bad data and he re-emerges intact.   Geordi realizes that this is the solution to the problem,  Literally turning the ship off and on again.

It is far far better than the last one for sure.  Making the Enterprise the threat due to a computer virus is a bit clever but also pretty obvious.  We do get to see more of the Romulans so that is good.   Otherwise, it’s just an okay episode that makes good filler.

We get some decent character development for Wesley as he asks how Picard and the bridge crew can compartmentalize the deaths of the Yamato Crew.  We also get some good moments with Geordi as he saves the ship from being scanned by the probe.

Besides that, Nothing left to see here, carry on.

The Iconians are mentioned again on Deep Space Nine and Worf refers to this incident.

This marks the very first time Picard orders Tea, Earl Grey, Hot. Sadly, he doesn’t get what he asks for.

I found it interesting that when the Romulan ship is threatening the Enterprise, Riker seems to have no issue with Wesley Crusher being the one trying to raise the shields.  It seemed a little inappropriate for a kid who isn’t really an officer to be in charge of such an important task.

Thanks for reading the Retro TV Review,  I look forward to discussing the rest of the series with you, one episode at a time every Monday, Wednesday and Friday!  Next Review: The Royale