Survivors Guilt, by definition it is a mental condition that occurs when that person believes they have done something wrong after surviving a traumatic event when others parrished. How, then, would this affect an immortal being?

Originally airing on  October 9,1989, this is The Survivors.

The Enterprise responds to a distress call from a colony who claims they were being attacked by an unknown starship.  Upon arrival they find the entire colony devastated save for a house and two people who seem unaffected.

Riker and away team beam down to the house to determine how these people have survived.   They are greeted by an elderly couple, Kevin and Rishon Uxbridge, who tell them that a large ship appeared out of the sky, obliterated the colony and left.  They claim that they were not aware that they were the only survivors and this troubles Riker.   He asks to go inside to help determine why they were the only ones spared.  In their investigations, Data shows interest in a music box and Rishon indicates that it has been in their family for many years. Meanwhile, on board the Enterprise, Troi begins hearing the song from the music box, blocking her telepathic abilities. Riker asks the couple to leave with them and they refuse, even though they can not care for themselves in the current situation.

Troi continues to have her abilities blocked by the music and it begins to drive her insane.  All she can hear is the music and she finds that she can not take much more of it.   Although it is making things difficult, she attempts to hide her problems from the crew and Picard gets her to confide in him.  As they discuss the matter the starship that destroyed the colony returns and Worf can not explain how he missed his scans for it.

The ship attacks and will not return the Enterprises Hails.   The Enterprise returns attack causing the ship to flee.  They pursue and can not seem to catch up no matter how fast they go. Picard realizes that this appears to be an attempt to get them away from the planet and it is not really the attack it seems to be. 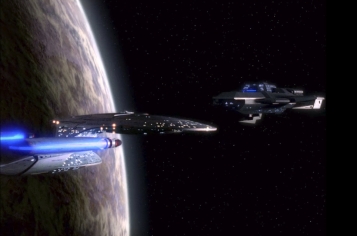 Returning to the planet, Picard and Worf beam down with supplies for the couple.  Kevin Uxbridge refuses the gift but his wife insists that they do need the help.  Meanwhile, Troi is being bombarded with the music in her head.  She can not hear anything else and it seems to be increasing in intensity.  Doctor Crusher attempts to help but to no avail.

Picard continues talking to the Uxbridges and they remain aloof.  Kevin insists that they leave and, As soon as they return, to the ship the enemy warship returns and, this time, it proposes a real threat.  Picard determines that the Starship and the music in Troi’s head are both the machinations of Kevin and Rishon.  Somehow they are causing this and Picard is determined to discover the truth.

Picard informs the couple that the ship has returned and that the Enterprise will remain to protect them. The ship returns and destroys the Uxbridges home.  The Enterprise then destroys the enemy ship with ease and Picard order’s the ship into high orbit. After a few hours, the house and the couple reappear as Picard expected. Picard instantly beams both Rishon and Kevin aboard the ship to prove his point. He soon discovers that all this time Kevin has been the only survivor of the war that ravaged the planet.  Kevin reliqueshes and reveals that Rishon is indeed dead having not survived the attack on the planet.  Kevin turns out to be a Douwd, an immortal being who fell in love with Rishon and gave up his powers to be with her.  The colony was destroyed by the Husnock and, being a pacifist, refused to fight against them using his powers.  Rishon was killed and Kevin was left alone.  In his anger, he obliterated the entire Husnock race and now lives with that guilt.

After Kevin heals Troi, Picard allows Kevin to return to the planet to live out his grief with the memory of Rishon.

This episode is a beautiful blend of Star Trek and The Twilight Zone, telling a story of guilt and regret. This indicates that the writers this season seem to be willing to branch out and explore more than just Strange New Worlds.  To me, that is really cool.   To have a generic alien threat of the week format can get monotonous and boring so any change in this is a good thing in my book.

There isn’t much in the vein of character development for the main crew in this one but, in this case, it really isn’t needed.  You see, they have had two full seasons to establish the characters and episodes like this allow the viewers to enjoy the fruits of that labor.  That being said too many episodes that don’t give the characters more background and all you have is fluff.  So this is a very delicate dance and so far, the writers really know the steps perfectly.

This is the first and last time we hear about the Husnock.  Since they were all killed so yeah…

We never see The Douwd again but man is this galaxy filled with omnipotent beings or what?  Q, Trelane (original series), Armus, Nagilum, just to name a few.  If this is even partially true we are boned!

We see Doctor Crusher without her medical coat, something we don’t see very often…

…on the other hand Troi really doesn’t seem to like wearing her uniform.

Thanks for reading the Retro TV Review,  I look forward to discussing the rest of the series with you, one episode at a time every Monday, Wednesday and Friday!  Next Review: Who Watches the Watchers