The Chief Engineer.  This is the person who must know the ship inside and out to be ready for any circumstance that may arise.  Known as miracle workers, the lasting Chief Engineers of the Enterprise have always been the best of the best and Geordi is no different.  Originally airing on October 30,1989, this is a key event in Geordi’s path to greatness, this is Booby Trap.

The Enterprise discovers an ancient derelict ship in an asteroid belt only to become caught in the very same trap that doomed the ancient ship centuries ago.  Now the Enterprise must find a way out before it is too late. 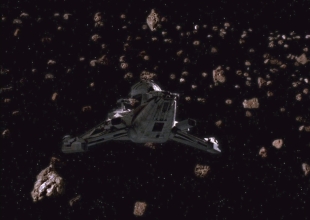 Upon discovering an ancient Promellian Battlecruiser Picard insists that he be allowed to lead the away mission despite Riker’s protests.  Picard sees no threat in the ancient vessel and wants to see this relic with his own eyes.

As they explore the ship they soon discover a recording of the ship’s Captain reporting that he, the captain, is responsible for the death of crew.  He indicates that the crew acted admirably in the end and he alone should be held responsible for their fate. Picard acknowledges that they have found what they needed and returns to the ship.  As they attempt to leave, the ship begins to lose energy at an alarming rate.  They are soon unable to leave and Picard realizes that they too have fallen into a thousand year old booby trap.

Data and Riker return to the derelict to find more information about the trap while Geordi attempts to free the Enterprise from the trap. Investigating the problem with the engines, Geordi discovers the logs of one of the Enterprise’s designers, One Doctor Leah Brahms.   He calls up her files and begins using the data provided to get to work.  Discovering he needs more, he finds a holodeck program that depicts the drafting room where the Enterprise was built.  He activates the program and begins work with a holographic version of Doctor Brahms.

As Geordi dives deeper into the work, he realizes that the holographic recreation of Doctor Brahms isn’t very interactive and asks the computer to synthesize a more realistic facsimile of Leah Brahms.  The computer does and they begin to work.  Geordi is taken aback by how real she has become and soon discovers that she is almost too real.

Data and Riker find additional logs from the ancient crew and begins an analysis hoping for insight into the situation. They soon discover the cause of the trap, there is a radiation field that has been planted using devices throughout the asteroid belt which is draining the ship of its energy. They discover that attempting to destroy them may indeed feed the mines the very energy they need to operate.  Despite this, they make the attempt only to cause more damage.  The booby trap drains all energy from the ship no matter what they do,  like a chinese finger trap the more they struggle the worse it gets so they need to find a way to move without activating the traps.

The energy reserves deplete to a point of no return and shuts down the hologram.  Geordi gets permission from Picard to reinstate it, knowing that it is vital to their survival.   He returns and finds the solution but it will not be possible unless they turn the control of the ship over to the computer.  He informs Picard and the Captain is unsure about letting the computer take command of his ship while the crew sits back and allows this to happen.

Coming up with a new unique solution outside of the computer, Geordi finds a way to save the ship and it’s crew.   Picard takes the conn and initiates Geordi’s plan, taking responsibility in his own hands.

Navigating the debris field by hand and using only the momentum of the ship, Picard manages to pilot his way through a relatively no-win situation.  The crew is saved and, in order to prevent any further ships being trapped they are forced to destroy the ancient ship.

This is a solid entry in the series and really showcases Geordi and his ability as the Chief Engineer of the Enterprise.   Using everything at his disposal, he finds a way to save the ship and it’s crew. The man will not take impossible as an answer when it come to fulfilling his duty and he is all the better for it. We get to see more of this ability over the course of the series, cementing him in as one of Star Trek’s greatest engineers.  He also gets a chance to meet one of the other greats but we are seriously getting ahead of ourselves here…

We also get a deeper look at Geordi’s love life as the B story in this deals with this. After having a terribly unsuccessful date with fellow crewman Christy Henshaw, Geordi laments his lack of romantic entanglement.  This will later lead him to fall in love with the hologram he inadvertently created of Leah Brahms, something that will cause him a bit of embarrassment later in the series when he meets the REAL Leah Brahms…

This episode also gives some great character building for Picard as it reinforces his love for archeology and anthropology.   The Derelict ship is too much of a temptation to resist and, that passion inadvertently gets the ship trapped. I’m sure Riker wanted to tell him, I told you so, when Picard refused to allow him to make security sweeps prior to his boarding the vessel.   Had they scanned the area prior to

We see that Three-Dimensional chess is still being played after first being seen on Star Trek the Original Series. Data and Wesley plays it and, of course, it seems that Data is the victor.

We learn that both Picard and O’brien built ships in bottles as children when Picard references it as he beams aboard the derelict.  Riker obviously thought O’Brien was brown nosing…

This marks the first appearance of Leah Brahms (sorta) and she would return in the flesh in a later episode.

In a conversation it is revealed that Starship designers rarely get a chance to go into space on the ships they design while Chief Engineers are rarely present during the designing of the very ships they must know everything about. It seems that Starfleet has some issues it needs to figure out…

Guinan reveals that she is attracted to Bald Men because a bald man took care of her once when she was hurting.  This will come into play later down the road…trust me.

Thanks for reading the Retro TV Review,  I look forward to discussing the rest of the series with you, one episode at a time every Monday, Wednesday and Friday!  Next Review: The Enemy