The Holodeck. One of the most fascinating and troublesome inventions that has ever graced the scifi screen.  From creating sentient enemies to even being responsible for horrible additions, this is one device that I am shock has not been banned from Federation ships with how much trouble they cause.

As the tradition started with TNG, DS9 could not be without it’s share of holodeck incidents.  originally airing on November 27, 1995, this is Our Man Bashir.

After a transporter malfunction replaces characters in Julian’s holosuite program with the physical forms of the station’s senior staff, Bashir must find a way to keep everyone alive and not end the program before they can be saved. 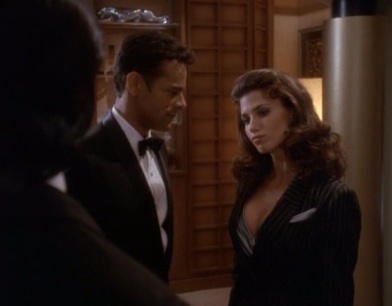 We open with Julian in the middle of a James Bond style adventure, just as he is about to close the deal with his conquest, he is interrupted by his old friend, plain simple Garak. Upset at the interruption, Julian makes it clear that he does not want the Cardassian Tailor in the holosuite with him and is even more upset when his friend makes it clear he has no intention on leaving.

Returning to Bashir’s hologram suite, the two are greeted by Mona Luvsitt, his personal valet.  Garak is shocked to learn that Bashir is portraying a British spy, not quite understanding how he could do the job while also living so lavishly.

As Julian and Garak play spy, a runabout with the senior staff arrives at the station and begins having difficulties.  Just as they are beamed to the station by Eddington, the shuttle explodes causing their transporter patterns to be trapped in the system.  In order to save the crew, Eddington saves the transporter patterns in the stations memory with Odo’s help.  Seconds later, a certain Major Kira appears in the holosuite program seemingly unaware of her real identity.

Identifying herself at Colonel Anastasia Komananov, Bashir is convinced that this is a rouse. After contacting Ops, Bashir soon discovers that, due to the issues with the transport, the patterns of his fellow crew-members are now part of his spy program. Odo and Eddington inform him that he can not leave the holosuite or they may lose their friends forever.

Things become even more complicated when O’Brien shows up in the form of Bashir’s enemy, one Falcon.  Using a kiss as a distraction, Komananov and Bashir manage to disable Falcon and his men. Garak soon points out that the holodeck safeties are off and that there is every chance that they may not be able to save everyone. They soon learn that they must save a woman named Honey Bare who happens to look just like Jadzia Dax. 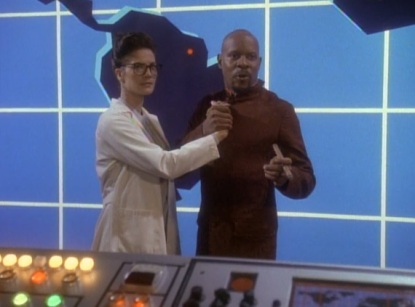 While Julian, Garak and Kira-manov continue their adventure, Eddington works with Quark and Rom to locate the crew-members in the holosuite programs.  Finding them, Eddington discovers that while their physical forms are in the holosuite, their mental data is being stored throughout the ship.  They must find a way to reunite the two or risk losing them all forever. Before long, Julian and Garak encounter the remainder of the crew with Worf portraying a man named Duchamps and Sisko in the form of the villain of the story Doctor Noah.

After revealing his plan for world domination, Doctor Noah (Sisko) traps both Julian and Garak with the laser that is set to start an earthquake of biblical proportions. They are soon saved by Honey Bare who falls for Julian’s Bond like charms.   After making their escape they, of course, confront Noah only to be saved when Eddington and team manage to finally rescue the crew.

I was actually dreading this one as I remembered it being one of the worst in the season.  While it certainly isn’t the worst in the series, it is definitely a filler episode that only serves for a moment of repast as the series nears it’s more serious episodes. Additionally, I do appreciate how episodes like this allows the actors to stretch a little beyond their regular roles on the series.

While fun, one aspect of this episode that pays off is the deeper exploration of Elam Garak’s background and Julian’s desire to be a hero.  Garak finds Julian’s fantasy spy world to be a ridiculous parody of the real thing, constantly challenging Julian to act like a real spy and allow one or more of his crew-members to die.  It is only when Garak threatens the lives of his friends by ending the holodeck program that Julian shows Garak his true resolve by shooting the Cardassian tailor.  This single event allows both Garak and Julian to realize that the Doctor is more of a hero than either ever believed.

The big standout in this one is  Avery Brooks. Brooks makes for an amazing villain channeling his dark insanity in the form of Doctor Noah.   It is rare to see him get a chance to explore his true range and this one really lets him pull it off.

Thanks for reading the Retro TV Review,  I look forward to discussing the rest of the series with you, one episode at a time every Monday, Wednesday and Friday!  Next Review: Homefront