We are officially halfway through season three and Q returns! (gee…couldn’t tell that by the title huh?) Only this time he doesn’t quite have the swagger he once did.  Originally airing on February 5, 1990, this is Deja Q.

Stripped of his powers and seeking asylum aboard the USS Enterprise after being thrown out of the Q-continuum, Q returns to the series for another adventure.

The Enterprise is attempting to prevent a moon from crashing into the planet Bre’el IV when suddenly Q appears on the bridge literally tumbling naked from mid-air. Picard immediately suspects that Q is responsible for Bre’el IV’s moon.  Insisting he is not, he reveals that he has been removed from the Q-continuum and chose to become human and live out his days on the Enterprise in exile.  He is now mortal and felt that Picard is the closest thing he has to a friend in the universe.   Picard obviously doesn’t believe him and sends him to the brig.

As Riker and Picard work on the moon issues a bright light scans the ship and enters Q’s cell, merging with his body.   Picard visits him to ask him about the situation and Q is clueless about what is happening.   As they talk, Q offers to assist in the mission to restore the moon to its rightful place but insists that he can not use any powers.   Picard assigns Data as his escort and  asks Data to take him to engineering to assist Geordi.

While there, Q experiences back pain for the first time and suggest to Geordi that he change the gravitational constant of the universe to fix their problem.  Doctor Crusher arrives and, while she is helping relieve Q’s back pain, Geordi thinks he has found a way to move the moon.  Soon Q discovers that he is hungry, something he has also yet to experience, and he goes with Data to Ten-forward to eat.   Not long after, Guinan appears and confronts Q.  She talks with Data about the situation and stabs Q in the hand with a fork to prove he is indeed mortal. 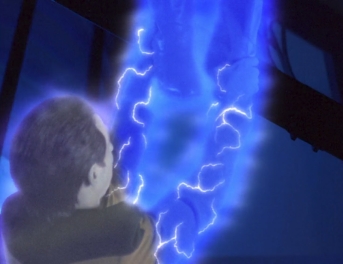 Suddenly another entity arrives and attacks Q with some sort of energy weapon.  Guinan identifies them as the Calamarain.  Picard meets with Q and Q admits that he asked for asylum aboard the Enterprise for protection.  Riker and Picard suggest that they drop him off on a starbase but Data suggests that Q may still be useful with the knowledge he has.  After returning to engineering to assist in the issue with the moon, Q is attacked again and Data saves him resulting in Data getting electrocuted.

As Data is being repaired in by Geordi and Dr. Crusher sickbay, Picard explains to Q that Data acted selflessly in his attempt to save Q.  Q realizes that he could have died and begins to realize that he is indeed a selfish person who doesn’t have what it takes to actually be human.  He visits Data one last time and tells Data that Data is a better human than Q could ever be as he is a selfless person.  Q then goes to the shuttlebay and steals a shuttlecraft with the intent to sacrifice himself to the Calamarain.  Picard, against his better judgement, tries in vain to save Q but can not save him.

On board the shuttle, Q2 appears and tells him that he has been watching Q and noticed that Q has committed a selfless act.  This act forces Q2 to give Q his powers back, even through Q2 really doesn’t want to.

Watching the shuttle and the aliens disappear, Picard assumes Q is dead until Q appears on the bridge with a full mariachi band.  Picard chastises him, demanding that he has no reason to celebrate.  Before Q leaves, he gives Data a going away present.  He allows Data to laugh uncontrollably for a few moments giving Data a chance to feel a ‘wonderful feeling’.   Bre’el VI then contacts the Enterprise telling them that the moon has returned to it’s normal orbit.   Apparently Q has been more of an assistance than Picard would like to admit.

To me, this is one of the very best Q episodes in the series.  Allowing us even more character development for Q, and in turn Data, in a story where we get to see the human side of Q a side that quite frankly scares him.  Data also gets a real chance to explore his humanity through a person who doesn’t appreciate the very thing Data has desired his entire existence. The sub story about the moon threatening the planet is very much just set dressing to a phenomenal tale of an omnipotent being who becomes a man for a day.

De Lancie dominates the screen in this episode as Q really showcasing what a terrific actor he really is. It is a shame he hasn’t had a longer time in a tv series of his own.

With so many great lines and great moments, while not a serious episode, this episode represents Star Trek at it’s funnest and sometimes, that is all you need.

De Lancie is one of the Star Trek actors whom I would love to meet one day.  His clever sense of humor and incredible timing makes him an icon to this Trekkie.

One of my favorite lines is in this episode as well.

When Q asks Picard how he can ‘prove that he is human’. Worf suggests that he could ‘die’.  In response, Q says ‘Oh very clever Worf, eat any good books lately?’

We get to see more of the rivalry between Guinan and Q.  This is something that is never really fully explored on screen and that is a shame.  I would have loved to get deeper into that story. 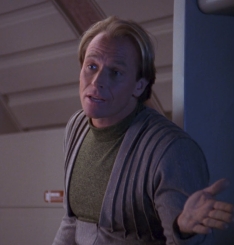 This is the very first time we see another member of the Q-continuum.  We see more later on just not until Star Trek Voyager…sorry.

Q2 is played by none other than Corbin Bernsen in an uncredited role, you might recognize him from the tv series Psych.

We never see or hear from the people of Bre’el again but their makeup is unforgettable.

Thanks for reading the Retro TV Review,  I look forward to discussing the rest of the series with you, one episode at a time every Monday, Wednesday and Friday!  Next Review: A Matter of Perspective