Key Movies Of My Life: The Muppets Take Manhattan (1985)

The Muppets were one of my favorite things growing up. From the beginning, I was enthralled with the adventure of Kermit the Frog and his crazy band of frogs and bears and chickens and things.

After a successful run in a college production of Manhattan Melodies, Kermit and crew attempt to take their play to Broadway in order to make it big (and so Piggy can finally get married).

Filled with timeless songs and an all-star cast, this is one of the most iconic Muppet films of it’s time. 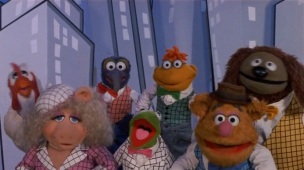 As I said before, the Muppets were one of my very favorite things as a kid. From their early appearances on Sesame Street to the Muppet Show itself, I would absorb everything Muppet and Muppet related I could get my eyes on. At some point I managed to see The Muppet Movie and the Great Muppet Caper but it was The Muppets Take Manhattan that really sealed my love for the insane unlikely group of friends.

I vividly remember begging to go see this one in theaters and being surprised to get a chance to see this film on the big screen. It was everything I could imagine.

This is arguably the finest Muppet film of them all. Setup as somewhat of a prequel to the Muppet Show itself, while The Muppet Movie was how they all met, this is the story of how they made it to NYC and eventually ended up with their theater in the original series. Interestingly enough, this movie also served as the origin of the Muppet Babies which would end up being one of my very favorite cartoon series. 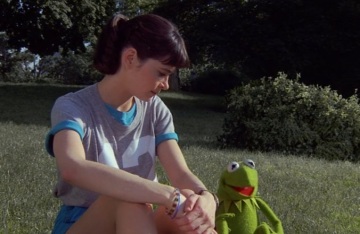 The magic of the classic Muppet films is that, not once do Kermit or his friends feel like they are being projected into the real world, but actually feel alive and convincing in every scene. Jim Henson, Frank Oz and the rest of the gang somehow give these cloth beings life making them as real as the human actors who interact with them.

In addition to the impressive and convincing effects, the music is one aspect that really sets this film apart. With already establishing some of the best music in The Muppet Movie, it was hard pressed to meet let alone exceed the standards set by that film. While nothing is more iconic than The Rainbow Connection, this film has as many great and iconic songs that will have you singing along in no time. Together Again and Right Where I Belong are two songs that will forever give me that warm fuzzy feeling every time I hear it.

Even now, 35 years later, the films special effects, musical numbers and cast hold up in every way. As with every Muppet film, this one has a plethora of cameo’s from some of the best including Joan Rivers, Gregory Hines, Dabney Coleman, Art Carney, Elliot Gould, Liza Minnelli, Brooke Shields, John Landis, and even Gates McFadden in her first motion picture acting role.

You can pick this one up pretty cheap these days for as low as $2. You can also find it on pretty much any digital format that exists. While many more Muppet films have been made since, this one is one of the last films that involved Jim Henson himself. Interestingly enough, this is also the last Muppet films to include the cast of Sesame Street.