Faith and Duty are tested for Ben Sisko in the episode that originally aired on December 30, 1996.  This is Rapture.

Station Log Stardate Undetermined (We’re going to get a lot more of that this season. Unknown Stardates and all.) Rapture

As Bajor is about to Officially enter the Federation, Ben Sisko finds the ruins of an ancient lost city on Bajor. Sisko soon discovers that he must make a choice between life and faith.

After recovering an ancient Bajoran painting from the Cardassians, Sisko is intrigued by it’s depiction of the Lost city of B’hala.  Using the Holosuites as a way to explore the painting further, Captain Sisko is soon knocked unconscious by a station malfunction.

Waking up in the Infirmary, Ben finds that everything seems brighter and more vivid than before but Julian claims that this side effect is to be expected.  After being placed on light duty, Ben takes some time off and is treated to a home made dinner by his son Jake. At dinner, Ben is reminded that Kasidy Yates is returning to the station after being gone for six months.   It is clear that Ben is not paying attention as he finds himself creating Bajoran shapes with his food. 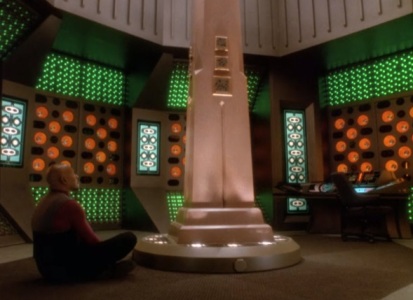 While working on the mystery of B’hala, Ben is contacted by Admiral Whately who informs him that Bajor has been approved for admission into the Federation. DS9 will soon be visited by top brass for the signing ceremony.

In the bar, Quark is very pleased with the latest news.  He and the rest of the crew are excited at the prospect of Bajor officially joining the Federation, specifically Major Kira. Noticing that Ben Sisko is not present, Kira heads to the holosuite to find her commanding officer in a trance staring at the monolith form the painting.  Awakening to her plea’s, Sisko tells Kira that he was there at B’hala and begins to describe what he saw there.  For just a moment he saw the path of Bajor past present and future but, now that he is awake, his vision has faded quickly.  Just as they begin discussing the obelisk, O’Brien informs them that Kai Winn is planning a visit to the station.

Meeting Kai Winn at the airlock, Kira informs the Kai that Sisko is busy at the moment.  Winn is disappointed to not be greeted by the Captain but immediately launches into her tirade into why Bajor should not become a member of the Federation.

Ben continues his mission only to be greeted by Kasidy Yates who he greets with a passionate kiss. Ben tells Kasidy that he thinks he knows where to find B’hala and wants Kasidy to join him on his personal mission to Bajor.  She is delighted that he kept her quarters intact on the station and agrees to journey with him to where he believes he will find the ancient city. Beaming into a series of caves, Ben and Kasidy begin their exploration when Ben is struck with a headache.  Kasidy is concerned but Ben presses on.  Soon they find themselves in front of the ancient city buried under 20 thousand years of sediment.

As Worf and Odo squabble about Federation room assignments, Kira is dumbfounded that Sisko found B’hala in a matter of days when scholars and archaeologists couldn’t find it in centuries.  She is soon asked by Kai Winn if the Emissary will forgive her for doubting his providence as The Emissary.  Now that Sisko has found B’hala, Winn is convinced that she needs to follow the path the Emissary lays out for them.

Down on Bajor, Sisko is greeted by Admiral Whatley who is more than impressed with Sisko’s find.  Whatley is concerned about Sisko and his absence on the station seeing that there are a lot of important people visiting due to Bajor joining the Federation.  Sisko assures Whatley that he will not let the Federation down but asks the Admiral for more time in the ruins of B’hala.

Back on the station, Whatley visits Julian and expresses his concern over the Captain’s new outlook as the Emissary.  Soon Sisko arrives on the station and begins talking with the Bajoran people about their lives.  Much to Whatley’s surprise, Sisko tells the Admiral that he can stop worrying about his son.

As soon as Julian finishes Sisko’s treatment he tells them about a vision he had about locust moving to Cardassia.  Soon Julian asks Sisko about his headaches and informs the Captain that his neural ganglia will need to be re-polarized which will cause Sisko’s visions to cease all together.  Sisko refuses treatment with the full knowledge that he might die.  He is determined, however, to let whatever is happening to him run it’s course.

As Sisko discusses the matter with his family, Kai Winn arrives to help Sisko on his journey.  Jake and Kasidy are clearly upset, not understanding what Ben is going through, but he leaves with Winn regardless.  Soon, Ben prepares for an orb experience with Kai Winn in the Bajoran Monastery on DS9.  Just as he is about to go in, a headache strikes him but he goes on with the experience.  Not long after, as Bajor is about to sign with the Federation, Sisko bursts in and informs the group that it is too soon for Bajor to join the Federation.  He rants about Locusts and that if Bajor does not stand alone then it will fall just before collapsing on the ground.

In the infirmary, Jake and Kasidy debate over treating Ben for his condition as it will mean his life or death.  Julian leaves the decision up to Jake who struggles with the choice eventually allowing Dr. Bashir to perform the operation to save his fathers life.

Ben awakes in the Infirmary upset that they took the visions away.  He claims that he almost had it, almost understood it all but now that understanding is gone.  In his office, Ben is visited by Admiral Whatley who asks Ben to contact the Bajoran ministers and ask them to sign the agreement.  Sisko declines the request much to the Admirals dismay.  Whatley informs Ben that, if it were not due to how much Bajor loves Sisko, the Captain would have lost his commission. Ben assures the Admiral that one day Bajor will join the Federation, he is sure of it.

Back in his quarters, Ben reunites with Kasidy and Jake knowing that, although he has lost his visions, he still has his family.

I am normally not a big fan of the overly religious episodes even though I do find the Bajoran Faith to be a fascinating subject.  Here are a people who follow a group of beings known as The Prophets and accept the their teachings through Prophecies that have been both proven and disproven time and again.  Many of these people use this blind faith for their own benefit (Kai Winn) while others do all they can to lead their people to a brighter more dignified path (Kai Opaka).  Sounds a little like an analogy to many of our own world religions but the key difference here is that, even though they have physical proof of the Prophets, and can sometimes interact with them, the Bajoran’s still come across as lost and desperate people.

Enter The Emissary.  From the beginning, Ben Sisko had no desire to  be known as The Emissary to the Bajoran people.  It was something that he felt uncomfortable with until later when he started realizing that maybe there was something more to it.  As part of what is known as the Emissary Trilogy by fans, this episode marks the third of this sequence following both Destiny and Accession.  It is in these pivotal episodes that we see Sisko’s attitude toward his calling change from a complete denial of the position to the full acceptance as a major part of Bajor’s future.  That being said, Sisko’s journey is far from over and he will be forced to serve two masters, The Federation and the Prophets (aka the Wormhole aliens).

Actors Avery Brooks, Cirroc Lofton, Penny Johnson and Nana Visitor dominate the screen showing their versatility and genuine struggles with Sisko’s and Bajor’s choices.  I am also always impressed by how villainous Louise Fletcher makes Kai Winn, making her one of my favorite characters to hate. That being said, I love that Penny Johnson is back as Kasidy Yates.  Yates was a great balance to the Star Fleet Captain Sisko and it seems he is going to need her influence a little more in the coming years.

Overall, this episode not only does a wonderful job with Sisko’s character development but also puts into motion some of the events that take place this season and beyond.  This, essentially, is a linchpin episode and foretells some major events that are on the horizon.

Thanks for reading the Retro TV Review,  I look forward to discussing the rest of the series with you, one episode at a time every Monday, Wednesday and Friday!  Next Review: The Darkness and the Light