Season Six begins and we are knee deep in the Dominion Invasion.  Be warned, this is a season fraught with change and consequences, some you might not particularly like. Serving as the opening to the penultimate season of one of Star Trek’s finest series and originally airing on September 29, 1997, this is A Time To Stand.

It has been months since the Federation lost Deep Space Nine to the Dominion and it is clear the war is not going well. With the crew dejected and demoralized, it is up to Sisko find a way to turn the tide.

The Federation fleet is in ruins.  With Sisko commanding the Defiant in the lead, it is clear moral on board is less than favorable.  It has been three long months and everyone is feeling the fear that they will never defeat their enemy from the Gamma Quadrant. Soon Doctor Bashir informs Sisko that they have been reassigned to Starbase 375 as he has received word that the Seventh Fleet has met with a disastrous defeat.

On the flip side it seems that Cardassia and The Dominion are celebrating their continuous victories against the Federation.  Dukat believes that, withing no time at all, the Federation will fall and will soon become another subject of the Cardassian/Dominion alliance.  On the station, Kira continues to try to gain the upper hand but finds working for Dukat and Weyoun to be challenging at best, specifically the Cardassian Commander. Later, Kira and Odo discuss the matter at hand pointing out that they are getting closer to the time of the Occupation than ever before.

On Starbase 375, Sisko learns that he has been relieved of his duties aboard the USS Defiant.  Dax is distraught at the idea that they are losing their ship but insists that they keep the crew together no matter what.  Sisko takes the time to contact his father to tell him about Jake’s decision to remain behind.  Ben promises that he will get Jake back, no matter what.

After discussing the matter with his father, Sisko learns that the Federation has plans to send Captain Sisko and his crew to Dominion territory in the very Jem’Hadar ship they themselves captured. Their mission, to destroy the manufacturing plant responsible for making Ketracel- white landing a blow to the Dominion they will not be able to recover from.   They soon begin their shakedown and begin their mission into Dominion Space.

On Terok Nor, Jake confronts Weyoun to conduct an interview and learns that none of his articles have been making it outside of the station.  Meanwhile, Dukat informs Kira that he wants to rebuild their relationship to which Kira immediately rebukes him.  Soon she learns that Dukat regrets some of his decisions in allying with the Dominion but recognizes that there was little other choice as Cardassia itself was on the brink of total collapse. It soon becomes clear that he has other designs for Kira and, when he makes a blatant pass on her, she makes it clear his desires are far from welcome.  Soon Kira asks Odo to use his position as a ‘Founder’ to gain the upper hand.  Odo agrees and visits Weyoun, insisting that he has his Bajoran Security team reinstated.  Weyoun agrees despite Dukat’s protests but under one condition, Odo serve on the stations Ruling Council along with Weyoun and Dukat. Odo reluctantly agrees believing this will give him the upper hand.

After a brief skirmish with a Federation vessel, Sisko and crew make it their destination and prepare their attack. Just as things look promising, they find themselves trapped behind a security net that will only cause them to be destroyed the moment their hidden bombs go off.  Planning their escape, Sisko and crew barely make it out alive as the Ketracel Production facility goes up in flames.  Mission accomplished, but without Warp Drive intact, Sisko and crew begin their long trek home, a journey that will take them nearly 17 years to complete.

There is a lot to unpack here but man what a great start to the sixth season.  Not only are we in the early days of a full blown war, something that has never really been explored in the Star Trek franchise prior to DS9, but we see a crippled and somewhat defeated Federation to boot.  Never before has the Federation faced such a threat to their very existence.  Sure, the Borg were a menace but, in the end, those battles managed to be taken care of in a rather quick and efficient manner, this time, however, there are consequences beyond just a touch of PTSD.

Immediately you notice how on edge everyone is.  It has been three months of battle with the Dominion forces and, with the loss of DS9, the crew are clearly reaching the end of their tolerance.  They are tired, worn out and their usual personality filters have all but been removed.

You can see this the most in Bashir. While we had gotten used to the intelligent, slightly egotistical Doctor, Bashir was one that normally kept a cool and pleasant demeanor. Now however, we are really starting to see the rather defeated cynic that almost echos the personality of Doctor McCoy himself.  Not only that, Julian has come to the point where he has fully embraced his Genetic enhancements, not hesitating to use this extreme intelligence to his benefit, unfortunately it seems others, namely Garak, see this as nothing but a dive into Julian’s already over-inflated ego. Julian’s embracing of his genetic manipulation will be a major part of his character this season and we will get a chance to really explore how this revelation has and will affect him as the season progresses.  It is a nice change for him, giving his character a new arc. 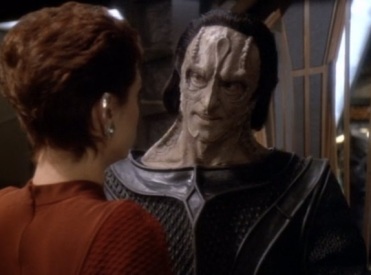 Among the seeds planted, one obvious issue is Gul Dukat and his tenuous partnership with the Dominion.  It becomes painfully clear that Dukat is realizing his mistake and, while he is too proud to admit it, the Dominion is much more of a force to be reckoned with than he had previously believed.  I have to think that Dukat actually believed that he would be able to manipulate the Gamma Quadrant Empire but has soon discovered that he is not as ‘in charge’ as he had believed he would be.  Always one to be the ruler and not the ruled, it is obvious that Dukat is planning something, or at least is beginning to in that devious mind of his.

Outside of Julian’s personal growth and Dukat’s dilemma, this episode gives us some very solid seeds of what is to come, from Worf and Jadzia’s relationship to Jake’s time behind enemy lines. We even get a glimpse in to what is sure to be a struggle for Odo as he begins to get a taste for what it means to be a Founder.  Of course, there is the matter of the the Defiant crew being stuck behind enemy lines, but I am sure that will be resolved in the next episode…right? 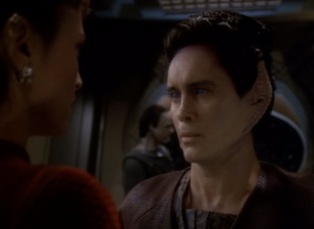 Thanks for reading the Retro TV Review,  I look forward to discussing the rest of the series with you, one episode at a time every Monday, Wednesday and Friday!  Next Review: Rocks and Shoals