In the Penultimate episode in the Dominion Invasion, Sisko begins his plan to retake Deep Space Nine. Originally airing on October 27, 1997, this is Favor the Bold

Sisko hatches a plan to retake Deep Space Nine while Rom faces certain death at the hands of his Dominion captors.

Story A: The calm before the storm

On Terok Nor things look bleak for Rom. Kira and Quark discuss the matter convinced that Odo has not become a collaborator for the Dominion. Attempting to visit their old friend to clear the air, the two soon discover that Odo is refusing any visitors in order to better connect with the Female Shapeshifter.

In Odo’s Quarters, it is clear that Odo and the Female Shapeshifter share their deepest thoughts and feelings with one another. It is clear that Odo has lost himself when he is informed that he has been in his quarters for three days and has missed out on the on-goings of station life and, in turn, his friends. It soon becomes a moot point when the female changeling draws him into a link once again.

Soon Kira learns that Weyoun plans to execute Rom for his participation in the minefield and the attempt to prevent the Dominion from taking it down. In the holding cells Leeta and Quark try to comfort Rom into keeping the faith that he will make it through somehow. Quark is determined to save his brother but when Rom asks Quark to focus on preventing the Dominion from taking down the mine field, Quark begins to realize there is more at stake than just his brother’s life.

Thinking she has a chance to sway Gul Dukat’s mind using Ziyal, Kira asks her friend to talk to the Station’s new commander. Ziyal does as asked and, even though she tries to use his ego against him, she soon finds her father is less of a benevolent man than she wants to believe.

Kira soon finds herself at odds with the newly promoted Gul Damar who is clearly having a crisis of his own. Using the time he has to drown his fears and anxieties, Damar begins to spill his secrets to Quark. There Quark learns that the minefield will be down in a week. Quark soon shares this information with Kira and, with Jake’s help they find a way to get a message to Starfleet using the most unlikely of sources, Morn.

Watching the mines go out one by one, Dukat and Weyoun begin to discuss the invasion fleet waiting behind the wormhole. They are soon interrupted by Damar who informs them that Star Fleet is gathering it’s ships and they believe that their enemy is up to something. Damar is sickened by the lack of respect shown to his commander by Weyoun and Dukat asks Damar for a favor. He wants the new Gul to have a discussion with Ziyal to convince the young woman to speak with Dukat so that she will be by his side in the end.

Ziyal is beside herself and discusses the matter with Kira. She is even more upset when Damar informs her that she needs to speak to her father. Ziyal refuses to comply informing the man that she is not a ‘true daughter of Cardassia’. When he tries to force Ziyal to come with him Kira takes the opportunity to incapacitate the Cardassian Officer leaving him unconscious in the cargo hold.

Dukat has received word that the Federation has launched an invasion fleet and is soon visited by Damar who informs his commander of what has occurred. Weyoun makes it clear that Dukat’s personal matters need to be set aside in order to prevent the fall of Terok Nor but it is clear that Dukat has become distracted by his family issues. 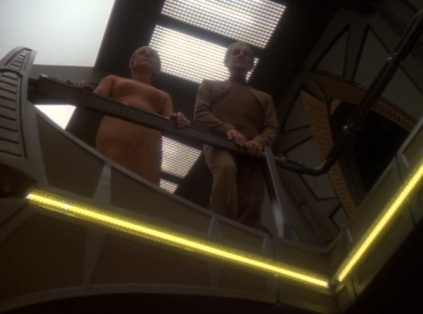 Story B: Fortune Favors the Bold. 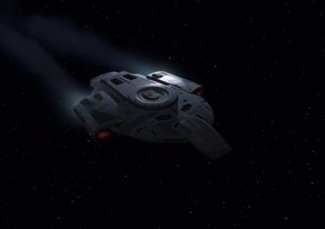 Venting plasma and drifting in space, the Defiant has certainly seen better days. Just as they are attacked by Dominion Ships, the IKS Rotarran appears and blasts the enemies out of existence. It soon becomes apparent that the Defiant has been playing decoy in order to take out Jem’Hadar warships in the area. As soon as the dust has cleared they are ordered back to Star Base 375 much to their frustration.

Jadzia returns informing Sisko of her frustrations and Sisko informs her of her plans to take back what they have lost. They are returning to DS9.

With Starfleet behind him, Sisko finds that the Klingon Defense Force has other ideas. Gowron has no interest in leaving Qo’nos without a fleet and refuses to join in the battle. Worf and Martok head to their home planet to convince the Klingon leader to back this last effort in saving the Alpha Quadrant.

Receiving news that the minefield is coming down in a matter of days, Sisko and Admiral Ross begin their launch to take back Deep Space Nine. Sisko knows he has a long road ahead of him and informs Ross that he has plans to eventually retire to Bajor when the time comes. He has come to see the planet as his home.

Nog meets with O’Brien to inform the Chief that he has been promoted to Ensign due to his time in the war. Boarding the Defiant, they welcome Sisko back to the Captains seat and begin the launch of the invasion fleet. Soon the find themselves facing a battle like no other.

As a part of the larger story arc it is hard to isolate this particular episode as a ‘good’ episode or not. This is far from a stand alone episode but has some very key movements on the chess board that bring us to a very impactful conclusion.

Lets start with the obvious, Ben Sisko and his plans. So far, it has seemed that Sisko has been taken off of the front lines in favor of a simple desk job for the Federation. The reality is though, that he has actually been planning the final push into Dominion occupied space to retake the station and secure the wormhole from any future invasion. This plan has been carefully kept in the background so far and, now that it has finally been instigated, he finds himself with the full backing of Star Fleet but also with only a little bit of time on his hands to achieve his goal.

We also see him beginning to realize that he has found a home in Bajor that he never though he had before. Up until now he has always viewed this planet as not much more than an assignment but, over time, he has not only accepted his role as the Emissary but has come to care for these people. This deep connection means that he will stop at nothing to be there to prevent any further harm to Bajor.

On the station front, We finally see what is going on with Odo and his inner turmoil over his place in the universe. Imagine not knowing who your parents where and, after years of being raised a good person, you discover that they were mass murderers who destroy everything in their wake. On top of that, they want a relationship with you now that they have found you. What do you do? Do you try to find goodness in them even though it is clear that it would be futile or do you ignore your one chance to learn about your own family history? This is the conundrum facing Odo but on a much deeper and personal level. Not only do his people have information for him but they can share it in a deeply connective way. Losing himself in this attempt to find a connection, it is only a matter of time before Odo realizes his mistakes, especially when it comes to Kira, and, hopefully, can correct them in time.

Then there is Ziyal and Dukat. While we haven’t really had Ziyal on the series for long, she has become a very important part of both Kira and Dukat’s lives. For Kira, she sees the one good think that Gul Dukat has contributed to the universe. Here is an innocent child who represents a unification between Bajor and Cardassia that can never really exist. It is a dream that has long since been demolished by people such as Dukat and, to some extent, Kai Winn. Kira deeply cares for Ziyal as a person but sees her strange devotion to the father she never really knew.

Dukat, on the other hand, acts as if he cares for Ziyal but he only really cares for what she can give him not for who she really is. Everyone in Dukat’s life is a pawn in his attempt to be on top. The moment someone is no longer useful to his game, Dukat will find a way to dispose of or sacrifice that piece for what he considers the greater good. It is only a matter of time before he sees Ziyal as more of a liability than a benefit and, when he does, Kira better hope she is near by.

Overall, solid episode but still just a cog in the larger story.

Thanks for reading the Retro TV Review, I look forward to discussing the rest of the series with you, one episode at a time every Monday, Wednesday and Friday! Next Review: Sacrifice of Angels