With the year coming to a close I realized that I almost missed out on reviewing the latest album from one of my favorite bands, Guster. I mean, sure I could have reviewed it next year but there is something about discussing new music when it is still rather new and I had to fit this one in before the year…err the Decade…ended.

To say this is a fantastic album simply does not do it justice.  It is a a singular piece of art and fits in perfectly in their progression and evolution that started twenty four years ago with their album entitled ‘Parachute’. 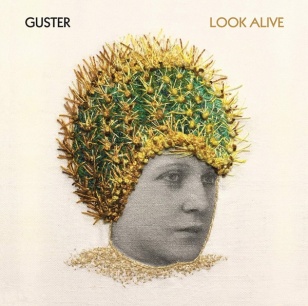 I started listening to Guster sometime in 1998 after discovering their music via New Music Monthly.  The song was off of Goldfly and entitled The Airport Song.  Since that day I followed them somewhat religiously.  Anytime I found something new, I had to listen to it and dove in to each and every track with a feverish fervor.

When it was announced that they had yet another hitting the record shops after their incredible 2015 effort, Evermotion, to say I was excited would be an understatement.  Having already had a chance to see them live I was even more addicted to their music than ever before and, so, the promise of new music was something like that of an addict getting a new fix.  I was jonesing for it and, honestly, the high this new album provides has been well worth the wait.

To put is simply, Look Alive is everything you could want from a Guster Album. From the quirky fun of the track Overexcited to the melancholy of Not For Nothing, this album just keeps providing. Led by the incredible vocals of Adam Gardner and Ryan Miller, it almost feels as if this album is the band’s swan song and I hope and pray I am wrong.   Much like the near perfection Abbey Road was for the Beatles, Look Alive pulls together the finest efforts of the band as a whole.   Adam and Ryan sound fresh and inspired while Brian Rosenworcel on drums and Luke Reynolds on bass, guitar and more, pull together in a way that seems revitalized and well, Alive.  I am not saying that their previous few releases were lacking, quite the opposite in fact, it is just that Look Alive is simply that much more together, something I honestly did not think was possible.

If you are not familiar with Guster, this is an excellent album to jump in on.  It provides new and old fans alike with a fresh start, making me even more excited for what they have in the hopper for the 25th anniversary of their very first album.  I know that Adam and team won’t let me down, they haven’t yet.

I don’t like putting opening track as one of my favorites but the title track, Look Alive has such an impact that it is necessary to mention. In a complement to the final track, below, it is a song that remind you that you need to keep fighting. That even if things are tough, NOW is the time to stand up and face the dark with love, life and a song in your heart.  Stand Up,  Look Alive.

The ‘final’ track on the album is something to behold.  It is a subtle reminder that no matter how beat up and crushed you may feel, you have nothing left to loose and what you do is not for nothing. It reminds you to keep trying, the effort is well worth the pain we are feeling now.

Finally, Guster is not always serious and frankly neither should they be.  Overexcited is a wonderful example of their incredible quirkiness and is a serious delight to listen to.

As usual, you can get your physical copy here for about $16.  Totally worth it as, if you get a physical copy you get a bonus song entitled When You Go Quiet.   So, certainly worth the physical copy huh.  Or you can go with Spotify if you don’t mind sacrificing the chance for one more song… just sayin.

Guster is on tour at the time of this writing and, having seen them live, they are totally worth it.  Go just GO!!!