Enter Luther Sloan.  Originally airing on April 8, 1998, this is Inquisition.

Preparing for a medical conference on Casperia Prime, Julian’s plans are interrupted when Luther Sloan from Starfleet Internal Affairs informs Captain Sisko that a member of the Command team aboard Deep Space Nine is suspected of passing vital information to the Dominion. Due to this, the entire senior staff have been revealed of duty and confined to quarters.

After spending some time in his quarters, Julian is escorted to the wardroom to be interrogated by Luther Sloan.  It is immediately clear that Sloan suspects Julian of being the mole when the investigator brings up Bashir’s confinement by the Dominion sometime back.  He begins going over the Doctor’s service record, with a particular interest in his work with his Genetically enhanced friends. Upon completion, Julian is sent back to his quarters with a promise of a breakfast to be delivered to his quarters only to receive Worf’s Gagh instead of his scones.

Soon Bashir is contacted by Miles O’Brien who indicates that he was questioned about Julian. His transmission is abruptly cut off only for the two guards to enter, informing Julian that Sloan wants to talk again.  Sloan immediately launches into his questioning, focusing on Julian’s time imprisoned by the Dominion.  Soon it is clear that Sloan believes that Julian is a sleeper agent for the Dominion having been turned while under incarceration.  This entire investigation is being conducted to prove Julian’s complacency  in the matter. After getting nowhere with Julian, he is arrested and taken through the Promenade in handcuffs to a holding cell where Odo is notably absent.

Sisko visits Julian demanding ten minutes alone with his officer.  Sisko informs Julian that Sloan appears to have a vendetta against the Doctor after losing a son in an attack by the Jem’Hadar.  Even though Sisko believes his experience to be a conflict of interest, Sloan dismisses the issue and informs the Captain that all contact with the prisoner go through Sloan.  After insisting that they be allowed to talk privately, Sisko promises to get the the bottom of things.

Sloan continues to interrogate Julian going over moments in his past where he came in contact with the Dominion and the Jem’Hadar.  Pinpointing key moments in his career, Sloan uses his evidence to built a circumstantial case against the Doctor constantly spinning Julian’s words against him. After a lengthy interrogation, Julian finds himself back in his cell facing charges of conspiracy and treason.  Sloan informs Julian that he will be detained in a maximum security facility until the war is over but, just as he is about to be escorted out, Bashir finds himself beamed aboard a Dominion warship facing Weyoun himself.

Weyoun informs Julian that he is ‘among friends’ informing the Doctor that Star Fleet has discovered the truth about him.  Weyoun acts as if they have had the same discussion before with Julian claiming he is not an operative and has no interest in helping them.  Weyoun tries to convince Julian that they convinced him to join them while Julian was being detained.  Soon Julian realizes that both Weyoun and Sloan are both trying to convince him that he is a traitor and figures out that Sloan himself is the traitor.  Suddenly the Dominion ship is attacked and Julian is rescued by Worf and Kira.  Beamed back aboard the Defiant, Sisko questions Julian about being ‘rescued’ by Weyoun.  Even though Julian is determined, it seems that no one believes that he is innocent.  Julian realizes that something is wrong when Miles reacts without pain having not hurt himself kayaking.  Realizing it is an illusion, suddenly the room shifts and Julian finds himself on a holodeck.

Sloan, now dressed in black, admits that he has been testing Julian to determine if he is an operative of the Dominion.  Julian is furious about his treatment but Sloan has no plans to relent. Sloan proves his point when he removes an implant behind Julian’s right ear, it appears they have been recording his brain waves.  Using the data, Sloan proves Julian’s innocence and informs the Doctor that Sloan is actually a part of a clandestine branch of Star Fleet known as Section 31.  Sloan was there to ferret out a potential threat to the Federation.  Apparently Section 31 has been in operation since the dawn of Star Fleet and work autonomously throughout the galaxy.  Sloan turns the tables when he offers Julian a job as part of the organization.  Julian refuses but Sloan leaves the offer on the table. 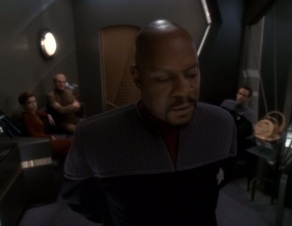 After being returned to DS9 it appears none of the events actually happened with Sloan using Julian’s Medical Trip as a cover for his objective.  Filling in the major staff of the events, Julian is shocked to hear that, when Sisko asked Star Fleet about Section 31, they neither confirmed nor denied their existence.  It seems there is a dark side of the Federation and Sisko instructs Julian to accept Sloan’s offer the next time the man shows up.

Section 31 takes it’s name from the original Starfleet Charter, specifically Article 14, Section 31.  This section allowed Star Fleet to take extraordinary measures in times of extreme threats to the Federation itself.  Using that guideline, a special group was formed to protect Star Fleet and the Federation itself by literally using ‘any means necessary’. A dangerous prospect for sure.

While I am not a huge fan of Section 31 as a whole, especially their rather ‘public’ treatment in Star Trek Discovery, I will admit I love how they are introduced.  Don’t get me wrong, I am all for adding to the lore of Star Trek and there is no doubt that a group like Section 31 could exist underneath the idealistic government of the Federation but the admission that something like it exists undermines much of what Star Fleet stands for.  In a way I wish that they had been introduced in a slower more subtle process but, seeing we only have a season and a half left, I doubt that would have been possible.  Shame really.

Overall, this is a really solid episode that really does a great job keeping you on your toes. Siddig does an incredible job as the lead in this one giving Julian a much deeper dive than he is used to. It isn’t common for Julian to get a chance to be on the forefront but when he is, he really nails it.  On the first viewing it is shocking to discover that most of the episode happened on a holodeck and that the only ‘real events’ were prior to Julian’s pending trip and after he is returned to DS9.   I have to wonder though, if someone didn’t show up to an event wouldn’t you think they would have contacted DS9 to inform them that he never arrived?  Then again, I guess Section 31 would have found a way around that too.

Thanks for reading the Retro TV Review,  I look forward to discussing the rest of the series with you, one episode at a time every Monday, Wednesday and Friday!  Next Review: In The Pale Moonlight