Brainwashing.  Conditioning. Indoctrination. re-education.  Whatever you call it it is all the same, making someone believe or act on something they would not normally believe or act upon.  In this case we have our very own Manchurian Candidate…only this time it is aboard the Enterprise.  Find out who in the episode that aired on May 27,1991.  This is The Mind’s Eye.

On his way to Risa for a symposium, Geordi Laforge is kidnapped by the Romulans and brainwashed so that he will assassinate a Klingon delegate.  If not stopped, this could critically wound the Federation/ Klingon alliance.

After being kidnapped, Geordi undergoes a terrible torture by a Romulan officer aboard a Romulan Warbird.  They slowly condition his mind through various negative stimuli and even force him to ‘kill’ Chief O’Brien in s holographic simulation.  Once they have completed their conditioning, he is returned to the Enterprise with no memory of what has happened.

The Enterprise is escorting Klingon Ambassador Kell to assist a Klingon colony who is fighting for its independence.  Kell reluctantly works with Worf, citing Worf’s discommendation, but later acknowledges that Worf acted in accord to the Klingon way when he killed Duras.   Kell seems not to trust the Federation as he believes that they may be assisting in the Kriosian rebels who have been attacking the Klingon colony.   While on the colony, they discuss the matter with the colony leader, Vagh, who also feels the same.

His evidence is that they found some Starfleet weapons in the hands of the Rebels and, while Picard disagrees, Vagh claims it must have come from the Federation.   After examining the evidence, a Starfleet phaser rifle, LaForge and Data discover that it is a Romulan reproduction of a Federation weapon, indicating that the Romulans are involved.

This whole time LaForge has been receiving transmissions from the Romulans and, while this is occurring, he is unaware of his actions.  He eventually beams weapons to the planet while deleting the evidence along the way.   The Klingons discover this transmission and immediately assume that the Enterprise did this willingly.   LaForge and Data, under orders from Picard, begin to search for the culprit unknowingly searching for LaForge himself.  After investigating the site where LaForge sabotaged the transporters, Worf determines that someone on board is indeed a spy.   LaForge is, of course, the only person without an alibi but is not suspected.   All along, Data and Riker have been noticing E-Band transmissions on occasion which happen to correspond to the signals sent to LaForge via his VISOR.

That night as Ambassador Kell is dining in his quartiers, LaForge arrives in his room.  It is then revealed that Kell is the traitor and instructs LaForge to kill the Colony Governor Vagh.  LaForge is to claim that he is acting on behalf of the Federation in defence of the Rebels. Later LaForge begins having nightmares and visits the Doctor to see what is going on.   She examines him and finds nothing wrong. 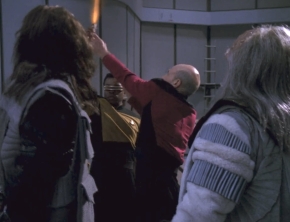 As Data investigates the E-band emissions he is lead to inspect the shuttlecraft Geordi returned home in, he soon realizes that it is LaForge who is compromised.  As he is completing his investigation, LaForge begins his mission to kill Governor Vagh. Data warns Worf of the situation just as LaForge begins his attack.  LaForge is stopped and Data arrives to inform Picard and the Klingons what has transpired.    Data reveals that someone on board is a Romulan accomplice who was near LaForge each time a signal was detected.  Only two people could be guilty, Picard and Kell.   Vagh takes Kell with him realizing that he is indeed the accomplice.

In the end, LaForge discusses the situation with Troi.  He has memories of Risa and he can not accept that they were implanted.  She ensures him that they will get him back to normal, no matter how long it takes.

We get another solid Geordi episode and Levar Burton pulls it off beautifully.  He plays the part with such integrity you honestly forget that he is only ‘acting’ at being brainwashed.   when he realizes the situation at the end, his pain and anguish at the false memories are so real it is almost painful to watch.

The episode itself really sets up things to come between the Romulans, Klingons and the Federation.   This has been building since the end of Season One with the episode Neutral Zone and is finally nearing one of its many peaks.  When Sela finally reveals herself it is a mindblower for sure and that is only a small part of what is to come in the next few episodes and beyond. 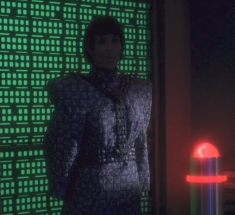 Picard apparently knows some Klingon swear words.  Makes sense as those are usually some of the first words people learn in a second language.

Although you don’t see her step out of the shadows, this marks the first appearance of Sela. (although if you pay close attention…her hair color is wrong.)  I’ll tell you who that is the next time we see her…

We don’t meet the Kriosians here (the rebels) but they do eventually show up on the series Enterprise.

This is the second time we have seen a member of the crew visiting (or attempting to visit) Risa.  The first being Picard in Captain’s Holiday.

Thanks for reading the Retro TV Review,  I look forward to discussing the rest of the series with you, one episode at a time every Monday, Wednesday and Friday!  Next Review: In Theory