With many unanswered questions stemming from the first film, Clive Barker returns with a deeper exploration of the beings known as Cenobites and their connection with Kristy Cotton.

Hellbound picks up moments after Hellraiser ends with Kristy Cotton locked in an insane asylum as everyone believes that he tale is nothing but the ramblings of a mad woman.  Soon they discover the truth about the cenobites and the origin of the lead Cenobite himself, Pinhead. This is Hellbound. 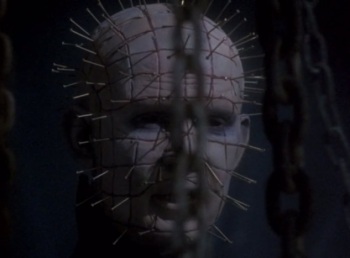 After the deeply intense film that was Hellraiser, I wanted to know more about the beings known as The Cenobites. After sneaking to see the first film, it would only be a matter of time before I found a way to watch the second and, by the time this one came to video my parents had pretty much accepted the fact that if there was a Horror film, I would find some way to see it.

It would be some time before I had the opportunity to watch it, probably on a Showtime free preview or over at a friends house, but watch it I did. Almost immediately it was obvious that this would be a darker and bloodier tale of terror. It seemed that the producers ordered triple the blood and gore from the first film and reveled in it.

It is pretty obvious from the start that Clive was much less involved with this one than he was in the first installment.  While he may have provided the basic story there is a distinct difference in the feel and overall tone that is presented in Hellbound. In many ways, this installment almost feels as if it is trying to recapture the vintage tones established in the 1931 Frankenstein film but with a much bigger budget and a lot more gore. 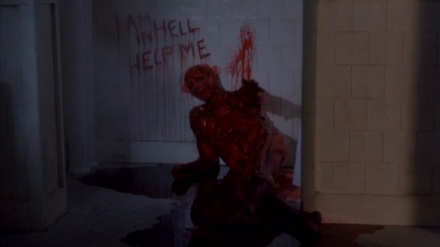 To say it is a good sequel is almost going too far.  This one, while I loved it (and I’ll be honest several of the sequels as well) growing up, Hellbound is not the film I remember it being in my youth.  Sure it provides a great backstory to the Cenobites and manages to really establish Pinhead and his entourage as some of the best creatures in horror, but there is something lacking in this one that makes it pale in comparison to the original film.  In many ways, this is a prime example of how a studio rushes into making something based on their over-excitement from the original. 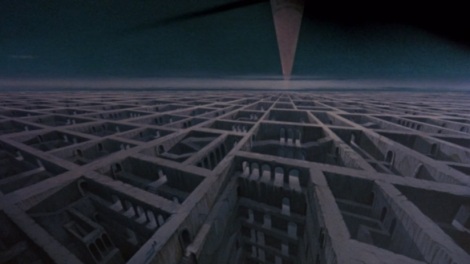 While it pales in comparison to the first entry, the imagery in this one is something to behold.  From Escher labyrinths to otherworldly domains, this is one that has plenty of incredible visual delights through and through.  The costume and set designers were clearly in love with the property and their work more than outshines the extreme violence and lackluster pace of the film itself.  It makes me wonder what they could have done with Barker at the helm instead of taking a back seat in his own property.

To say it’s a bad film isn’t fair either as it is a well produced and intricate offering who’s only fault is that it dove too deeply and too greedily into the mythos that Barker provided as a basis.  Had it paced itself and not taken it to the extremes it did, I think it could have been a worthy successor. Interestingly enough, there are elements in this that were later reexamined by Barker in his excellent film, Nightbreed, but in a much more satisfying manner. It is those few moments in Hellbound that really shine as it is clear that they have Barkers touch on them. Sadly, it seems the filmmakers chose to only touch on Barkers concepts instead focusing on the gore and blood providing little intrigue and even less substance.  My recommendation, watch the first one and dive into the comics from Boom Studios, in all honesty, those are so much much better than this one.

If you are into self punishment or just have a love for all things Cenobite you can get this one packaged with the first one in a set for about $15.  It’s not bad, just not as good as the first one but for this price not a bad deal.

Needless to say, there was a time when I was obsessed with these films and watched every one that was produced.  The sequels after this one are bad, no doubt but the good kind of bad that make for a great B-movie night.

And now, the trailer: