Commander Kor tries to find his place in the universe in the episode that originally aired on November 11, 1998.  This is Once More Unto the Breach.

Station Log Stardate Undetermined: Once More Unto the Breach

Commander Kor arrives on DS9 to find a way to join in the battle with the Dominion, unfortunately his one chance to do so holds a grudge against him.

After discussing the difference between Davy Crockett the myth vs Davy Crockett the Man with Miles and Julian, Worf is confronted by the elder Klingon warrior Kor who requests that Worf speak on Kor’s behalf to be allowed to join them in battle.  After Worf and Kor lament and celebrate the death of their mutual kinship in Jadzia, Worf approaches General Martok who shocks Worf in a violent denial to allow the old warrior a place by their side in battle.

After planning for his sequence of attacks against the Dominion with Sisko, Martok encounters Worf on his ship who still wants to discuss the matter with Kor.  Martok demands the bridge be cleared, clearly upset at the subject.  Hearing his second in command out, Martok fills Worf in about his history with the elder Klingon Warrior. It seems that Martok has held a grudge against Kor for not signing off on his entry into the officers ranks causing the General to be forced to fight his way through to the top.  Worf informs Martok that he has assigned Kor as Third officer aboard a ship in the ninth fleet and Martok informs Worf that Worf is now responsible for Kors actions from here on out.

After meeting with Ezri in the replimat, Kor and Worf discuss the matter of Kor’s placement on a ship.  While displeased that he will not be in command of a ship, Kor reluctantly agrees to serve aboard the Ch’tank as the third officer.  Worf instructs Kor to stay out of Martok’s way while on board but it is clear the elder Klingon is going to be an issue. Reporting for duty, Kor arrives on the bridge despite Worf’s warnings and it is clear that Martok is unhappy when the crew are distracted by the presence of a ‘Dahar master’, with each of them giving Kor the respect of his position.

As the crew conduct their missions, Martok finds it exceedingly difficult to have the Dahar Master on board as he sees his presence as taking away from the General’s own command.  Soon it becomes clear that the Klingon Master is having issues with his memory when her starts to forget names and where he is meant to be.  This becomes a bigger issue when Martok and Worf are injured and Kor commands the crew into an attack that they can not handle.  It becomes even more clear when Kor instructs them to contact Kang and that they will take over the ‘Federation outpost’.  Kor is about to cause the destruction of the ship in his madness and, just when Martok is about to kill him, Worf steps in and knocks the elder Klingon out.  Getting the ship to safety, Worf and the crew proceed to their planned rendezvous but it is obvious there is little hope for Kor to regain his status. This is compounded when Martok confronts Kor about his mistake in front of his crew members. As Martok relishes in the elder Klingon’s mental issues, Kor reminds the younger General to enjoy life before it is too late to be effective.

With Kor relieved of duty, the crew discover they are being followed by a fleet of Jem’Hadar ships.  Worf volunteers to command the Ning’tao in a suicide mission against the ships allowing the rest of the fleet to escape.  As he prepares for his final mission, Darok (Martok’s advisor) visits Kor and encourages the shamed warrior to take command of the Ning’tao in Worf’s stead.   After reviewing Worf’s plan, Kor confronts the Worf and renders him unconscious, promising to relay Worf’s love for Jadzia to her when he meets her at the gates of Stovokor. Taking command of the Bird of Prey, Kor heads out meet his fate.

On the bridge of the Ch’tang, Martok is shocked to learn that Kor has saved their lives in his attack against the Jem’Hadar fleet.  When Kor manages to succeed in his mission, the crew, including Martok, celebrate the elder Klingon’s success in his mission.  For Kor, it was indeed a good day to die.

What a great way to see the last of the Original Series Klingon out with honor.  Kor, first seen in the classic episode Errand of Mercy, is the last of three classic Klingons that not only set the stage for what Klingons were to become but are recognized as some of the most Iconic legends of their time. 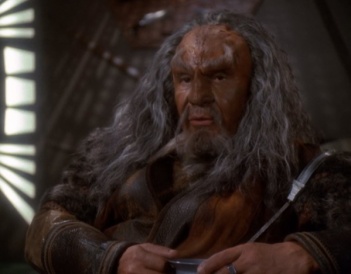 The story itself is of a simple theme, the difference between a Legend and a Man.  In the opening sequence, we see Miles, Julian, and Worf discuss the battle of the Alamo and whether Davy Crockett was indeed the hero he was believed to be or just a fallible man who could never have done what the legends claim.  Worf makes a brief statement that the view of the man matters only if you believe whether he is a legend or not, not realizing that he would be faced with a similar situation with a Living Klingon Legend in the form of Kor.

This is where we get into the meat of the story.  What makes a person a legend and, if that legendary status is challenged, do their past exploits still matter? To many, Kor is the living embodiment of a legendary hero.  Having fought the likes of James Kirk, multiple Romulans, and even taken down the Albino with his companions, Kor has lived long enough to witness his own legendary status.  For Klingons, this is not always a good thing, in fact, to die of old age is considered a great dishonor and Kor, being a warrior at heart, wants to prevent this at all costs.  Unfortunately, his only chance is through someone that hates him and he has no ideas as to why that is. 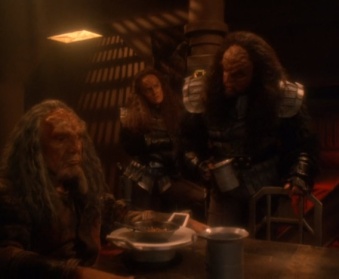 The thing that drove me nuts about this episode is how quickly the younger Klingons followed Martok’s lead and turned on Kor when he slipped into the past during the battle.  Sure, he did almost kill them all, but to stand there and make fun of a living legend seems almost beneath the Klingon culture.  For a culture that is so steeped in honor and heritage, to make fun of him is a pretty dishonorable thing to do.  The only one I can almost understand is Martok due to his perceived slight from Kor, but even he must realize that this sets a horrible example in front of his crew.  Thankfully, In the end, not only did Kor live up to his own legend, he was allowed to die an honorable death.  Every one of those Klingons that ragged on him should feel ashamed of themselves though.

While we never really learn why Kor blocked Martok’s entry into the Klingon Defense Force as an officer, I doubt it was due to the lack of station.  Even though Kor mentions this as a possible reason, I have a feeling that, even though Martok had the potential, Kor probably saw that the young Klingon needed to experience the hardships as a warrior before being allowed to lead others into battle.  Kor has always been a bit of a  traditionalist (despite his open nature to other races) and, in traditional Klingon culture, no one is given leadership, leadership is earned. In many ways, Martok owes Kor his career as, had Kor granted his appointment, Martok would not have been the General that he had become.  In fact, he would probably have been dead at this point, not that such a thing is bad in the eyes of Klingons but still.

Outside of the Klingon-centric nature of the episode there is a small B story that finally begins to address the Jadzia/Ezri conundrum.  There is a great moment with Ezri where she is talking with Kira about her wish to join Kor in battle again. Unfortunately Quark overhears this conversation and assumes she is talking about Worf.  Later, Quark confronts Ezri about the situation and Ezri makes it clear that she has no interest in pursing her former hosts husband.  You get the sense that the writers finally said, ‘ok let’s get this over with’ and set the record straight before it could go any further.

Overall, Between the great story focusing on the end of the Legendary Kor and the nice moments with Ezri, this is yet another solid entry into this season of Deep Space Nine.  Lots of good stuff so far and we are still pretty early in the final season, trust me, there are even more solid episodes to come.

Thanks for reading the Retro TV Review,  I look forward to discussing the rest of the series with you, one episode at a time every Monday, Wednesday and Friday!  Next Review: The Siege of AR-558