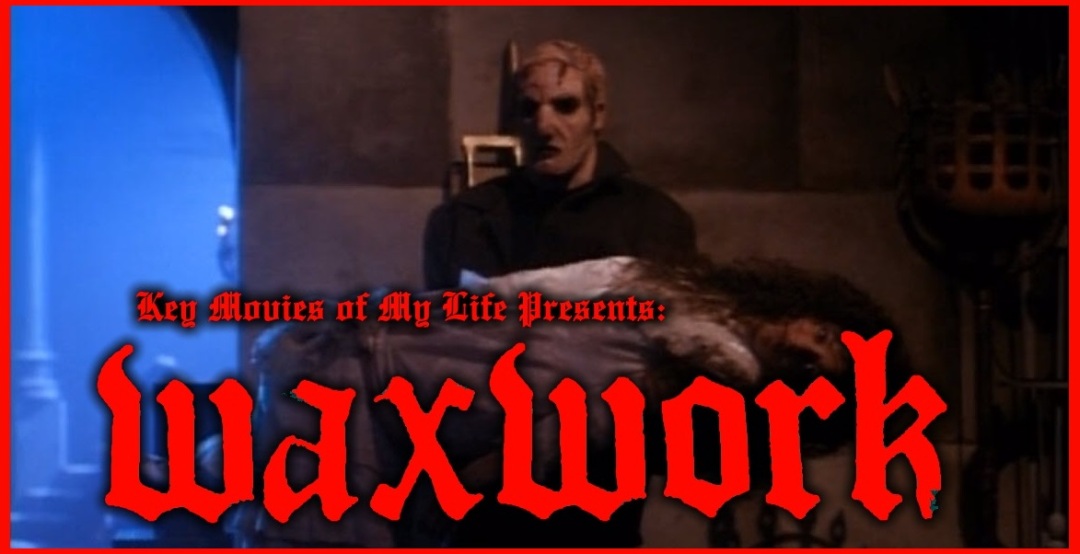 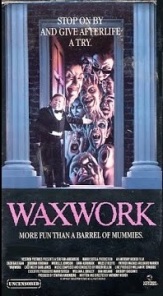 As I have mentioned before, horror was a key component of my life growing up.  During the 80’s and 90’s it was not uncommon to run across a plethora of horror films in the video rental stores, many of which would never see a wide theatrical release relegating them to be discovered by  hapless kids browsing the shelves of our local video store.

Today’s entry was one that I found on the shelf at my local grocery store’s offering for videos (yes, even grocery stores got in on the rental act back then) and it was the cover that intrigued me.  Depicting a creepy guy holding the door open for a number of horrors intrigued me and I knew I had to accept his invitation and see this film.   This is Waxwork.

In what seems like a semi-typcial 80’s teen flick, a popular group of highschoolers stumble across a wax museum in the middle of their posh neighborhood.  Operated by a strange man (played by David Warner), the teens soon find that the wax museum holds dark terrors in each of it’s wax displays.

As I mentioned above, this was one I found in our local video shop in my deep dive in to horror during the 80’s.  At that time, I was ravenous for anything and everything horror, scifi and fantasy that I could get my hands on.  Luckily, with the advent of home video, filmmakers now had a way to churn out movies for the hungry masses to see.

Waxwork falls under the horror comedy genre that was popular at the time, creating many of the Horror-B films we know and love today.  The thing that separates Waxwork from the majority of the releases is that it manages to make Wax Museums into a medium for horror itself.  You see, in this story, each of the displays act as sort of a portal into the realms that they depict.  If a person steps across the threshold they find themselves in the a very real version of the display and ultimately become part of the museum itself.   This explains how a wax museums manage to make such remarkably realistic statues and why they have signs asking you to never step into the displays themselves.

With an excellent cast including David Warner and John Rhys-Davies, this is one that still holds up to this day despite it’s campy nature.  Containing versions of each of the most popular creatures such as Werewolves, Vampires, Phantoms and more, this is a rather unique film that allows for a cool blend of time periods and creatures while telling various tales explaining each of the displays in the museum.  In many ways, this film serves as it’s own self contained anthology series in the vein of Tales from the Crypt or Tales From the Dark Side.  The film feels like it was inspired by the old EC comics of the late 40’s with it’s Gothic tones and classic horror vibes, I almost wonder if that was not the original intent.

While campy in moments, this is one that has managed to age fairly well.  With rather impressive budget effects and loads of blood, this is a must see for anyone who loves classic 80’s horror and enjoys a clever plot while also being able to turn a blind eye to the absurdness of it all. This film also managed to garner a sequel, Waxwork 2 Lost in Time (starring Bruce Campbell and Marina Sirtis) which further expands on the power behind the strange portals created by the Wax displays.

If you were really paying attention you would recognize a certain Billy Peltzer (Zach Galligan) in the roll of Mark.

You can get this one in a pretty great boxed set that has both Waxwork and Waxwork II in it. It’s a little hard to find these days but they are both available digitally as well so you wont have to look far.  We may have to cover the second film at a later date…