The Reunification of Vulcan and Romulus.  Two people who have been separated for centuries now have a chance to become one again.  Can the warlike Romulans and the Peaceful Vulcans come to terms with one another?  We find out more in the episode that aired November 11, 1991.  This is Unification II.

Picard meets with Spock who reveals that he is on Romulus in hopes to reunite the Vulcan and Romulan people.  However, the Romulans are planning to use this as an opportunity to spark a war with the Federation. 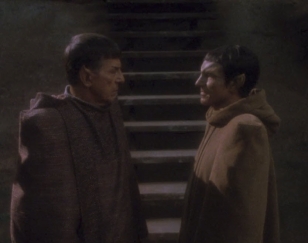 Picard and Data meet with Spock where Picard informs the Ambassador of Sarek’s death. Spock informs Picard that there are Romulans who wish to learn the ways of Surak of Vulcan and are wishing to embrace a reunification of the two peoples.  He insists that Picard leave as this has nothing to do with the Federation but the Captain refuses promoting Spock to compare him to another Captain of the Enterprise.

Despite Picard’s disbelief that the Romulan Senate can be swayed, Spock is convinced that a single person can be the cause of a vast change in the Romulan people.  This is evidenced by the appearance of a young Romulan who shows a deep interest in the history of the separation of the Vulcans and Romulans.  Senator Pardek indicates that the Romulan proconsul is willing to listen to Spock and his attempts at reunification. 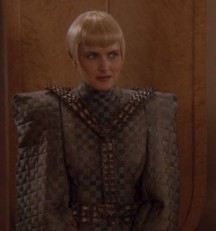 Spock and Proconsul Neral meet where Neral indicates that the Romulan Senate may be able to be convinced to support reunification. However, after Spock leaves it is revealed that Sela is behind this false front in support of reunification.  Despite the fact that this may be an attempt to expose those behind the movement, Spock insists that he continue to pursue his mission even if only to play along and expose the Romulan treachery for what it is.

Meanwhile Riker continues the investigation of the missing Vulcan ship and soon learns that a Fat Ferengi named Omag has the information they need.  After the Ferengi refuses to cooperate, Riker convinces him to help and learns that there is a meeting at Galorndon Core.  They proceed to the co-ordinates and are instructed by Picard, via subspace, to remain there.

Back on Romulus,  Sela reveals herself to Picard and Data exposing Senator Pardek as a traitor to Spock and his cause.   It appears that she is planning the Romulan conquest of Vulcan using the reunification of the two people as a guise.   The Romulans have stolen three Vulcan ships and are using them as a ‘Peace Envoy’ that will really be an invasion force.  Sela asks Spock to speak for them but, as he refuses, she reveals a holographic announcement that will speak to the Federation on his behalf.

Sela returns to be greeted by holograms of Riker and a rescue team, only to be distracted long enough for Picard, Spock and Data to disrupt their plans.  As the Enterprise travels to intercept the Vulcan ships,  Spock makes a widespread announcement that the Vulcan ships contain Romulan ground forces and should be stopped at all cost.  The Enterprise arrives in time to see a Romulan ship destroy the fake vulcan transports, destroying over two thousand of their own soldiers so that they could not be captured.

Sela is furious but is knocked unconscious by Data using a vulcan nerve pinch.  Picard, Spock and Data escape and when they are safe, Spock makes it clear that he will be remaining behind.  The Romulans who wish for reunification need guidance and he wishes to remain to assist them.  In the end, Picard allows Spock to mind meld with him so that Spock has a chance to have his father’s memories that were shared with Picard. 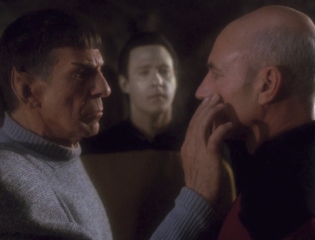 I personally love this two-part episode due mostly to the return of the great Leonard Nimoy to Star Trek.   This two part episode set up a wonderful storyline that, while touched on, is sadly never really followed up on in its entirety.  It is because of this that I feel that the episode, while good, is a bit of a miss overall.   That being said, This was a great way to re-introduce Spock into the Star Trek Universe and, even though we won’t learn any more about his activities on Romulus until the JJ Abrams movie Star Trek, it is assumed that he remained on the planet teaching young Romulans about the ways of the Vulcan people.

During the course of the episode we got a chance to really see the Data/Spock comparison that had been made before by a certain Starfleet Doctor.  In a candid conversation between Data and Spock it is gleaned that Data’s search for humanity and Spock’s abandonment of his are two sides of the same coin.  They each are pursuing what the other has.  Spock is pursuing a life of logic while rejecting his human failings while Data is pursuing a way to be more human while having a perfect logic and peaceful mind.

This is the last time we see or hear from Sela.  I assume she was executed shortly after these events having failed at her mission to invade Vulcan. 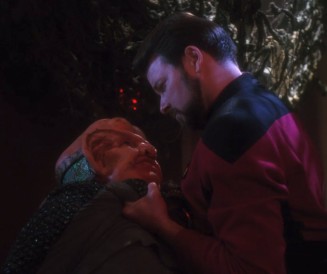 Riker gets a chance to get up close and personal with a Ferengi.  You certainly wouldn’t have seen beardless Riker being so badass.

We are introduced to Klingon Opera for the first time and learn of Worf’s…fandom for it.

For such detailed prosthetics, it seems Picard and Data can apply and remove it pretty easily. They are lucky some of it didn’t fall off while they were on Romulus.

Data uses the Vulcan Nerve Pinch for the first time and quite effectively might I add.

Thanks for reading the Retro TV Review, I look forward to discussing the rest of the series with you, one episode at a time every Monday, Wednesday and Friday! Next Review: A Matter Of Time